The new era of Star Wars: The Old Republic passed a milestone late yesterday when it launched the final chapter in the Knights of the Fallen Empire expansion. The fact that it launched several hours early actually gave me an opportunity to play through the last chapter twice, allowing me to see the end from a couple of different perspectives.

Just as I am watching a season finale for a television show, I’m left feeling both satisfied and empty at the same time. I want people to play through it themselves, but at the same time, I want to prepare players for a bit of disappointment.

As I review what is essentially the end of Knights of the Fallen Empire, I would like to warn you that there are some minor spoilers for some of the previous chapters, but I promise not to spoil the story of final chapter itself. If you have not played up to chapter 15, then now is your time to back out of this review.

Let’s talk about the good

The story is actually on par with a good television series. The characters are engaging, and the decisions made in the chapters feel like as if they have meaning and weight. If you play through the expansion more than once making different choices, you might be disappointed to learn that most of your choices are an illusion. However, one choice that you made early on does have some a meaningful consequence at the very end, and I am very happy about that.

I know that there are going to be people who will be disappointed at the ending of the KOTFE. I understand that disappointment because it feels a bit like something is left unfinished, but I would counter that by saying that a television season finale rarely ends the way you think it should. Many times when there isn’t something unexpected, or if there isn’t a continued conflict, watchers might feel satisfied, but then there is no compelling reason to keep watching.

Save for a handful of companions, there are good character arcs and growth throughout KOTFE. Even your character is clearly different at the end of the expansion than she was at the beginning. For me, a character arc is far more important than an empire crashing down.

You do get a satisfying boss fight. The last boss fight (I will not say who it is, but you can probably guess) had some very interesting mechanics and as a fight has been the most engaging so far. But that bar has not been set very high. If the boss fights leading up to this chapter had a similar level of complication, I might have given those chapters better reviews. Despite the bit of hand-holding — there were literally giant arrows telling you what to do — the fight was fun and more than dropping the enemy’s health bar faster than yours drops. 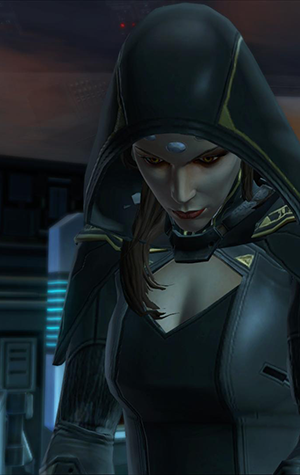 Let’s talk about the bad

There many things in this chapter that I hope we don’t see carry over to the next one. Thankfully, most of them are mechanics related and would not require any re-writes to the next chapter, as if I’m important enough for BioWare to listen to. However, I would like to talk about two parts of the story that did annoy me.

First, let’s look at the romance options. Perhaps it’s only because I have played multiple characters through the KOTFE storyline, but apparently, I had forgotten that I chose some romance options early on. During the chapters following chapter nine (when I had actually made that choice), there was zero indication that I had actually made that choice. I understand that dialogue is expensive, but there should have been some indication that the short scene just before the Battle of Odessen was coming. I literally sat in my seat for a few moments questioning which dialogue choices I had made to spring this romantic scene.

While still on the subject of companions, I would have liked to see a bit more growth from a few more of my companions. We saw some amazing character changes in Koth, Senya, and even Tora, but two of the most important companions that you have also had no character arc: Lana and Theron. I would even go so far as to say that your character, despite any choices that you make, grew and changed on an emotional level. However, Lana and Theron were pretty much the same characters at the end of the expansion as they were at the beginning. It would have been nice to see Theron harden and become more Imperial-like if you were a Sith making dark-side decisions or Lana soften if you were making light-side decisions. I understand the limitations, but sometimes it’s the little extras that really end up paying off.

The mechanical issues that I had with chapter 16 are pretty much the same issues that I’ve had with KOTFE since the launch of the expansion: The encounters leading up to the final boss fight feel like forced padding to make the chapter seem longer than it should.

As I said, the last boss fight was great, but the bosses leading up to that event were boring. I should make this clear: There were unique mechanics to each of the bosses. It’s possible that these mechanics could have been impressive, but they had little to no effect on me. I will spoil one fight with a skytrooper boss to illustrate what I’m talking about (it’s not essential to the story, so it shouldn’t impact your enjoyment): During the fight, the boss drops a giant cross-shaped AoE, similar to the boss at the end of the Battle of Rishi fight. But I was able to completely ignore it. Just to test it out, I stood in the middle of each of the AoEs this boss and the others dropped, and my health never dropped below 40%. In fact, the only reason I died during the chapter at all was due to a glitch when opening one of the weapons cabinets.

If you’re interested in story and you’re not afraid of an empty feeling by the end, then you should definitely hop into chapter 16. If you enjoy interesting character arcs in video games, then you might want to play dark side. However, if you’re hoping for the story of a farm boy growing up to destroy a moon-sized space station, you might be more than disappointed.

If you’ve played through the story yourself, let me know whether you did the dark-side or light-side ending and what you thought of the story over all. Were you satisfied? Do you like the television-season-type endings? Let me know in the comments below.