Blizzard isn’t being shy about touting Overwatch on its second birthday. Not one bit. And you know what birthdays call for in the games industry? That’s right: One big honking infographic loaded with huge numbers!

According to the studio, Overwatch has racked up 40 million players in its first two years. The game has grown substantially as well, with the addition of six heroes, 15 maps, four game modes, six seasonal events, and over 2,050 items.

With such a successful product under its belt, is Blizzard considering an Overwatch sequel? The studio was predictably cagey when Gamespot asked the question, saying, “At least for the time being, [supporting Overwatch] is our focus right now, and we’re excited to work on this game.” 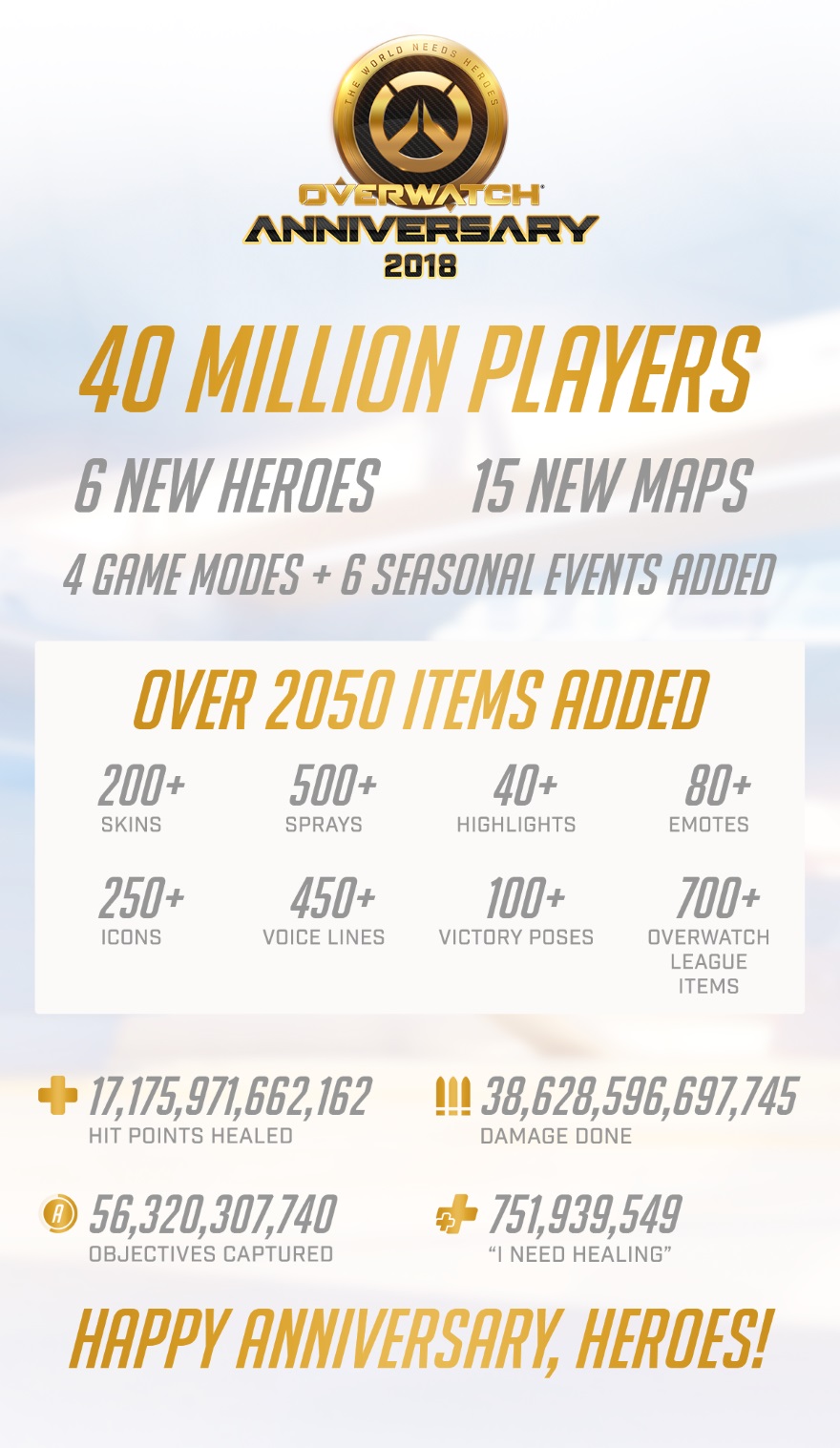 a stat saying how many people per month play it would be usefull. The amount of health healed… who cares!
Blizzard stopped being creative years ago. They just make expansions now. Thank god companies like Obsidian, Larian studios and CDProject Red still exist.
Blizzard and Bioware thank you for the memories.

They don’t need a sequel, for as long as they’re making money no point.

Team Fortress 2 has been making money all these years just fine without a TF3.

A sequel would only be competition for their current cash cow. If they wanted to capitalize on the IP, they could do a RTS or some other genre featuring the deep* lore of the original game.
*I have no idea what the lore is for OW. It just didn’t catch me nor did the FPS game. Give me something else and I might take a look.

Lol! Holy Shit! The game is still rather new. How the hell is a sequel even part of the question?

They shouldn’t do a sequel. What they should do is make a story-driven action-FPS PVE focused MMORPG set in the Overwatch universe as a spin-off game with the same combat mechanics as vanilla Overwatch.

Why does everyone think there is going to be an Overwatch 2? The only games that have sequels are the RTSs and you see how fast they pump those out.

It’s a weird clash of people who play ‘service’ games on PC and console gamers who expect sequels I think.

I agree its strange (especially when both games are up simultaneously) but it is a thing.

What they need is a battle royale mode, to get in on that BR money. If any game that can adapt its this.

“Sweet I found a D.VA mech in a crate drop”

I’m OK with them not wanting to commit to a sequel. Too many games, that try and pretend to be “live services” (Jim Sterling Voice), and then squat out a sequel to the ruin and detriment of their former players and previous game.

If you want to pretend you’re making a game that will provide lifelong value, you have to commit to the damned game. Good on OW for that much at least. (*cough* Destiny 2 sucks *cough*)

Why bother with a sequel this early if at all? Like maybe they could start releasing paid expansions or something if they really needed to but it seems like they’re doing fine.

I’m glad everyone else is as confused by this question as I am.