END_OF_DOCUMENT_TOKEN_TO_BE_REPLACED
From time to time, I like to break from talking about the latest news from Star Wars: The Old Republic to talk about what I enjoy most about the setting that BioWare provides: a roleplay platform.

Of course, I’ve talked about the good and the bad of the game as a roleplay platform on many occasions, so I’m not going to dive into that today. Let me say up front that it’s not a perfect platform for roleplay, but I love roleplay in MMORPGs. I also love Star Wars, and this is the platform we have right now. Hit me up in the comments if you’d like to continue that conversation.

This week, however, I’d like to take apart how I construct an event for whichever SWTOR RP guild I happen to be a part of now. For anyone that might have taken part in an event that I created, you would know that I usually handle them similarly to a tabletop RPG event. I like to use a dice system to determine certain outcomes. The type of dice system usually does not matter because ultimately it’s the story and character choices that make for a great event, not the dice system.

Before I dive into the three things that I try to put into all my events from small to large, I’d like to state that I believe that freeform, social, and all the other kinds of roleplay events, from light to heavy, are great. And by my talking about the way I handle my events, I am not attempting to diminish other kinds of events in any way. I like to encourage MMO roleplay in all its forms, as long as it’s not harmful to its participants. 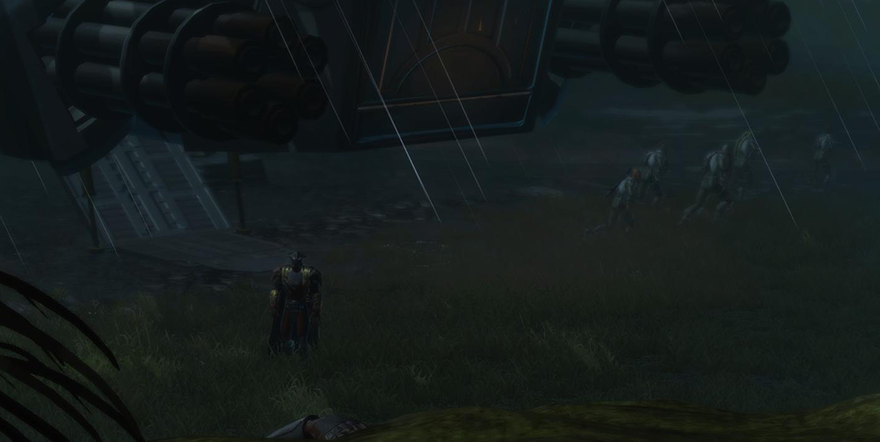 Bury it in lore

One of the greatest tools in the gamemaster’s arsenal is improvisation. I cannot emphasize enough how important it is to be able to think on your feet and bend with the direction of the group. I strongly believe that the GM is a guide to the story, and although the GM might have created much of what happens, the real stars of the event are the participants.

This might seem counterintuitive at first, but the best way to remain flexible when knee-deep in an event is to bury the event in lore and backstory. As long as the focus of the event is solid, I don’t think you can have too much lore created for an event.

In an event I created a few years back — when the Eternal Empire was a fairly new thing in SWTOR — I dropped a traitor into my guild, but I had to set him up as being legit, and I also had to create a catalytic event to give the traitor proper motivation. The traitor was a player character, who was more or less a good guy in the eyes of the guild. And many props to the player – he made a great traitor.

On top of the traitor’s backstory that was created by the player of the traitor, there was a whole backstory to the person blackmailing the traitor. We had tied him to Zakuul and some previous events in the guild. Of course, we developed his motivation and how it jibed with the guild’s overarching story and the story of Star Wars: The Old Republic at the time. The idea was that if anything was called into question, we would have an answer for it, but at the same time, we didn’t set everything in stone. So it could have been changed at a moment’s notice if we needed to for the sake of the event. 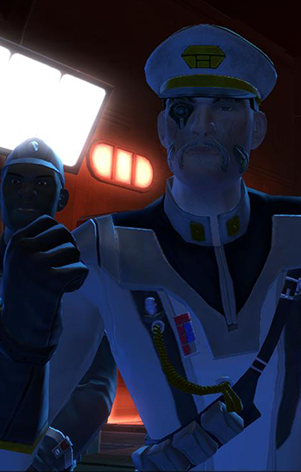 Let me continue with the traitor storyline: In it, there were many instances where players had to make choices. One such example was when it was discovered that a Moff was looking to undermine my Imperial guild’s activities. Unfortunately, the Moff’s information was buried in Imperial archives and cut off to even those with high-level security clearance. On top of that, we couldn’t tip off the Moff that we were searching for information on him. Obviously, we would have to gain access to the archives using less than legal methods. Therein lies the choice: Do we attack the facility with no concern over the Imperial lives lost or do we find a way to still protect our Imperial integrity? Do we go in guns blazing or do we use subterfuge?

During the course of the archive event, I also created subtle choices for individual players. For instance, the slicers (Star Wars version of hackers) had to choose whether they destroyed the information they found or just attempted to cover their tracks — one being more difficult than the other. The players playing lookouts had multiple occasions where they were forced to allow the slicing to continue or call it because it was getting too hot.

Ultimately, the idea for you as a GM is to keep options open. If the players want to go to the roof of a facility, even if there is no reason for them to do that, then go to the roof. And also don’t be too afraid of the group failing and allowing them to come up with a different plan or you coming up with another event. As long as it creates more roleplay and the players are still excited about it, then you’ve won as a GM. 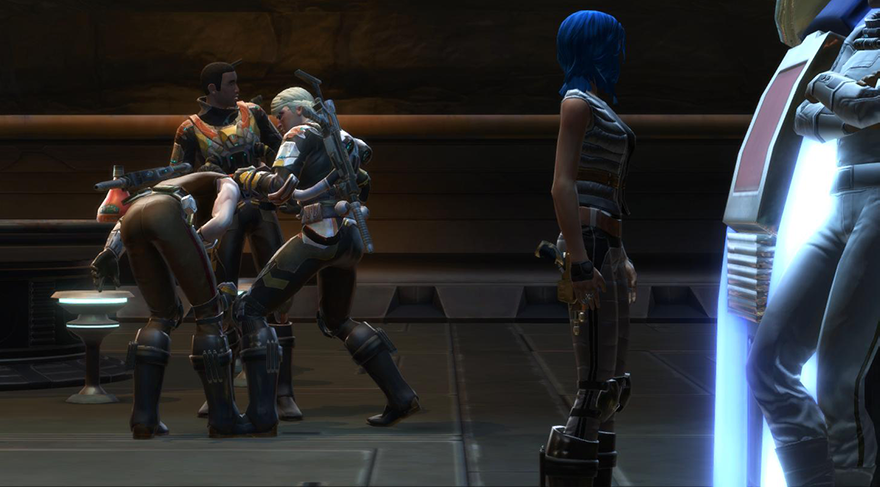 More than a DPS race

Let me tell you something that I really dislike in tabletop RPGs: DPS races. When the final fight comes down to doing more damage to the boss faster than it’s doing to you, then it is the most anti-climatic ending for me. I participated in an event recently that involved a lot of dice rolling and a lot of the boss hitting the group for high damage, but there was no way to mitigate that damage except through dice rolls. Even when another player decided to think outside the box and attempt to destroy the source of the boss’ power, it was thwarted by the GM.

This is why I attempt to make my final bosses puzzles. Sometimes they are literally puzzles. During the aforementioned traitor storyline, one of the groups had to create power spikes that would create a security lockdown on the archive facility. This would essentially trap the slicers in the archive room so that they were able to extract information from the facility while distracting the security guards with a seemingly more important crisis. In order to maintain the power fluctuations, the team had to invert the power frequency to create a signal loop. In order to do that, I created a puzzle with an increasingly more difficult series of numbers, and the group would have to decide what the next number was in order to keep the power fluctuating.

I’ve given my advice, but I know that it’s not perfect or complete. Have you ever attempted to run a roleplay event in an MMORPG? What would be a key of advice you’d give a GM that might know the basics, but is looking to make a good event a great event? Give me your advice in the comments below.

Every other week, Larry Everett jumps into his T-16 back home, rides through the hypergates of BioWare‘s Star Wars: The Old Republic, and posts his adventures in the Hyperspace Beacon. Drop him a holocom on Twitter @Shaddoe or send him a transmission at larry@massivelyop.com. Now strap yourself in, kid — we gotta make the jump to hyperspace!
newest oldest most liked

I find a lot of value in your articles on RP “mechanics.”

I started playing SWTOR around the time RotHC was released. This is my first MMO and my first involvement in RP.

Your articles are very helpful in teaching me how to engage in beginner and intermediate level RP.

I recently launched an RP story arc called Bleak Hunt on the Star Forge server. I plan for the arc to include events, but also advance with som short story writing.

I’d love to see an article from you on RP story arc development and management.

This is a wonderful blog you have here and I encourage other RPers to watch for new material from you.

The story was the only worthwhile feature in this game imo. Even though it’s my most disappointing mmo ever, I’ve returned twice post launch to play each expansion’s main story at least once. It’s very much rp-centric and I wouldn’t be surprised if that’s the community keeping the lights on these past few years.

Hmm mysteriously my missing comment reappeared, you guys having glitches with the comments again?

I’ve routinely had odd behavior where comments I’ve posted disappear when I log out and come back to the page, only to reappear a short while later.

When’s the last time this game received any story updates?

I wouldn’t mind taking a deep dive into this game but they seemed to give up on their regular episode updates awhile ago?

They’ve definitely slowed down, but with 8 unique class stories you can dive pretty deep before you hit bottom.

You should stream one of these, they sound interesting.

I’ve considered that, but it’s not very dynamic. And I’m afraid that people would end up getting very bored.

I RPed a lot on SWTOR. I ran a small event once for a couple of friends, nothing big, but I participated in some big stuff; an attack by force resistant things, dealing with the war just before the Zaks arrived, some inner Sith intrigue, Chiss Sith stuff (my main was a Chiss Darth so this gave me some neat RP opportunities as Chiss generally consider force affinity as an affliction, made for some great RP), and others.

It can really make the game feel more personal than the generic MMO stuff, but you have to avoid things calling yourself the Emperor’s Wrath when if all Sith Warriors did that I’d have 5 of them myself! Use the background of the game to build on but don’t copy it verbatim. I not only wrote a history of my Darth I tied in some of my alts and built a story that had some similarities to the actual in game story but was very different as well. You can easily use the class stories to set the stage but don’t simply plagiarize them.

If you’re the GM don’t be arbitrary in things but don’t let the players run over you either. I’ve seen bot ways and as either party don’t let resentment build without saying anything, it just festers and gets worse and can bring entire long term RP plans crashing down around you.