Defiance 2050 isn’t just launching and going away, oh no: Trion Worlds has a new producer letter up today detailing exactly how it’s planning to buff the new baby over the next couple of months. Producer Matt Pettit lays out the game’s roadmap, noting that the Demolitionist class will “soon” unlock for all players, followed by the addition of two new classes: The Crusader is up first, followed by the Engineer coming this winter.

Perhaps of more interest to players already happy with their toons is the three-part “Paradise” content rollout on the way. Trouble in Paradise launches alongside the Crusader with new baddies to beat up; then there’s Shadows Over Paradise’s new story missions, sieges, and new advancement system. In Paradise Lost, Trion’s planning to flesh out the endgame.

Worth noting is that Trion says it pulled in over a million players since launch. (Trove, by contrast, just hit 17 million.) 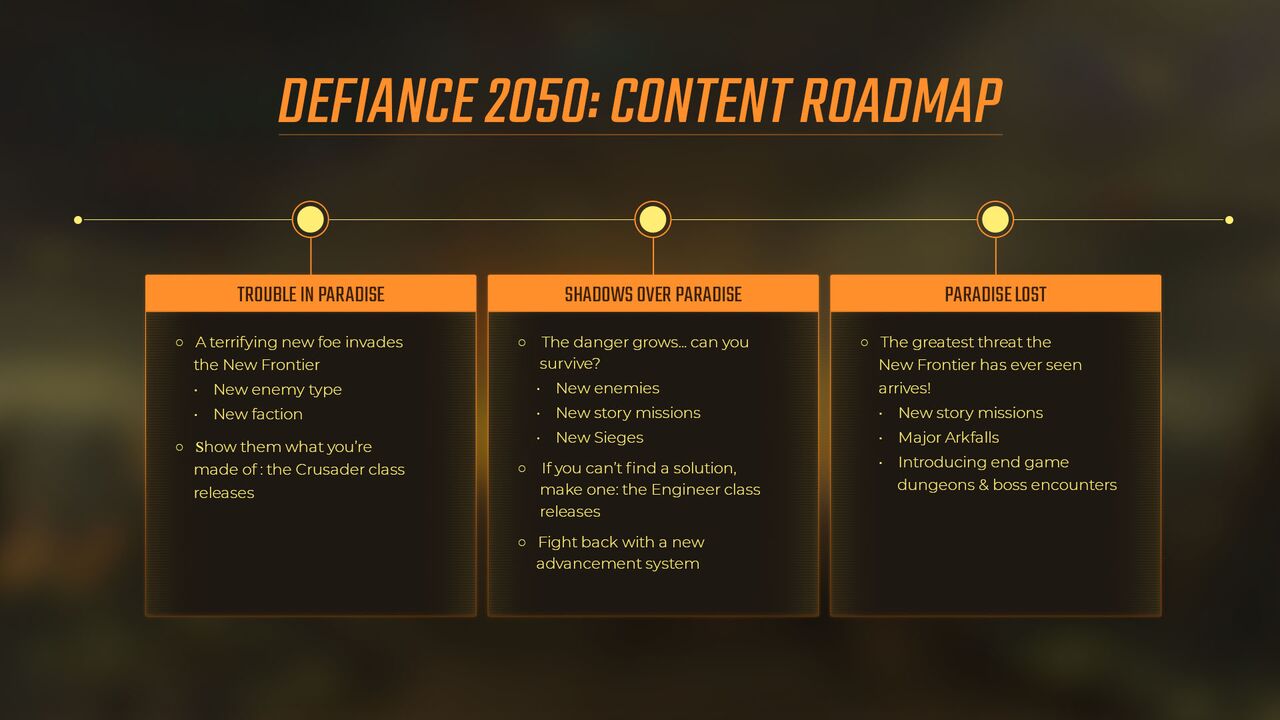 Don’t care what they add to the game until they can fix the lag that the original had. They brought it right along with this reboot. Can’t count how many times mobs just disappeared an then just reappeared right next to me, or how many times the game just crashed. I really do like the game, but just can’t keep playing something that has been an issue since the original beta.

I think the biggest reason I’m disliking Defiance 2050 is that they removed 50% of its character creator. It was difficult enough before to make a character that wasn’t the ugliest thing ever; now you don’t get the choice.

Yes lets use a number that just shows how many people have downloaded and maybe played like 5 mins, insted of the active players.

Even if only 10% of the players uses steam, that is still a low number. steamcharts shows about 1k players playing at max at anytime.

MassivelyOp itself published the other day that player interest in 2050 was declining to less than 1000 players on Steam (it’s around 720 right now). Then the next day we get this new optimistic post. What do we think it happened beween the two days?

Playing defiance on the PS4 like many other mmos before it has been an absolute blast. There’s been loads of activity with plenty of other players to play against.

I find everyone’s weird fixation with willing games to die really frustrating. The issue with defiance was the lack of variety in the quest structures but the game was always fun and with console controls it really finds a home.

I really hope that the game finds its audience and the paultry million players don’t have yet another game removed because of the ambivalence of non-players comparing it to more “successful”games. Remember, marvel heroes, city of heroes and Star Wars galaxies all fell foul of this attitude in their day and we now can’t play any of them.

Im surprised that Bree of all people is joining in on this, turning a piece about Trion’s future plans for the game into a hit piece about how it isn’t as popular as trove, a completely unrelated property as far as I can see

Glad you are having fun but please realise that not everyone is and therefore they are going to have a different viewpoint than you. I gave it a shot but server issue such as teleporting mobs and lags ruined the experience.

While I don’t wish the game to fail I am understandably frustrated with issues that existed in the original Defiance are still present in the “upgraded version” and still making things miserable for some folks.

People who are unhappy are FAR more likely to seek out the opportunity to comment and let their gripes be heard than people who like (fill in the blank) game, car, restaurant, movie… whatever you’re reading about. Never read too much into the gripe level.

Yes, there was horrible server lag when it launched. That’s almost gone now. Shows up every so often, but not very. Yes, the game has some of the same bugs as old Defiance. Given how slightly the game changed, that’s entirely understandable. Yes, rather than give you a free form grid to create character specs, they have restrictive classes you unlock through game play (or an add-on pack, which is what I did). But that’s not the big deal about Defiance 2050.

I think the big deal is that they’ve purged all the so-called “pay to win” from the Defiance store. Lockboxes with guaranteed legendary items? GONE. They’re trying very hard to follow the Path of Exile model. The problem is, Defiance 2050 isn’t nearly so complete and well-formed a game as POE. I’m astonished at the value of POE in its entirely free “I’ve not spent a dime” level. I can’t think of a another free to play title that even comes close.

Opinions everyone has one. Again glad you have found something you personally like but not everyone has that same experience :-)

I think my frustration is less that other people don’t like a thing I like but the aanouncements of impending doom for these games.

Giving numbers versus established games feeds this sentiment. Better to compare to other launch figures, I think.

It’s very quickly dying, as everybody knew it would: https://steamcharts.com/app/743090#1m

Now check the numbers on consoles.

How can one do that?

It is not possible unless the Sony, Microsoft, or Trion publishes the numbers which is highly unlikely. I was just pointing out that Steam was only one facet of the playerbase.

I don’t think they’ve patched a single bug since launch.

After two or three days, the locked containers and the game crashing pretty much convinced me to step out on Defiance 2050. Bet I’m not the only one of that million making the same decision.

World of Warcraft takes fans behind the scenes of the character...