When will the staff here stop talking about City of Heroes? Now that there’s actually something to talk about regarding it, probably never. Look, you all know that there was a big stretch of time when my reputation was literally built on being “the CoH guy,” including a time when my column about the game was actually far better-known than the one I wrote about some complete trainwreck of an MMO that Square-Enix had forced out.

Mr. Dylan was right, the times are indeed a-changing.

Of course, this new era of the game involves rogue servers and a far more democratic nature; in theory anyone can host one of these servers, and all you need is an extensive background in programming and the patience to wade through arcane server nonsense. But as we wait for things to assemble into a straighter line and as the community rallies around fixed points, I can already think of at least ten things I’d love to see in the game in the era of roguish servers.

Look, let’s be real, CoH players loved our powersets. Absolutely loved them. You could rope us in with new sets almost every time, and it’s telling that not only did we have a huge number of sets in the game by the time it closed, there are still a huge number of further sets I can think of. Where’s a proper telekinetic attack set? What about more telepathic sets? How about a rifle set, or melee-oriented force fields? Can we get some shrinking or growing powers in here? While we’re at it, we have lots of energy sets that could go into melee, and…

You get the idea. Powersets are the sort of things that you can almost never run out of inspiration for from comic books, and when that starts running dry, you can start drawing from other settings and even the existing game. It’s amazingly diverse, and I will always be happy to have more of them.

The Rogue Isles and Paragon City itself are fascinating from a design perspective because they all take place within a fairly narrow city or set of islands, yet they still manage to have a huge number of zones with a diverse feel. Give us more of that. Yes, even just within the city itself, there are the sorts of regions we haven’t yet seen, regions based more thoroughly on specific real-world cities. Or just send us to totally new regions.

Like, hey, the moon is there. Let’s go to the moon. Let’s do domed cities on the moon because who cares about realism? The world is on fire and we deserve joy; let’s explore the moon. 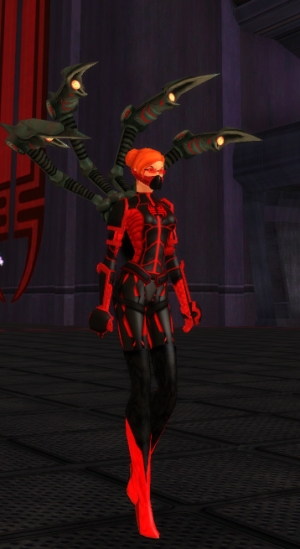 The rogue server builds have already started to play around with new archetypes (like the Sentinel), since at the fundamental level that’s more about having power set type A with power set type B and call it a day. But why stop with that? Why not give us the option to mix and match our powersets more than we already can? Why not let us, say, have half of one set and half of another, or access to two separate primary or secondary sets as we pick our powers? Give us cosmic events to change our primary sets! It’d be fun!

Yes, it would almost certainly be unbalanced, but that’s one of the fun ideas behind being rogue. No rules! No masters! It’s CoH; unbalanced can be balanced later as long as it’s fun now.

The greatest thing about CoH was the ad hoc and fun nature of its grouping content. The game didn’t care whom you teamed up with or why; it was built to work with a whole lot of different options. So let’s get more of that. Let’s have an even more enhanced queue system so that you can get thrown in with randos to take on more than just a handful of missions because the game lets you handle radio missions with a full team of control characters or defenders or tanks or whatever. Let’s make it easier to find supergroups and parties. In fact, on that note…

I really like Final Fantasy XIV’s world visit system and think it would be absolutely great in CoH. Period end. Heck, more server identity would be good even for that; give us tags for things like RP servers or PvP servers, let us visit our friends elsewhere, maybe even use a Cryptic-style tagging system to address name issues.

Instanced dungeons are fun. Radio missions kind of approach a notch of that, but I think it’d be fun to have more structured sort of run-and-gun events that feel like true dungeons melded with the ad hoc chaos of CoH. And as long as I’m already wishing for more LFG tools, this would fit right in.

Note that this one also does involve a fair number of changes to the game as it is currently structured and may require lots of tweaking to make it work within the game without damaging fun stuff like, well, radio missions. More than anything else, this sounds like it would be a fun addition only so long as it didn’t take away from what makes the existing game so darn fun.

This is something that honestly can wait for a bit. It shouldn’t wait forever, obviously, but it’s not something that needs to happen right away while the rogue teams get these servers running and stable and hope for confirmation that NCsoft isn’t going to suddenly torpedo their hard work. But once that’s done? Oh, I want new story arcs. I want new NPCs. I want more of the superhero milieu that this game had long established.

Mission Architect is great, don’t get me wrong, but it’d be nice to also have some “official” forward motion. And I’m willing to bet you could find at least a couple of well-known writers with a background in the game willing to write for a pittance, if anything, just to contribute to the universe. Hint, hint.

(Obviously I’m hinting about Mercedes Lackey. Whom did you think I meant?)

We’re already getting some of this (again, like the Sentinel). More of it would be good. So actually this one is less of a “I want to see this” and more of a “keep it up, guys,” but hey. Let’s get more epic archetypes, even if they’re just mirrors of what we have now. Longbow Agents!

Superbases were rather limited in their implementation. We all know that. But more of it is good, more housing is good, and in many ways CoH is like the idea game for housing because so much of it is based on personal player expression. Expanding housing options and locations (and separating it from guild ownership) will do nothing but endear this to people.

Seriously, as wrong-headed as it is to ever assume people don’t want to play The Sims in an MMO, it’s really baffling how hard CoH slept on this before it died. Of course I want true housing here. I want two or three bases for half of my characters along with an optional mobile base. It’s not difficult.

The Incarnate System didn’t exactly work. But that wasn’t the fault of the system so much as the content built around it, which was the “everything CoH wasn’t” that I wouldn’t want dungeons to introduce. Tone that content down and give us more of this style of progression, alternative advancement, new things to chase and to customize your characters.

Because let’s be honest, half of what makes people – including me – eager to get back to this game is that choice. It’s making things weird and unusual, building characters to take on legions of foes, and giving little to no care to the inherent weirdness or respective balance. So double down on that, and don’t stop.