Close set of voting this time ’round, at least in terms of TERA’s business model. For a time, the polls were literally at 50/50, but ultimately the ride as a free-to-player will be the way we experience this particular bit of MMORPG gaming. While I am a little bit sad I won’t be smoothing out the leveling curve a bit, I ultimately agree with the sentiment: What good is spending money outright on a game that has the free option, especially in the face of potentially abusive game store practices? So we’ll be seeing how far along we get without an inherent subscriber’s XP boost.

END_OF_DOCUMENT_TOKEN_TO_BE_REPLACED
Before we get to that, however, there’s the matter of finding a fun class to play. The Gunner ended up being way too simplistic of a choice, and so I balled up the idea and asked for something which I hope would bear a bit more complexity. You all chose the Valkyrie, and I’m delighted to report that this particular class is just what the doctor ordered in terms of gameplay interest. She is a lot of fun. 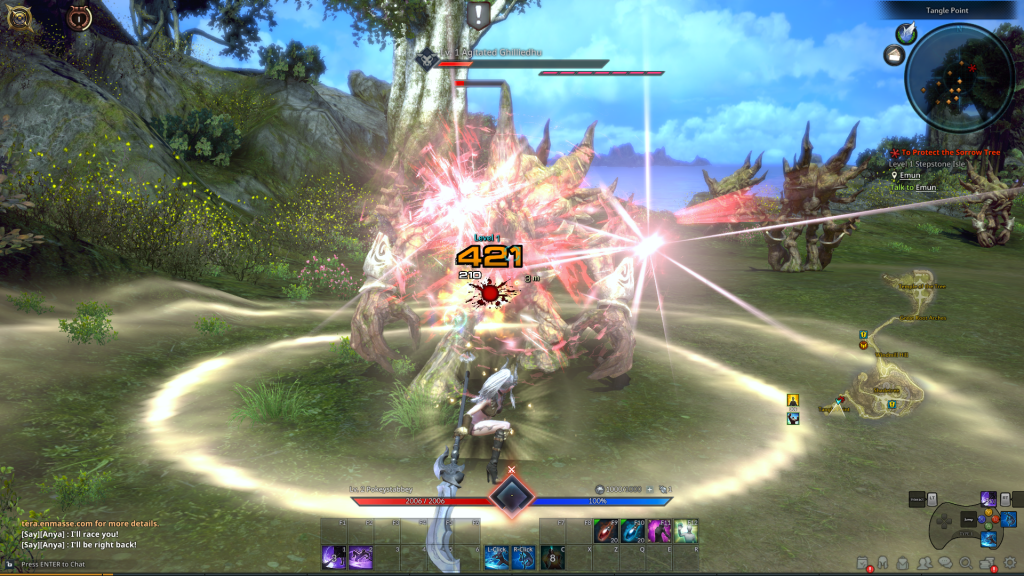 Everything about this particular class is about unrelenting offense, much like the Gunner. However, the added wrinkle of building up and spending Runes to unload an even bigger burst of DPS meant I had something to work towards and do instead of just smashing skills off-cooldown. At this stage, the Valkyrie’s combo game is pretty simple, with a few skills that tie with one another. At least a couple of them extend the use of one particular button, meaning that this class seems to just want to stab things as hard as possible. I can dig it.

Of course, all of that build up is no fun if the thing you’re working towards underwhelms. Happily, the full-bore explosion of detonating all of my Runes on a single target is the best sort of payoff. When you’re on a mob murdering spree and you turn to a fresh target and apply all of your Runes on it, then hit the button and watch their health bar slough off in huge chunks? It is a sight to behold and so far does not get tired.

On top of all of this offense, there’s the fact that the Valkyrie wears light armor, which kind of makes her a melee glass cannon. This kind of brought to mind the twin daggers spec of the Mage in Guild Wars 2 in that it was all about burning things down as fast and as hard as possible before retaliation can happen. It’s an extremely cool thing to bear in mind while playing solo, even if the light armor designs in TERA leave a lot to be desired. Apparently, Castanic women must have a buttock exposed at all times, as is tradition. 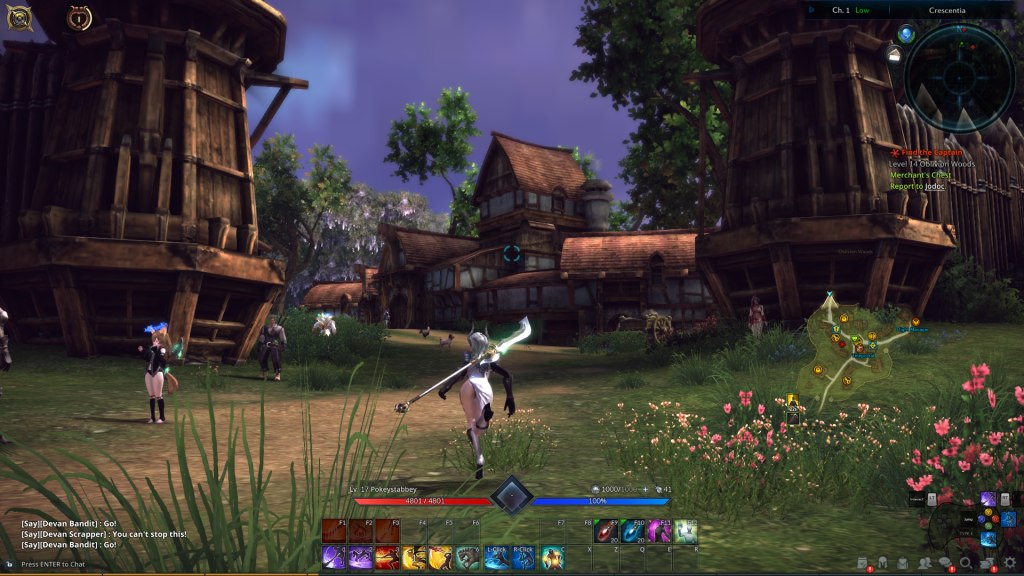 Impossible pants notwithstanding, the first half of the equation has been met; Valkyrie is a good time. But what about the free-to-play half? Well, at least so far, I’ve not run into any significant walls when it comes to XP gain. Questing seems to be extremely rewarding in terms of level gain, and at one point I even was able to farm enough random drops to put together a significantly potent weapon. Furthermore, I could use readily dropped reagents to power it up to impressive levels. Of course, getting all of those pieces is a trick of RNG, and I suspect that getting more pieces for similar drops takes longer, but it’s still a nice thing to go farming for, especially since it doesn’t appear to be restricted to free players.

Speaking of farming, there are some kill 10 rats-style mini quests that pop up frequently over the course of following the themepark bread crumbs. They’re a bit on the droll side as kill objectives often can be, but they appear to be pretty rewarding, and further pad the XP gain I already have with doing regular quests. It also seems to be endlessly repeatable, which is good if one is trying to whittle away the levels and time.

Which, again, is easy to do because hot damn is blowing up things with the Valkyrie a good time. 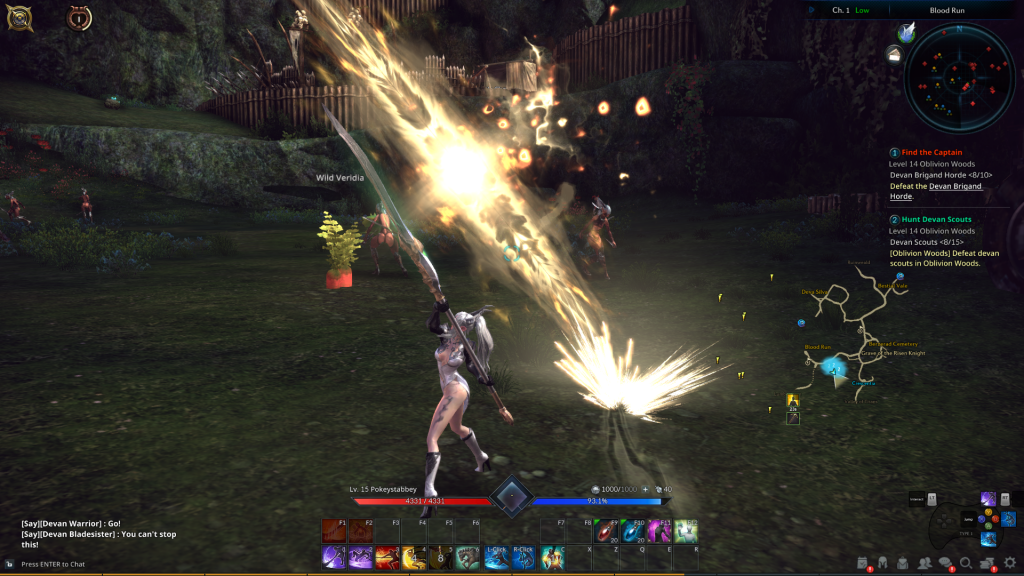 This all rather heads in to the next poll I have lined up. To be fair, I’m a little hard -pressed to come up with something to vote on, seeing as TERA is an on-rails experience. Still, consider this week’s poll to be a question to the experienced players as well as a roadmap for what I should work toward next.

As of right now, my content options are limited to burning through the quest steps and getting levels. That said, there are the aforementioned pop-up hunt quests that I can do, and that even have their own UI tab to guide me towards other hunts that are appropriate for my level range. That said, there are also a couple of queues that are in my immediate future, possibly; the usual dungeon queue and the PvP battleground queue.

I’m not quite at the right level for either of these queues yet, particularly the dungeon queue. I understand that the first dungeon is at level 20 and it would seem most of the PvP battlegrounds are for the higher level players, so that queue is very likely out of the question, unless there’s something I’m missing from my own excursions into the TERA wiki. So with that said, I can either focus on those quick quests, burn through the leveling quests to get to those dungeons ASAP, or even a mix of the two for expediency’s sake. Of course, there’s always the choice of just burning through the leveling content and ignoring all of this queue stuff.

Experts of TERA, I beseech you: Guide my hand!

What should I do to burn away the levels in TERA? 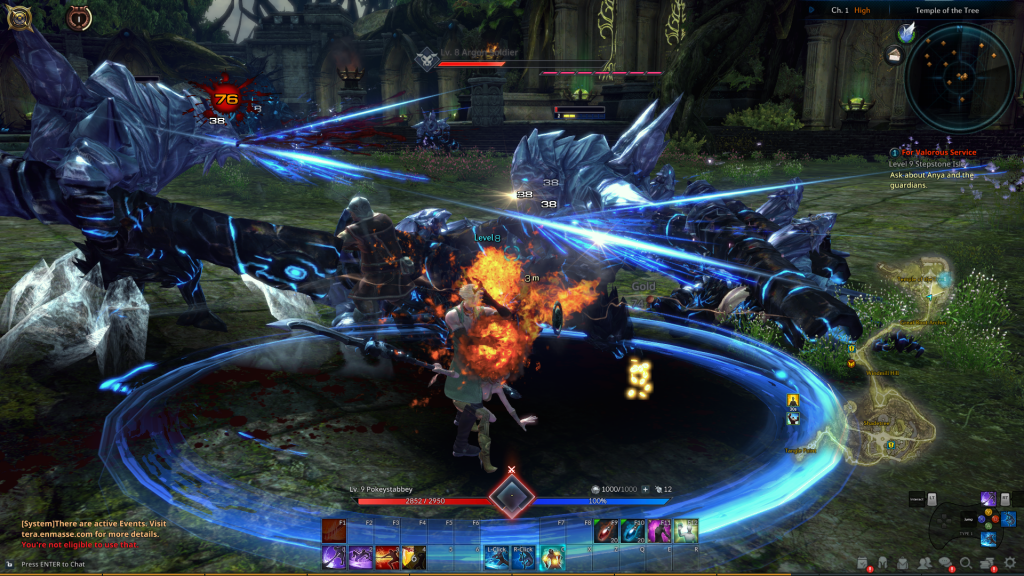 As usual, polling will wrap up at 1:00 p.m. EDT this coming Friday, June 21st. In the meantime, I think it would be to my benefit to try to whittle away the levels regardless. There’s only so many times I can as you fine folks how to spend my time in a themepark, after all. Also, I’m really taken with blowing up enemies with my Runes. Seriously.

Valkyrie is one of the easier “space bar” classes to play. Good gap closers, dodging/i-frame, self-healing, AoE. Non-crit class so shoot for Power increase on gear. Ridiculously fun/powerful at low levels and straight through to the Apex awakening quests. I would suggest sticking with playing through that quest chain so that you can unlock the class’ Apex skills just to experience the fun of the Godsfall skill.

Leveling to 65 is cake even without the XP buff from Elite or the XP boosts from the cash shop due to how streamlined Bluehole made it. The buff usually allows you to ding the next level where you automatically get the next higher level quest where you don’t need to toil around doing an extra Vanguard or two to level up.

Also, a recent change was made where lower level story dungeons have a solo mode to complete the quest chain since queues (even if they are cross server) for those low level dungeons are usually non-existent. Party size for those lower level dungeons were also changed to 3 players with the restrictions removed (for requiring tank, healer, dps in a group). Higher level dungeons still maintain the older setup. The leveling goes by in a clip until around the 40’s where running the party mode dungeons will help (XP from that plus the Vanguard Request for that dungeon).

Dunno if they fixed the avatar weapon issue once you hit the 60’s; before the level 70 update, relics would drop as needed from mobs through the 60-65 quest chains where you could easily complete your level 64 avatar weapon by the time you hit 64. After the level 70 patch, lot of players found that they weren’t getting those relic pieces by the time they hit 64 and were stuck with a level 58-60 avatar weapon which made some of the level 63-64 mobs a bit of a pain.

If you are into exploration, do some of the side quests. Some don’t give much XP or gold but plenty of them take you into the far corners of the map where some artist in the past toiled to make graphics that many players will never see given how the main quest chains never run through many of these places.

I’m not sure how much the game has changed since last I played, but it wasn’t thaaat long ago. The valkyrie is an absolute monster, and if you want to get good at it really fast, I suggest soloing the group dungeons. It might sound scary at first, but so long as they’re level appropriate, you bring potions and a positive mindset, they are absolutely 100% soloable. It’s actually the most fun way to level if you burn out on “kill x monsters” quests, and very rewarding in terms of XP/HR, keeping your gear up to date while rapidly increasing player skill and knowledge and making a bit of money by selling gear drops at the broker. Highly recommended for new players.

The “pop-up quests” (Vanguard Requests) is actually really good for leveling up. You miss out on some of the good rewards from the main story quests (side quests aren’t worth it) like inner armor, but they’re great XP and super convenient.

I haven’t done dungeons since they moved the leveling ones to 3 player only, but at least when they were 5 mans they were a load of fun. At least assuming you had a tank that could tank or a healer that could heal, because I’m way too bad to avoid damage. Given the queue times, mixing that up with the Vanguard Requests/main story quests is probably the best path forward.

Warning: I’m bad at the game so my advise is far from “informed” : P

WRUP: Eliot’s power is still kaput, so behold, I am Eliot...