I have a vivid memory from when I was younger – about 12 or so – of walking through the local Walmart with my mom to get this game that I had heard about that I just had to have. I couldn’t tell you exactly how I had heard of it, but I remember being convinced well before I actually got the game that I was going to love it.

Surprisingly, I was right. I remember beaming as I walked out of the store with my copy of Pokemon Blue to play on my new Game Boy Pocket. Despite getting Pokemon Blue, I went with Charmander as my starter pokemon (waaaaay before Charizard was cool). And it amazes that 24 years later, I can still remember the very first pokemon I ever battled with and am still enamored of this weird little franchise called Pokémon. I have played every single generation since then. I think I still have copies of at least one game from every generation. I am a softcore Pokefreak — a badge I wear with pride.

I say all of this to set up just how much I love this franchise so that when I talk about actually playing the newest Pokemon Shield in this edition of MOP’s MMO Burnout column, you know where I am coming from.

The newest core installment of Pokemon Shield leaves the Game Boy family of systems for the first time in its 24-year history and makes the monumental leap to… the 3DS’ successor if we don’t put too fine a point on it. (Technically, Let’s Go Eevee/Pikachu came out first, but they aren’t considered “core” games by those who decide these things.)

Regardless, Pokemon Sword and Shield being released on the Switch is a big deal. With better hardware, Gamefreak, the developer behind the Pokemon franchise, had the potential to really expand the scope of the Pokemon universe. And it kinda did, in the same way a drop of water expands a swimming pool. I mean, technically, it made a change, but it wasn’t enough to really mean anything in the grand scheme. That’s the theme I found throughout the game. I loved playing it, but overall it felt too safe. 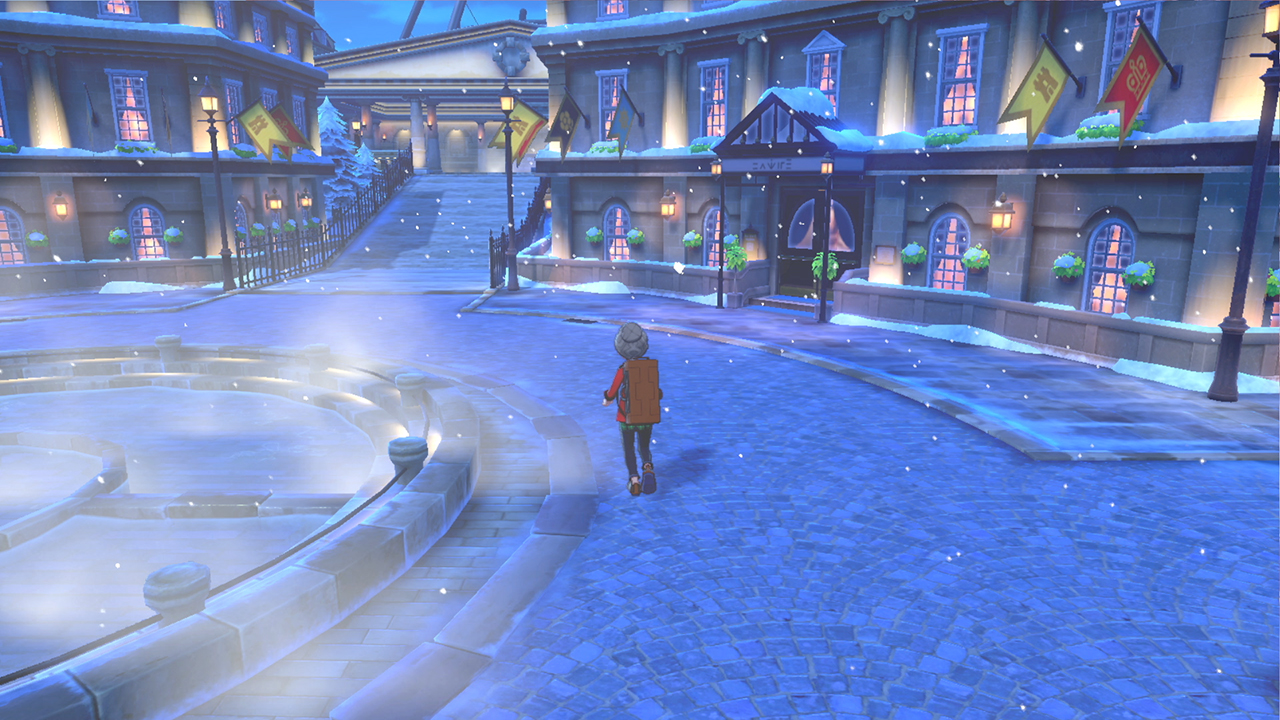 You start out in a scene that we’ve seen play out in every single Pokemon game. You are an ambiguously aged child setting off an amazing journey with your Pokemon pal, supported by a professor who apparently employs child labor by sending kids into dangerous battles in the name of Poke-science. Your mom is likewise there to send you off on a perilous journey with a couple bucks and firm handshake and not much else. As has become a weird staple in these games, the protagonist’s father is totally absent and only vaguely referenced. Paternity questions unanswered, you march off into the wilderness.

The world is pretty. From beautiful vistas to detailed dark forest paths, it’s a beautiful game. There’s one area in particular where you are traveling through a dark forest with brightly colored glowing mushrooms. The contrast between the so-dark-it’s-hard-to-see and the paste-colored mushroom is striking. It’s one of my favorite places in the game. My only regret is that I didn’t have control over the camera, so I was stuck as I wandered through looking wherever the camera wanted me to be looking. It was pretty, but limiting.

Most of your travels you don’t have control over the camera and the camera follows a locked, preset path. That means that all the scenes you see are gorgeous and painstakingly laid out, but also incredibly limited. That is, until you get to the Wild Area.

Why isn’t the whole game like the Wild Area?

The Wild Area is one of the best parts of the game. It’s an open-world zone  in the middle of a very on-rails, themepark experience. You wander around in any direction and catch pokemon, collect berries, run away from pokemon that are waaaaay too high level for you to catch. And you can swing the camera around to heart’s content. It’s a wonderful open-world experience that leaves me wondering why the rest of the game isn’t like this. It’s that good.

Its baffling why Gamefreak didn’t make more of the game like the Wild Area. Perhaps the studio was using this to test the waters of what an open-world Pokemon RPG could be like? I’m not sure what it was hoping to achieve because this is what I wanted the whole game to be like. But the majority is single-path on rails. No exploring, just following along with the story. The feeling of being so limited in most of the game is really compounded by how well done the Wild Area is.

Speaking of the story, for a game that is story-driven for progression, the story is merely meh. I didn’t find it very compelling and more contrived than anything. It had moments that I enjoyed, but overall it was very lackluster. That, unfortunately, is also par for the course for Pokemon games. The games’ stories are notorious trite and one-dimensional, so this isn’t really so much of a surprise as a disappointment that the company didn’t take the opportunity to create a more meaningful story. 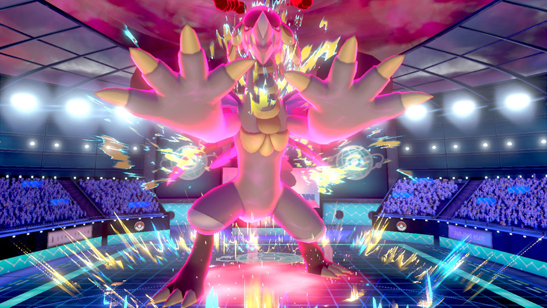 Who knew battling in front of a virtual crowd would be this much fun?

One change that I absolutely love is the new gym battles. When I was playing on my living room TV, walking into the stadium for the battle against the gym leader with the huge crowds chanting – that was an awesome experience. I found myself turning up the volume for every gym battle and smiling as the crowd reacted to the battle. The experience there is just phenomenal.

The new gimmick for this installment in the series is Dynamaxing. In short, that’s where you can take certain pokemon and super-biggify them and make them grow slightly red for three turns in the battle. As you do so, your pokemon gets more health and stronger moves and generally just looks awesome as it towers over you.

Unfortunately you can perform this super-biggification ritual only in certain places, gym battles being one of them. The other is in raid-style battles in the Wild Area with you and three other people. So while it’s really cool and fun to do, it ultimately doesn’t feel that impactful because not every pokemon can do it, and you can do it very infrequently in the scope of the game. I think I understand what the studio was trying to achieve – making it more awesome through scarcity – but I really think it went too far. I enjoyed it but found myself not really caring about it for the bulk of gameplay. 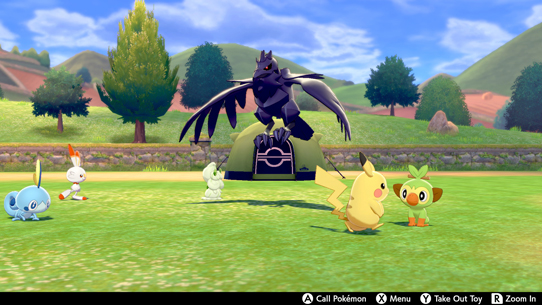 I didn’t realize curry was such a big deal

The final major feature for this installment is a new way to interact with your pokemon in your party: through camping. Wherever you are, you can set up camp and hang out and play with your pokemon to boost your mutual friendship (which in turn makes them battle better).

You can also cook curry for your party using berries and other ingredients you find the around the world. Different combinations of berries create different curries, and there’s a whole side game to fill your “curry-dex” through cooking, and there are 151 different possible combinations. The different curries do things like heal your party, cure status effects, grant experience, and make your pokemon like you more.

It’s a novel experience and honestly it’s one I enjoyed. It’s pretty fun to watch your pokemon scamper around camp and play fetch with a ball or bat a feather on a wand. It’s remarkably simple but still very satisfying from a gameplay perspective. 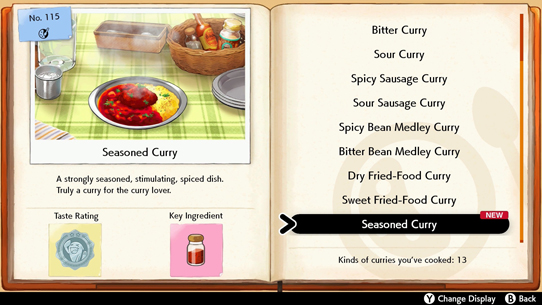 The game isn’t without controversy. Pokemon Sword and Shield broke from the rest of the series in one very dramatic way: It’s not possible to get the National Pokedex in the game. For the uninitiated, the national pokedex is every pokemon from every game. In previous generations, even if the pokemon weren’t catchable in the game, you could transfer them and play with them. Some people have pokemon that are probably old enough to order a beer in the US!

However, in Sword and Shield, Gamefreak limited the game to include only 400 total pokemon – a little under half the total available. This really upset some people (r/pokemon is still just a den of angst). But honestly, it didn’t impact me in the game at all. Perhaps I’m playing wrong, but I’ve never even come close to completing a National Pokedex, so the omission wasn’t a big deal for me. But for some people, it was enough for them to swear off the series.

All in all, Pokemon Sword and Shield are fun games and worth the investment. But they are somewhat disappointing in that Gamefreak clearly didn’t capitalize on the franchise’s potential to really make the games something special. I got the sense as I was playing that Gamefreak made safe choices all throughout – the tried and the true. It didn’t really take any risks and didn’t innovate the game or push the envelope in any meaningful way. Pokemon is what it always has been: a game about battling monsters. But that doesn’t mean there’s not room to grow, and it’s hard to shake the feeling that Gamefreak looked at all that potential and did fundamentally the exact same thing it’s been doing for the last 24 years.