It has almost become a running joke in MMO circles that pretty much every new studio and new title these days was founded by “ex-Blizzard employees.” Certainly, the class of World of Warcraft is rather extensive, and many developers have sought to take their experience and ambition elsewhere.

This is not a new phenomenon, even in the MMORPG genre. As far back at the 1990s, devs who cut their teeth on the first big MMO — Ultima Online — decided to strike out on their own and try their hand at a new project.

In September of 1998, several former Ultima Online devs banded together to create an independent studio in Austin, Texas, called Wombat Games. Rick Delashmit, Todd McKimmey, and Jason Spangler escaped the shadow of Origin and EA (for the time being, at least) and brought their experience to bear in an intriguing project. The goal was to make a wholly original online RPG.

“The company was founded on the basis of taking the MMORPG or online world concept further than Ultima Online, or subsequently EverQuest and Asheron’s Call, has been able or willing to explore,” the team said in an April 2000 interview.

The official announcement for Dark Zion emerged on May 8th, 2000, with the intention of bringing the title to PC, Mac and Linux: “Wombat Games, formed in 1998 by three former members of the Ultima Online team, announced its first game today, a massively multiplayer world RPG called Dark Zion. The game focuses on giving players more control over the persistent world, allowing them to create clans and governments, build cities, and wage wars.”

“We’re making Dark Zion because we believe that the MMORPG or online world genre has potential that first and second generation online games allude to, but haven’t yet fully explored,” the devs said in a 2000 interview. “We want to see a fully dynamic world with meaningful events that are crafted by players, not by developers.”

Since MMORPGs hadn’t solidified into anything approaching a standard template by 1998, the devs drew from their experience playing and working on graphical MUDs for this new title. Ambitious goals were set for Dark Zion, including a fully modifiable environment, unparalleled freedom, and a barter system that eschewed currency exchange. Players would set up governments with laws that would dictate how for example, PvP would work in the game (the devs admitted that this would be “chaos” at first, eventually leading to some sort of an emerging order).

Because this was a pure sandbox design, there were no planned quests or events — just tools for players to use. Oh, and you could “breed insects,” because that’s a totally normal thing to do. 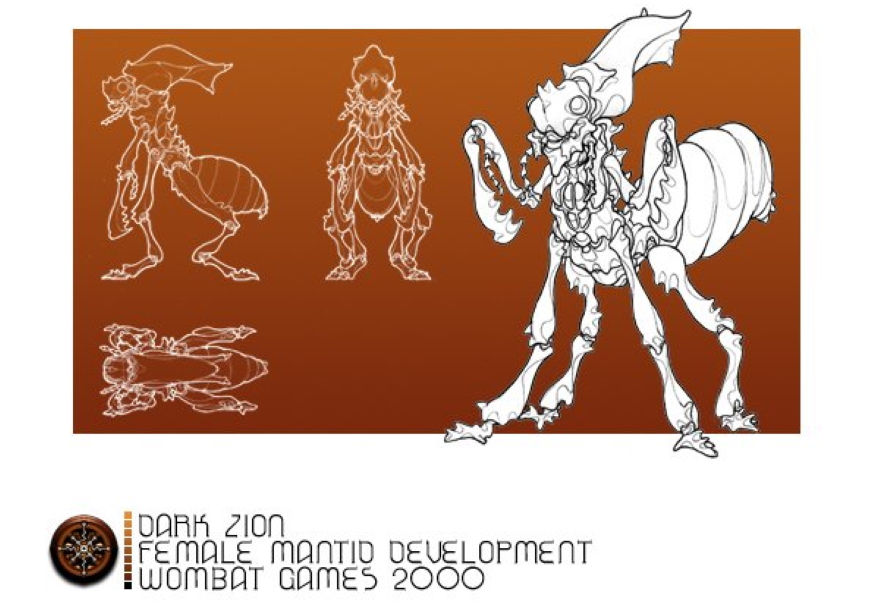 The team endeavored to build the 3-D engine for Dark Zion in-house that would allow for the scalability and flexibility for world transformation and up to 10,000 players per server.

The big hook for Dark Zion was the involvement of Tad Williams as a “creative consultant” for the MMO’s story and design. Williams is a best-selling fantasy and scifi author who wrote, among other things, the Otherland series (which itself got turned into an MMO). This allegedly made Dark Zion “the first persistent online world project to involve a major literary author.”

“We brainstormed the [Dark Zion] world and ideas together in a series of regular conferences. The concept is original to the game, and incorporated ideas from everyone involved,” Williams said in a fansite interview.

The setting was a mixture of post-apocalyptic, sci-fi, and fantasy, with Dark Zion taking place on a “hostile planet” where players would be challenged to build up a new civilization.

“The starting premise of Dark Zion is that the players, as descendants of a long-forgotten crew of intergalactic colonists, are awakened in the subterranean machinery of a desolate and nearly-inhospitable world. The resultant theme of Dark Zion becomes the players’ attempts to reclaim the surface, and in doing so, to learn how and why Zion became the hostile world that it is,” Wombat said.

Interestingly, the MMO would not allow for anonymity: “Systems are provided for players to keep track of the character community based on player-controlled criteria. Players have ‘last names’ tied to their accounts, and each player is allowed only one character per world, eliminating anonymity between players and characters. Together, these systems allow players and characters to be tracked by the community, and if necessary, held accountable for their actions by the community.”

During the work being put into the pre-production of Dark Zion, Wombat Games took up some other side projects to pay the bills. These included assisting with Origin’s Ultima Online: The Second Age expansion and developing the multiplayer component of Interplay’s Star Trek: Klingon Academy.

In November 1999, the team said that it was hoping to have a publisher demo for Dark Zion done by January 2000 to start shopping around. Hopes were high for a beta test in 2001, with a release from a half-year to a year afterward.

Unfortunately, as quickly as the winds of hype stirred up for Dark Zion, they died down. In August 2000, Wombat Games closed its doors. According to reports, the studio struggled to find funding and publisher interest for Dark Zion, leaving the project dead in the water and the developers scattered to find other work.