Back in 2018, a World of Warcraft player by the (in-game) name of Xirev made a splash when his Blood Elf Mage managed to, well, beat the game. That means earning all 3,314 achievements in the game, completely filling all of those bars, which also required filling a very large number of other bars along the way. It was a lot of work. It took him about 900 days of play time. It was significant. And now he’s done it again with Battle for Azeroth, clocking in a clear on all 3,927 achievements now.

Interestingly enough, this doesn’t quite mean he has everything in the game; at this point he has 484 of the 555 mounts available, which means that there are still things for him to pursue even after he has literally achieved everything the game chooses to track. But, you know, he’s earned a bit of a break until Shadowlands if he wants one. Also, the ultimate rejoinder to anyone asking him to link achievements. 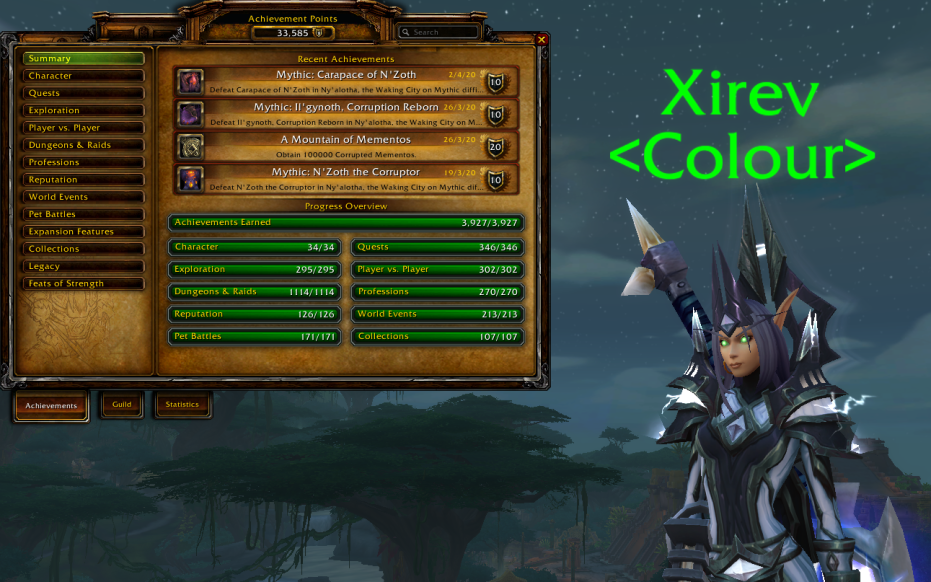 I enjoy doing achievements. I randomly pick one an do it when I just want to goof off. They are good for relaxing if I don’t take them to serious. The thing this is missing is all the help he would have to have gotten from a very good guild to get those achievements. I mean a ton of them require people the can interact as a group in sequence, not something that will happen in pugs to often. Overall though if it is something that made them happy to do then grats to them. Hope they get plenty more achievements to do in the next xpac.

So how’s that cure for COVID-19 coming along? Oh, yeah that’s right, he hasn’t spent his time doing anything actually meaningful.

Personally I would not bother doing something like that, but hey, different people enjoy different things. Some even enjoy pointless crafting and resource gathering in games like New World ;-)

You have played new world long enough to know that its pointless? yeah, thats what i thought. Game isnt even out yet and the beta hasnt even started. Do you comment just so you can go back and say “This is such a genius comment” well its not.

You have played new world long enough to know that its pointless?

Yea, I did. I still have access to it and to forums. And I can provide proof that I do. What’s the point of your comment? If you enjoy absolutely pointless crafting this game offers or grinding of dumb AI monsters (all of which you can kill just by rolling around and spamming your primary attack even if they are 20 levels above you) – you are free to do that, but not everyone else does, and people who do not like it are free to express their dislike.

Aside from his massive, throbbing ePeen…why?

I mean, everyone has different things that amuse them, so if that’s his deal I genuinely hope he got pleasure from the process (hitting the milestone would of course be a pleasure, I expect).

Certainly not for me. Just completing What a Long Strange Trip It’s Been taught me to hate seasonal events (that I’d mildly enjoyed before) and possibly drove my first divorce from WoW for a while.

I guess it must amuse him though I imagine some parts of it were certainly less fun than others…personally I haven’t 100%ed a game since the N64 days when games were limited by how many I could convince my parents to buy me ie not many lol. These days I’d rather just play something else once I’m done with the meat of a game.