RuneScape is one of those games that always seems to fly under my radar. It’s not intentional, and I don’t have anything especially against the game, but I’ve never played it and never had the strong urge to play it. Judging the ongoing financial success of RuneScape and Jagex, I’m in the minority here.

Of course, I’d heard about a video game being sold to a Chinese mining company back in 2016 and gave it all of the side-eye it deserved, along with pretty much everyone else. But it didn’t really stay long in my awareness.

That is, until the news that it had been sold. Just kidding, it wasn’t. Just kidding again, it really was. And now we’ve landed on the “make up your damn minds, maybe it’s not?” How, I wondered, could there so much uncertainty around who owns a company? Why are these things never clear?

Determined to answer my own question, I donned my mask, maintained my six feet of safe distance, and dived into the ether to answer see if I could answer the question: Who the heck really owns Jagex?

Narrator: He could not.

Jagex, I learned during the prepwork for this piece, turns out to be short for “Java Gaming Experts.” The more you know! Two brothers, Andrew Gower and Paul Gower, started Jagex software in 1999, with a generic mission of “producing top quality java-games for webpages.” In 1999, they started working on the game that would become RuneScape, and the game first launched in January 2001. Jagex software was reborn in its current incarnation in December 2001, with Constant Tedder as the CEO.

Things have continued on the upswing since then. Jagex was self-funded up until August 2005 when Insight Venture Partners, a New York venture capital and private equity firm, invested an undisclosed amount. Curiously, in my research I found that at least some portion of the investment from the “New York” firm actually came out of the Cayman Islands. I know it’s not an uncommon practice, but it’s still pretty shady when it’s all said and done. So take that for what it’s worth.

It gets a little interesting here because sometime between December 2010 and January of 2012, Insight Partners increased its stake in Jagex from 35% to 55%, giving it a controlling interest and effectively making a Jagex a US business. This is notable because Mark Gerhard, the CEO of Jagex at the time, said the deal actually went down in 2010, and they announced it in January 2011 and made filings in February of 2011. Looking at the Companies House listing for Jagex, I wasn’t able to actually find the announcement filing Gerhard is referring to. The post dates don’t match the actual filing dates, making it very difficult to find… well anything.

Also during this investment period, two other investors entered the scene. The first was Spectrum Equity, another US-based investment firm focusing on “the information Economy.” The final new investor was the Raine Group, which has a presence in the US and UK, among other regions.

Things were business as usual from that point until July 2016 when the Shanghai Hongtou Network Technology wholly acquired Jagex for somewhere around $300 million dollars (the exact amount wasn’t disclosed). This is where it gets really complicated. Shanghai Hongtou Network Technology, founded in 2016 (the same year it acquired Jagex), is part of Shandong Hongda Mining Company, but the relationship between the two companies isn’t clear.

In September 2016, another Chinese company called Zhongji Holding, also newly created in 2016, purchased 51% of Shanghai Hongtou, with the intent to purchase the remaining 49% over the next 12 months. Zhongji is part of a larger organization called Shanghai Zhongji Enterprise Group, which also owned Shandong Hongda Mining, which owned Shanghai Hongtou, which owned Jagex. So it looks like that Shanghai Jhongji Enterprise sold Jagex to… itself? I’m not wily to the workings of Chinese business, but it definitely smells of shenanigans, though of the presumably legal form as these subsidiaries shifted themselves around.

So at this point, the American investors were out of Jagex, while Jagex framed this overall as a move to break into the Chinese gaming market through these companies. But it doesn’t look like it ever panned out that way. While RuneScape isn’t banned in China (which is an approval of sorts, I suppose), it still doesn’t have any Chinese-specific servers.

Just for the chuckles, Shanghai Zhongji Enterprise Group renamed itself to Shanghai Fukong Interactive Entertainment Company. Shortly after (or possibly before, possibly even prompting the name change), Fukong started to run into financial problems, owing largely to the Chinese freeze on games approval and flagging communication sector that year.

That brings us to where we are today.

Looking back at the history of Fukong, I’d say it’s not really surprising that in January 2019 it announced it had sold Jagex. The surprising part was that Jagex immediately denied it. After that denial, everything went radio silent, and there was no public news about the sale, real or not, until April 2020, when Jagex admited it was acquired by Macarthur Fortune, a global assessment management company. Platinum Fortune is an investment arm of Macarthur Fortune, so the original claim from July that Jagex denied was in fact quite accurate.

Not wanting to be outdone for the most dysfunctional business transaction of the modern gaming era, a third company, China Minsheng Trust (CMT), waded into the melee. CMT claimed that Fukong has violated a freeze order as a result of a $100M loan it had previously provided to Fukong.

Then there’s the matter of the strongly worded statement posted on Macarthur Fortune’s website on May 1st; it claims it lawfully acquired Jagex in April 2020 and asserts that a Chinese court had already denied the debtors’ request for injunction, the debtor in question presumably being CMT. The statement also makes remarks about legal action against the “illegal activities” of anyone claiming the opposite is true or even reports on said claims, thereby appearing to threaten both CMT and journalists covering the situation. Classy. 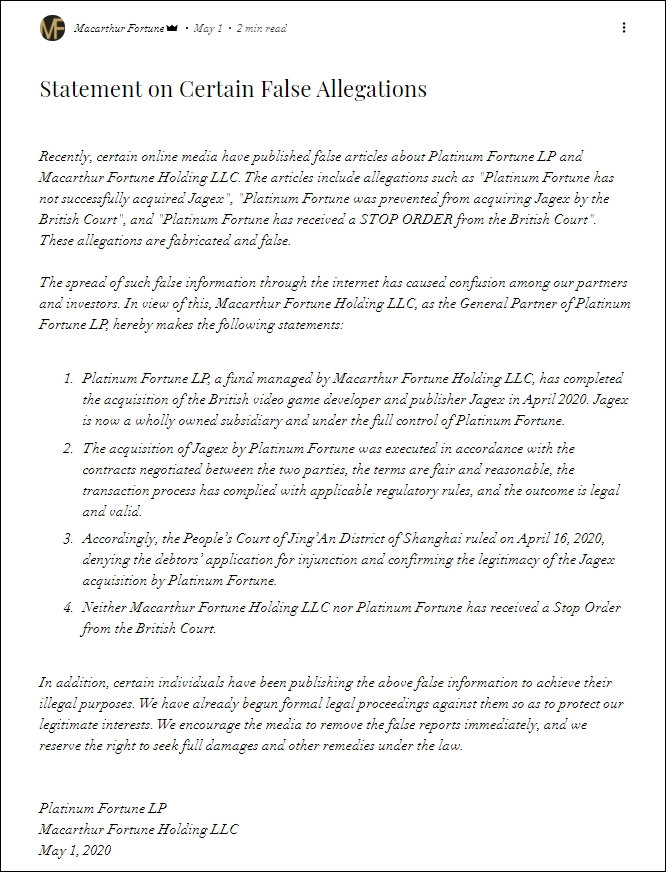 The really fun part of that statement? According to MMObomb’s reporting, Macarthur pulled that statement down later in May. So the company either put it back up later, or it wasn’t quite as retracted as whoever tried to delete it thinks it is. (Given the weird slug, we suspect the latter.)

So at this point, it’s unclear who owns Jagex. The lawsuit to stop the sale was filed only in June 2020 (a month ago as of this writing), so there hasn’t been much traction on it, and if past research is any indication, it could be months or years to sort it out. It seems as if both CMT and Macarthur at least believe they have documentation supporting their claims. The only piece that I can see as potentially having an impact is the Chinese court already denying the injunctions against the debtors, but I’m unable to independently verify that claim.

This is such a convoluted mess that I can’t even speculate where we are going to land with it. It certainly seems alarming that CMT would make a big deal out of the sale considering Jagex sold for a surprising large amount. I don’t see a scenario where CMT has a better chance of getting its money back from Fukong than through this sale.

Let me end with another fun bit of trivia: Jagex used the “Java Gaming Experts” tag until 2010, when it released its very first Flash game and decided Jagex now stood for “Just about the Gaming Experience.” One way or another, that’s certainly not true here.

Every other week, Andy McAdams braves the swarms of buzzwords and esoteric legalese of the genre to bring you Massively OP’s Lawful Neutral column, an in-depth analysis of the legal and business issues facing MMOs. Have a topic you want to see covered? Shoot him an email!