Two weeks ago, Lord of the Rings Online players were treated to “cascading” issues across the game servers that led to multiple days of downtime, lag, and the disabling of the chat system. Frustration from players, including those on our own staff, was palpable, more for Standing Stone Games’ communication lapses than for the actual technical difficulties.

Anyhow, the promised thank-you gift aka compensation for the trainwrecks has arrived as of this afternoon in the form of a code: THANKYOUGIFT. You’ll need to log into the game and the cash shop (redeem code tab) before August 31st and enter that promo code to collect your goodies: “Skill and Slayer Deed Boost x5, Enhanced XP Supply x5, +5000 Enhanced Reputation Supply, +2000 Virtue Acceleration Tome.” VIP players will apparently receive compensatory VIP time in the future too.

“We apologize for the recent downtime you have experienced as we worked to resolve issues outside of our control in the data center and other environments,” SSG says. “We will have more information about a VIP subscription extension in the near future. That information will be posted into this thread, in addition to this original post. We are working to finalize this information at this time. Again, we do apologize for the recent game downtime, and we are thankful to have you here.”

That apology ought to go a long way toward soothing the playerbase, though if you’re looking for a full explanation for all the outages or a return of the chat system, well, that isn’t here.

All our coverage of the mess:

• MMO Week in Review: ‘Well, I’m back,’ LOTRO said
• LOTRO Legendarium: What we have here is a failure to communicate
• Lord of the Rings Online returned to service last night, with fresh outages and lag
• LOTRO and DDO say they’re ‘making progress’ on the nine-day server crisis, but the community isn’t having it
• LOTRO has now been suffering downtime and tech issues for an entire week
• Lord of the Rings Online goes into its sixth day of server outages
• MMO Week in Review: One does not simply log into LOTRO
• LOTRO players postpone Weatherstock due to unstable servers
• Lord of the Rings Online’s servers struggle while Weatherstock returns
Source: Official site

“In the last week, as our players are aware, we have experienced ongoing outages due to environmental and infrastructure challenges. The cause was outside the scope of code and bugs, and solving these issues required (and requires) substantial restructuring of our server infrastructure. We have completed the first wave of those changes, and will continue to work on and hone these improvements in the coming weeks to make the experience better for our players. I wanted to personally apologize for these outages. As a gamer myself, I understand how frustrating it is. We are planning on giving our VIP players compensation for lost VIP time, and the teams have put together an in-game care package as an apology and to help players catch up on lost progress.” 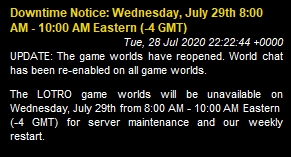