This is purely anecdotal, but it has been my experience that most people who play games with other people tend to spend most of their time in groups of just two or three players. Very often, people play with their significant others. Despite that, games designed specifically for couples aren’t something you see a lot of.

Enter Haven, a game built from the ground up to be played by romantic partners. Players take on the role of Yu and Kay, a couple who fled to an alien world to escape a dystopic society where “mates” are assigned by an indifferent Matchmaker, and in this case both were assigned to people they did not love.

Now, I don’t have a partner (foreveralone.jpg), but I still like the idea behind this game. Thankfully, Haven does allow solo play, with the AI taking over one partner while exploring and the player handling both in combat. Combat’s very simple (more on that in a few paragraphs), so that’s not as taxing as you’d expect.

Putting aside the couple-friendly gameplay, I also like the idea of a story that pushes an established couple front and center. It has been long-time pet peeve of mine — not just in gaming, but the media in general — that most romantic fiction focuses on infatuation and the start of relationships. We rarely give much attention to established couples, and when we do, it’s usually in the context of abuse, cheating, or some other dysfunction. Our media landscape is absolutely starving for more depictions of established, healthy couples.

So I genuinely appreciate everything that Haven is trying to do. This makes it especially sad that I have to say I like almost nothing about what it’s actually doing. 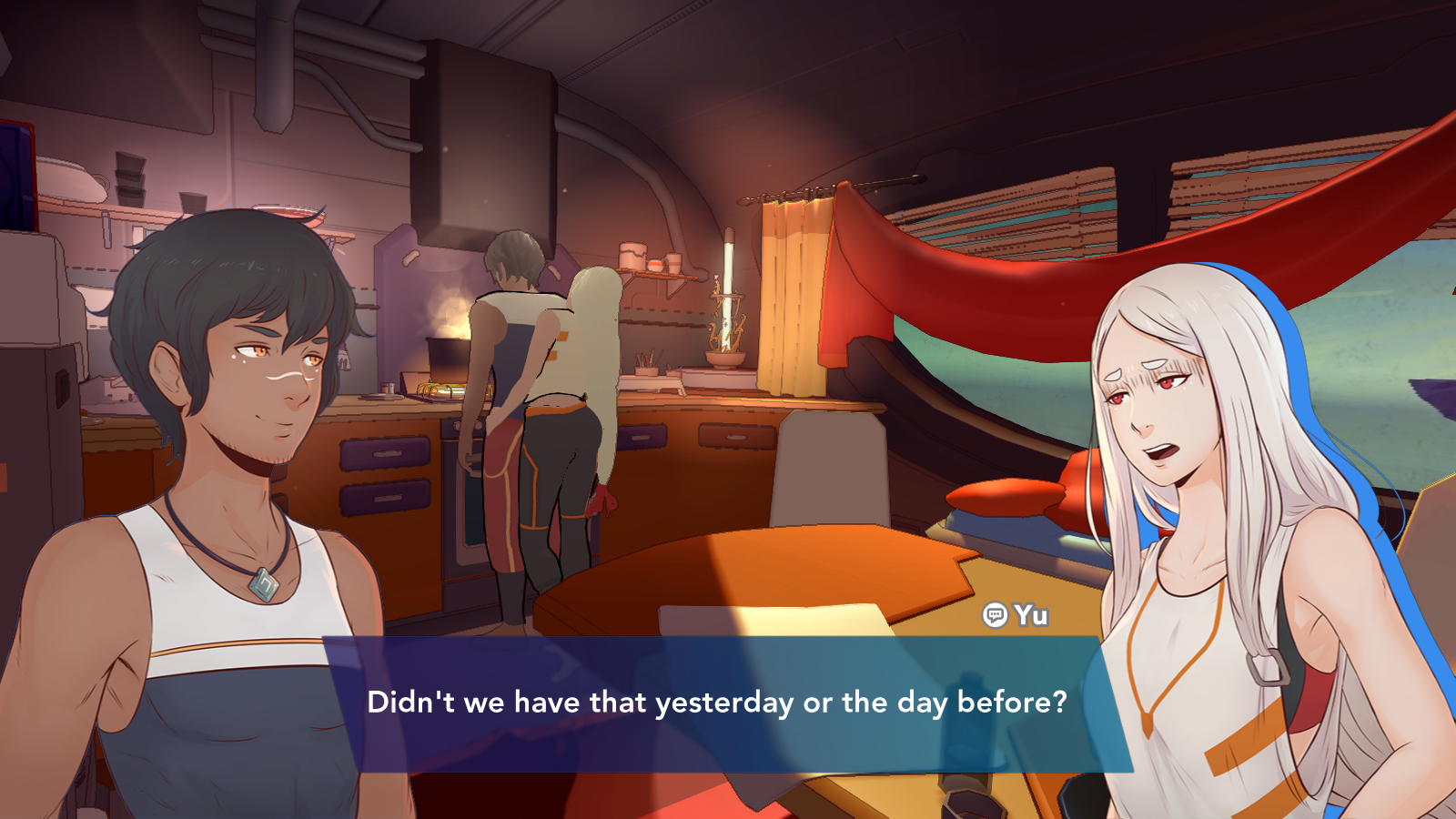 First of all I need to say that Haven is one of the few games I’ve ever tried that is actually, literally painful to play. You spend most of your time just exploring the world, so you’d hope movement would feel good in this game, but it really doesn’t.

Your main way to move around in Haven is by a sort of gliding hover. It looks really cool, but it doesn’t feel cool. Turning is a bit clumsy, but the worst thing is you need to keep holding down a key in addition to the movement keys to maintain the glide. Why it wasn’t made a toggle I’ll never understand. By the end of a long session, my finger hurt from constantly holding the key down.

Combat’s better, but not by much. At first I thought it was turn-based, but there doesn’t seem to be a discrete turn order, so I guess it’s just really slow? I’d have investigated further, but frankly by the time I finally got to any combat, my patience was already running thin.

I really want to be able to say that the story or the characters redeem the game, but that just isn’t the case.

Again, I think the idea of a game putting a loving couple front and center is great, but the execution is rough. Better than the gameplay, to be sure, but still not really up to snuff. 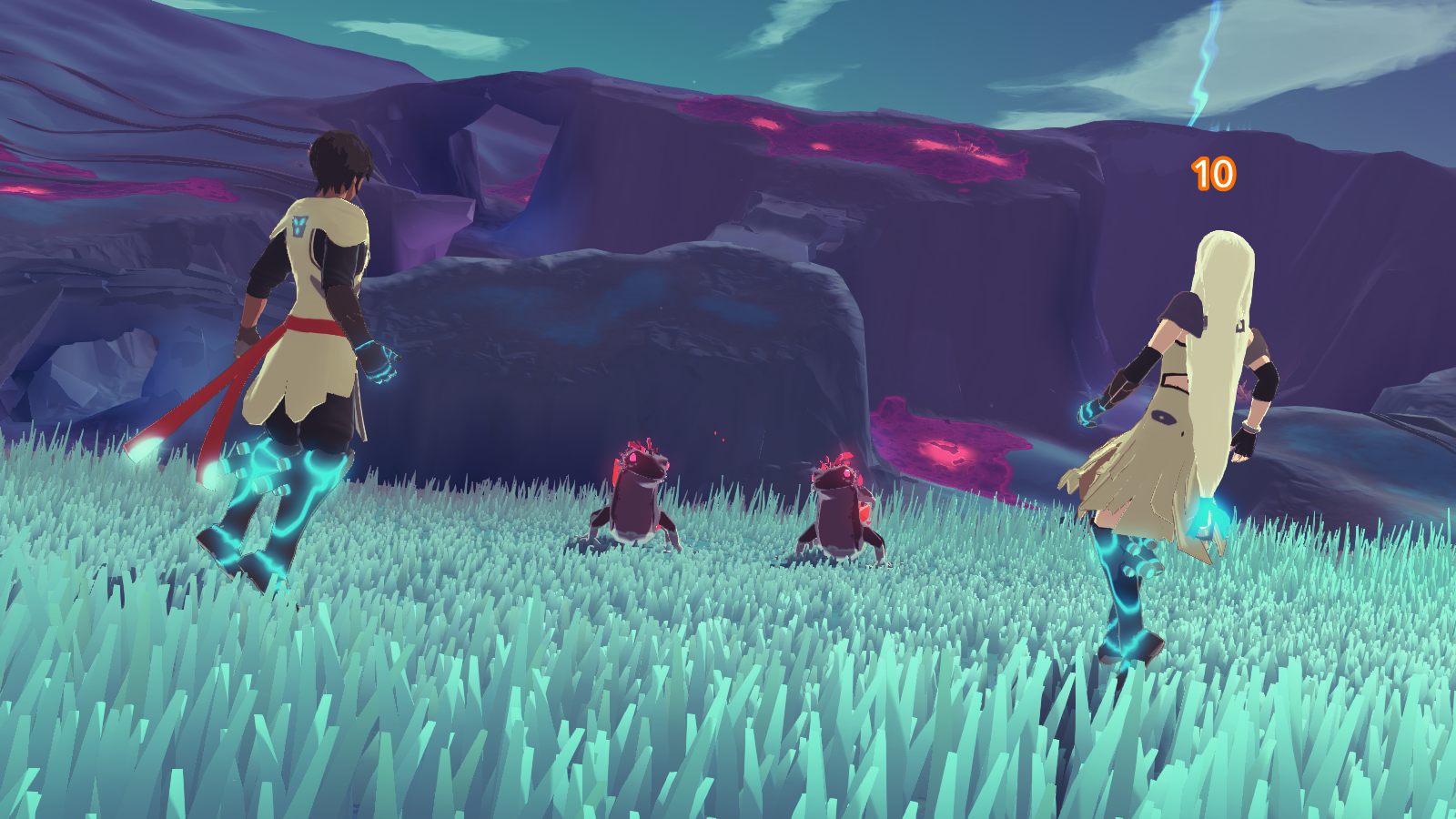 Haven seems to want to straddle the line between very cartoony, over the top characterizations and a realistic depiction of a romantic partnership, but it ends up doing neither particularly well.

There are a few moments when things come together in a good way. There’s an early scene when Kay comforts Yu after she wakes up from a nightmare, and it’s really tender and real, and exactly what we need more of in our media. But most of the time the dialogue is varying shades of cringe, ranging from awkward phrasing to moments when things take a sudden and bizarrely over the top turn towards the sexual.

A particular low point is a scene when Yu (jokingly?) seems to neither know nor care what kind of scientist Kay is. How long have these two actually been together?

At least the voice actors do a pretty good job, considering what they have to work with. They add a lot of personality to the characters.

The game maybe tries too hard to remind us they’re a couple, too. The characters spontaneously holding hands as they glide across the landscape is cute, but it gets old when any pause almost immediately leads into an idle animation where they kiss. It happens so often it feels more like compulsive behavior than genuine affection. 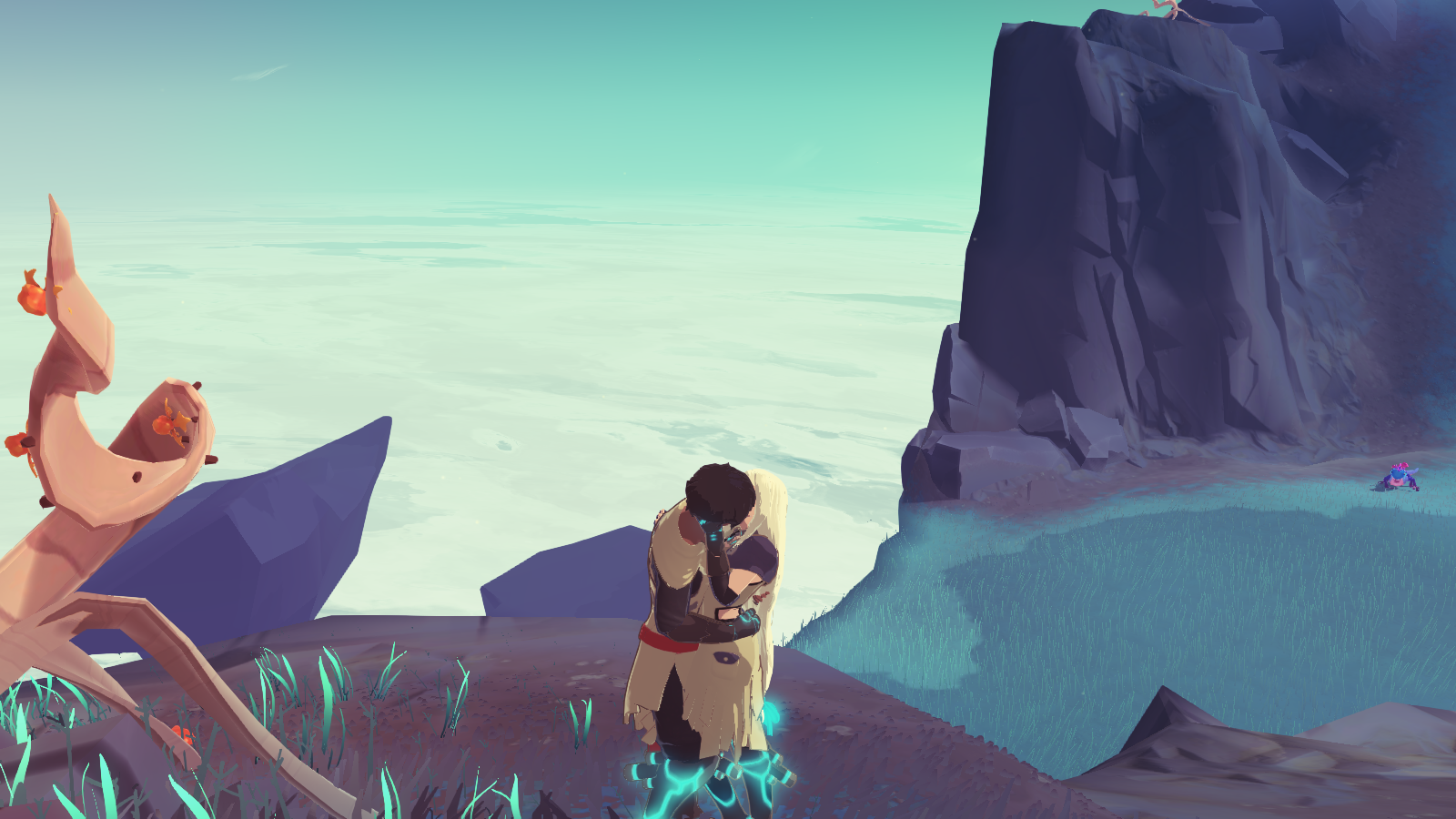 One other odd choice around this game is that Haven currently supports only local co-op. Given the focus on couples, who likely live together, I agree that prioritizing local co-op makes sense, but partners aren’t always in the same physical space as each other, so leaving out online co-op seems like a major oversight.

So is it all bad news? Well, no. One strong mark of Haven is its graphics. Similar to Drake Hollow, also recently covered in this column, Haven has a very bright and stylized art style that is incredibly soothing and inviting. The music is also kind of fun in an over the top sugar-sweet sort of way.

But beyond that, I really struggle to find things to appreciate about it, unfortunately.

I didn’t enjoy writing this column. Haven has a lot of great ideas, and clearly a lot of love went into it. It doesn’t feel good to spend so much time dunking on it, and it’s different enough that some people might still get some fun out of it. But it’s something I really have a hard time recommending to a wide audience.

I would really like to see other teams produce games on a similar line, though. Both in terms of gameplay made for couples and in terms of portraying loving, stable relationships in the media. Both are under-served niches.