It’s a distant memory now, but in 2008 I played a mobile MMO that completely and totally had me hooked. I remember sitting on the bus, on my way to class, phone in hand and eyes glued to the map. Click here and smash this deer there. Suddenly, my nemesis appeared, which in this game was a relatively rare occurrence. We clashed blades, but as was the way with a location based game, he was pulled away from me. But then something extremely unexpected happened!

It was a title from the first wave of MMOARGs, a game unlike anything I’d ever played before. It used your phone’s real-time geographic location and placed your avatar on top of Google Maps. It was called Parallel Kingdom, and it very much lived up to its name. It truly was a virtual world that lived on top of and in parallel to the real world. This might not sound like a big deal today, but at the time, my mind was blown. 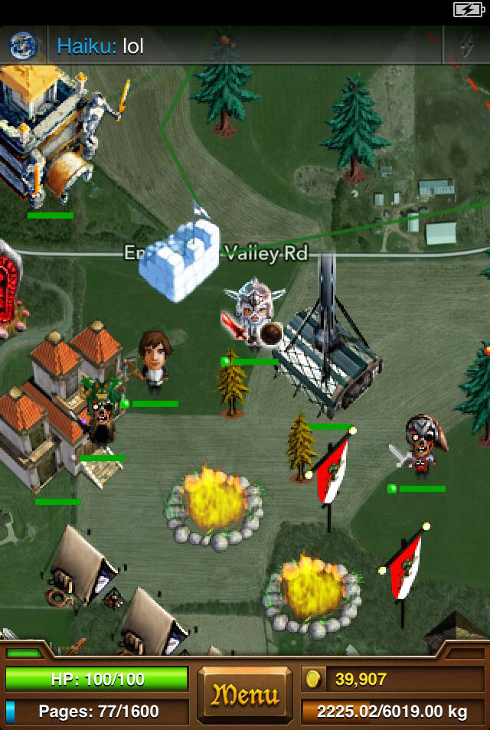 Let me put this back into perspective. The original iPhone only released the year before this game, and it wasn’t until mid 2008 that this type of smartphone even had externally developed apps! At least not in the way we think of apps now, with an app store that anyone can develop and build for. Believe it or not, we used to call these things… programs! This was the age of the smartphone wars: Are you an iPhone kid or an Android bot? Maybe you were even in the Blackberry or PalmOS camps, although those didn’t pan out so well. Every phone carrier had its own flagship device. It was like the wild west back then!

So this was a time when very honestly not everyone had a smartphone. Most of us were still flipping out our camera phones just being impressed that not only could we take photos but could listen to MP3s too. Fortunately for me, I knew an early adopter who always had the next big thing, so whenever that friend got an iPhone 3G, I got to buy the old iPhone for pennies on the dollar! And one of the first things I downloaded was a little MMO called Parallel Kingdom.

So bear with me some and let’s travel back in time a bit. I do want to note that the game today is long since dead – shut down in 2016 from what I can tell – so most of the info is coming from my memories of nearly 15 years ago, and the images are from whatever the final version of the game looked like, which is more sophisticated than what I played in 2008.

Gameplay features were simple but engaging

If I had to fit Parallel Kingdom into a box with similar games today, I’d likely toss in the Niantic games, namely Ingress, Pokémon Go, and Harry Potter: Wizard’s Unite. When Ingress first released, I played it religiously hoping I’d have an experience that even touched what I got from Parallel Kingdom, but it never quite lived up to it for me. Interacting with locations was great, but I needed more interactions with players! 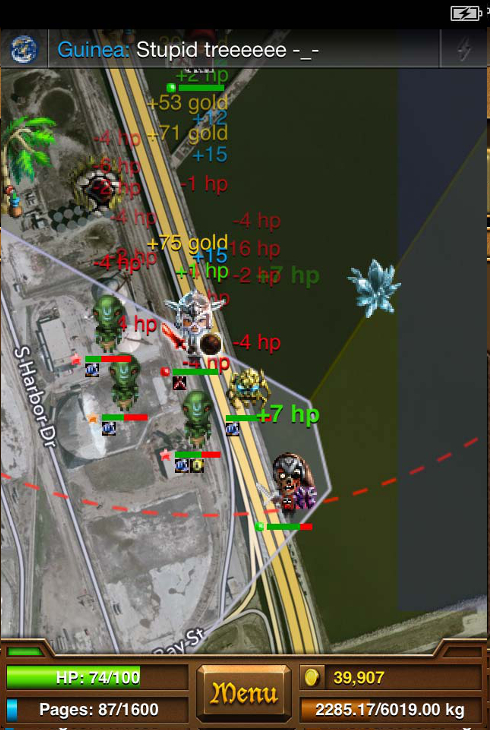 The premise of Parallel Kingdom was that you were a standard RPG character – I think there was only sword and board, but there may have been bows too – and the world map was actually just an overlay on top of Google Maps. So you simply played over a 2-D top-down view of the map. It didn’t try to hide that you were playing on top of Google Maps, either; you could actually see streets and building outlines.

It used your current location, and there wasn’t really any way around that. So if you really wanted to experience the game and make moves, you had to literally make some moves around town (sound familiar?).

You could click to fight random animals, or if there were other players nearby, you’d see them and could attack them for their loot too. I remember there being caves and similar spawns on the map sometimes too, but I don’t remember whether they were actual dungeons or just monster spawn locations that you could destroy.

You could also build a house and claim the territory around your house as your own. I think you received some extra gold or bonuses for having a large territory too. You also needed to sleep in your house. It probably healed you, but it may have also been able to protect you and your gear from other players when you weren’t online.

Combat and skills were light, but the highlight was in actual land ownership

Admittedly, the combat wasn’t exactly groundbreaking. There weren’t even combat animations. Your avatar literally would stand next to the enemy, and your damage would float over your heads. There were different levels of gear to equip, but I don’t recall whether it was only random drops or a light crafting system. The main reason I don’t remember much about this stuff is that none of it was the highlight of the game. Where the game really shined was in the home and territory control.

Since the game used the actual world as its world, only one person could own certain stretches of land at a time. While you had a house to claim your primary territory, you could extend your ownership by placing small flags that could extend it further. There was a period of time when I owned almost my entire campus! 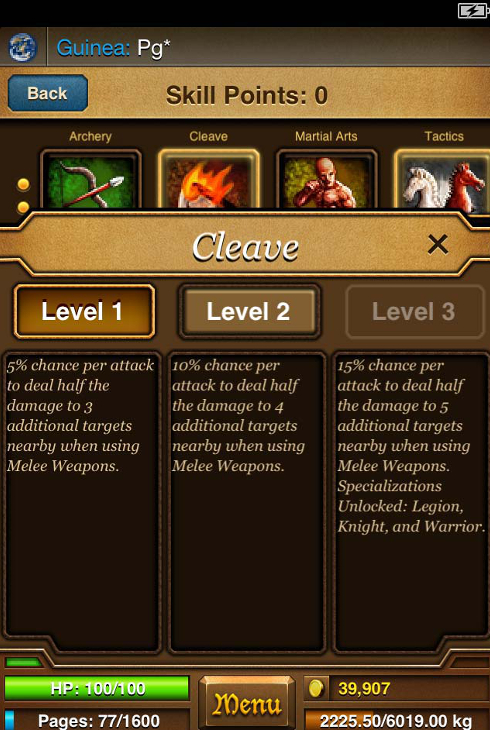 However, other players could destroy your claims and take it for themselves. And since the game was location-based, you had to physically be at a particular location to fight for and claim it. There might have also been some means of using your territory to fast travel… but I don’t really remember. But in general, actually seeing other players meant they were somewhere very close to you. I think the map would refresh every 30 seconds or a minute. So if you were driving somewhere, you might see another player for a few moments before he or she winked away.

Regardless, it was the back and forth battles over land ownership that really drove the gameplay. It was also this constant struggle over control that led me to have a nemesis. There was a particular player that constantly took down my territory and claimed it for him or herself; I reciprocated in kind. We never seemed to cross paths directly, but based on the territory we fought over, I figured we must both go to the same school and live somewhere near each other. I even logged in once to find my nemesis smashing down my house! The audacity!

The moment that defined mobile MMOs for me

So it was these gameplay features and the back and forth I had with one player that led me to the ultimate mobile experience I mentioned at the top. Even thinking about it now brings back evocative feelings of fear and loathing. 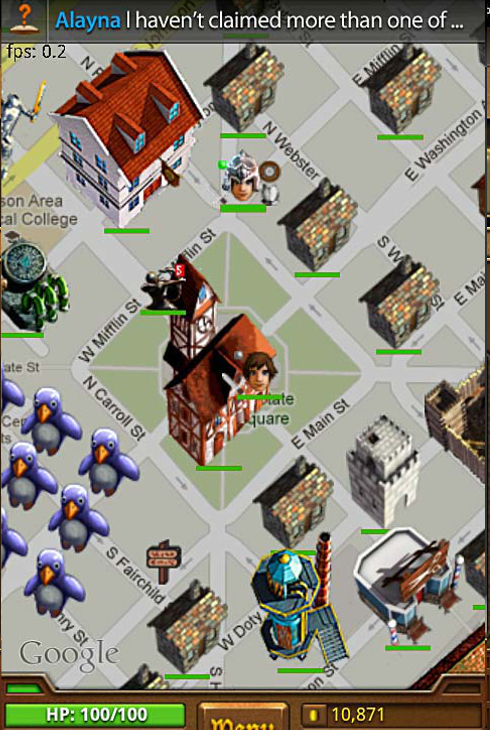 Here I am, on the bus traveling to class, playing my fancy MMO in a world of my own when I encounter said nemesis. The fire in my gut built up! This was it, I was going to show this person who really owned this town! The bus in the morning to class was moving at a good pace, so I knew I didn’t have much time. I laid into my nemesis as quick as I could, trying to take ’em out before we moved out of range of each other.

I know we exchanged blows. I thought victory was mine (it’s my memory after all) when the map refreshed and I breathed a sigh of relief. But then the unexpected happened: My enemy reappeared on my map! We fought again for a moment before the map refreshed again. And then – again the enemy appeared! And we fought. And then it dawned on me just like Neve Campbell in Scream: My nemesis must be on the bus! I looked around to see how many other people were staring at their phones, wondering which ones were smartphones. Who could it be?

Well, the bus arrived at campus and I went about my day. I wasn’t able to figure out exactly who it was, but I had a couple of hunches. You get used to seeing the same faces on the bus every day, but not knowing was part of the fun. Thirteen years later, I still think about this singular moment. Those 20 minutes of being dazed, realizing a random gamer online is suddenly a real person standing somewhere next to you.

It was a weird but wonderful gaming experience. I wonder if the other player ever thinks back and remembers that fight as well. The game was simple but impactful and left me with an experience it’s safe to say I’ll never forget. It was likely one that was a product of its time. Smartphones were new. Mobile MMOs were new. I was younger and had the lack of responsibilities and time to play a silly MMO nonstop. For me Parallel Kingdom was the peak mobile MMO experience.