One of the biggest MMO Kickstarters of all time and a long-awaited PvP game launched this past week… but you might not know it if you look around at what others are playing.

While some people are indeed playing and enjoying Crowfall, it’s not that many: Some players tallied up the server count and came up with a peak of 3,150 concurrent players during launch week, which was but a very small fraction of the overall registered playerbase (or the even nearly 17,000 players who backed the game).

When this tally was brought to ArtCraft’s attention on Twitter, the studio responded by saying, “We’re taking it slow and steady. Our eye is on quality of the experience we deliver as we drive growth.”

However, Creative Director J. Todd Coleman pushed back against this tally. “Registered emails can’t play (we’re not F2P),” he said on Twitter. “Peak concurrency is usually ~20% of active player base, which means >25% of our backers have already played during peak (more, if your include non-peak hours).”

If you’re still deciding whether or not to purchase and play Crowfall, check out our first impressions and livestream. Worth noting is that ArtCraft has continued spinning up Dregs campaigns as of last night. 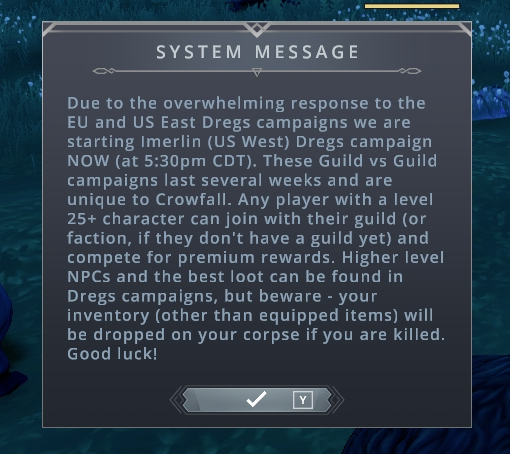