With Activision-Blizzard workers organizing, striking, fundraising, and working toward unionization and ATVI stock falling 40% following what has now been five months of scandal over the company’s culture of sexual harassment and discrimination, the company appears to be doing what everyone sadly expected: revving up its union-busting machine.

According to multiple current and now former Activision-Blizzard workers, ATVI executive Brian Bulatao issued a company-wide memo this morning that insists the company is working hard to address worker concerns and barely veils its attempt to frighten workers out of joining the fledgling union.

“[W]e ask only that you take time to consider the consequences of your signature on the binding legal document presented to you by [labor union Communications Workers of America],” Bulatao – or let’s be real, we have no idea who really wrote this since apparently Bobby Kotick has a habit of writing these things and assigning other people’s names to them – says. “Once you sign that document, you will have signed over to CWA the exclusive right ‘to represent [you] for the purposes of collective bargaining concerning all terms and conditions of employment.’ That means that your ability to negotiate all your own working conditions will be turned over to CWA, just as the document says.”

A Better ABK organizers are already calling out the move. “Today I am utterly disappointed at our executive leadership at Activision Blizzard, who has used their company wide email megaphone to attempt to poison the well with regards to unionization,” World of Warcraft Senior UI Engineer Valentine Powell tweeted. “They are attempting to use scare tactics and misinformation to convince people to distrust the process of collective bargaining.”

“It’s disappointing to see Activision Blizzard management, at yet another choice point when they could have done the right thing, double down and continue to take the low road. nstead of responding to their workers’ concerns, they’ve opted to blast the most tired anti-union talking points straight from the union busting script. Union avoidance campaigns waste resources that ABK management could otherwise be using to address serious concerns such as compensating the victims of sexual harassment. We hope management will come to its senses & see that their only viable path forward is to meet the righteous demands from the initial walkout, including ensuring there is a lasting worker voice in all company matters. In order to do that, management should commit itself to becoming and remaining neutral with regards to any employee organizing efforts. Finally we want to reiterate that Activision Blizzard employees’ have a right as workers to organize for a work environment free from abuse, and this right is protected by federal labor law.”

Organizers have been sounding the alarm about Activision-Blizzard’s union-busting efforts since the very beginning of the scandal arising from California’s lawsuit filed back in July. One of Activision-Blizzard’s first moves was to hire a supposed external law firm to help it navigate the crisis – a law firm well-known for its use of union-busting tactics. The company has since been accused of intimidating workers as well as shredding evidence relevant to that lawsuit. 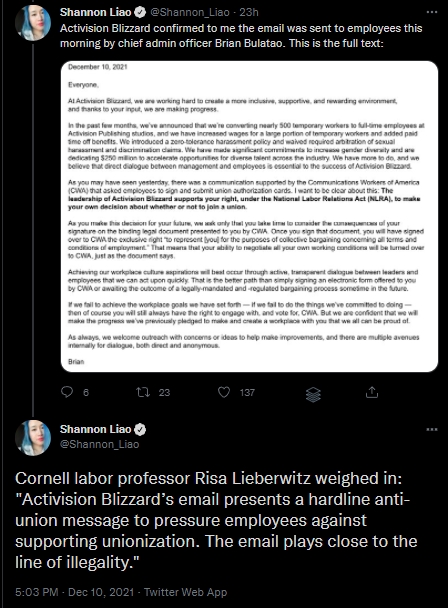 Here’s a good primer on how union-busting works.

Source: Twitter, CWA
Activision-Blizzard is considered a controversial company in the MMO and gaming space owing to a long string of scandals over the last few years, including the Blitzchung boycott, mass layoffs, labor disputes, and executive pay fiasco. In the summer of 2021, the company was sued by the state of California for fostering a work environment riddled with sexual harassment and discrimination, the disastrous corporate response to which has further compounded Blizzard’s ongoing pipeline issues and the widespread perception that its online games are in decline. As of fall 2021, multiple state and federal agencies are currently investigating the company, the industry has called for Bobby Kotick’s resignation following fresh reports on his misdeeds, and workers are pushing toward unionization.
Advertisement