Back in May, we got quite a bit of unexpected attention here at MassivelyOP as the headline for our coverage of Activision-Blizzard’s Q1 2021 financials – Blizzard has lost almost 29% of its overall active playerbase in three years – went viral across social media and Reddit. We, like many journalists and gamers, had been calling attention to the company’s falling userbase, dodgy metrics, and shabby pipeline for the last several years; we’d chronicled multiple incidents of mass layoffs, the Blitzchung boycott, dodgy stock deals, the exodus of veteran developers, multiple labor uprisings and compensation uproar, a gross attempt to bribe female employees to disclose their reproductive health, shuttered studios, the executive pay scandal, collapsing playerbases, shareholder vote shenanigans, and rejected diversity proposals. So the article was business as usual for us, but the moment signaled a realization and awakening for the broader industry.

Little did we know at the time that Activision-Blizzard was about to face an even bigger reckoning.

On July 20th, 2021, the California Department of Fair Employment and Housing filed a damning sexual discrimination and sexual harassment lawsuit against Activision-Blizzard following a two-year investigation. Over the last two weeks, the gaming industry was treated to a steady stream of leaked memos, gaslighting, press statements, denials, promises, and apologies from both current former Activision-Blizzard leaders, met by a justifiably furious assemblage of victims and employees calling out more and more abuses and lies. Acti-Blizz’s initial response was eyepopping denial and deflection. Gamers staged protests. J. Allen Brack and Mike Morhaime and Chris Metzen showed up with apologies in hand. Then came Fran Townsend’s combative memo, which provoked employees to condemn the corporate response and stage a mass-walkout last Wednesday. Sponsors began abandoning the company’s esports leagues. Journalists exposed just how far-reaching the scandal was. Developers called for unionization. And gamers have been wrestling with whether or not to continue participating in Blizzard’s games.

Activision-Blizzard CEO Bobby Kotick waited an entire week for a public address that failed to meet any of the employees’ demands; instead, it promised to terminate offending managers and contracted a law firm known for union-busting and helping companies navigate “the challenges of government investigations” rather than actually investigating the allegations and safeguarding employees.

That brings us to this morning, when Acti-Blizz announced that J. Allen Brack had stepped down from his post as Blizzard’s president to “pursue new opportunities” after less than three years, to be replaced by a pair of executives: the former head of Vicarious Visions and a former Xbox executive. We’d previously predicted that Brack was a sure bet to take the fall for the situation (our exact words were “he’s toast”), but both Kotick and Townsend remain in their roles, and it’s become increasingly clear that Activision has seized the opportunity to further consolidate power at Blizzard.

This afternoon, Activision-Blizzard has dropped its Q2 investor report. Readers will recall that following the mass layoffs and Blitzchung boycott in 2019, the company recorded plunging YOY revenues for five straight quarters in Q1 2019, Q2 2019, Q3 2019, Q4 2019, and Q1 2020. COVID finally helped the company turn it around in Q2 2020, followed by better showings in Q3 2020, Q4 2020, and Q1 2021. But as we noted, the first part of this year was also disastrous for the company’s public relations thanks to yet another round of layoffs and a dust-up over Bobby Kotick’s exorbitant pay.

Now we have Q2’s results; Q2 comprises April, May, and June and therefore doesn’t reflect any reaction to the late-July sexism scandal. Activision-Blizzard on the whole saw an increase of $370M in revenue compared to Q2 of last year, largely thanks to Call of Duty.

Blizzard itself, of course, should’ve benefited from the fact that it finally launched WoW Classic Burning Crusade and the long-delayed World of Warcraft 9.1 as well as opened Diablo II Resurrected preorders, all in June. And while World of Warcraft revenues were up (by an unspecified “double-digit percentage”) this quarter compared to Q2 2020, Blizzard still managed to lose another million monthly active users across all of its games. 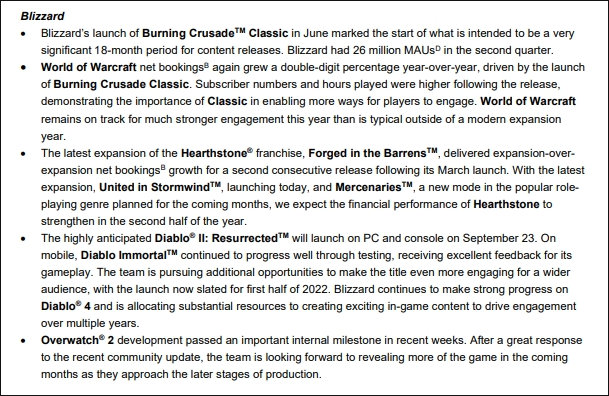 The company has now lost 12M players since the beginning of 2018, or 31%; three million of those left since Q4 2020. As always, we note here that Blizzard intentionally reports MAUs to obfuscate which games are gaining and losing players:

The press release reiterates what Kotick’s letter last week said in regard to addressing the company’s internal culture. It has already been rejected by the employee coalition.

“Following serious allegations regarding the company’s employment, compensation and workplace practices, Activision Blizzard is taking swift action to ensure a safe and welcoming work environment for all employees. We have engaged a law firm to conduct a review of our policies and procedures to ensure that we have and maintain best practices to promote a respectful and inclusive workplace. We will be adding additional staff to our Compliance and Employee Relations teams, strengthening our capabilities in investigating employee concerns. We are creating safe spaces, moderated by third parties, for employees to speak out and share areas for improvements. We will be evaluating managers and leaders across the company with respect to their compliance with our processes for evaluating claims and imposing appropriate consequences. And we will be adding resources to ensure and enhance our consideration of diverse candidate slates for all open positions. The leadership of the company is committed to creating the most welcoming, comfortable, and safe culture possible.”

We’ll be updating with the important-to-us bits from the conference call once it gets started. 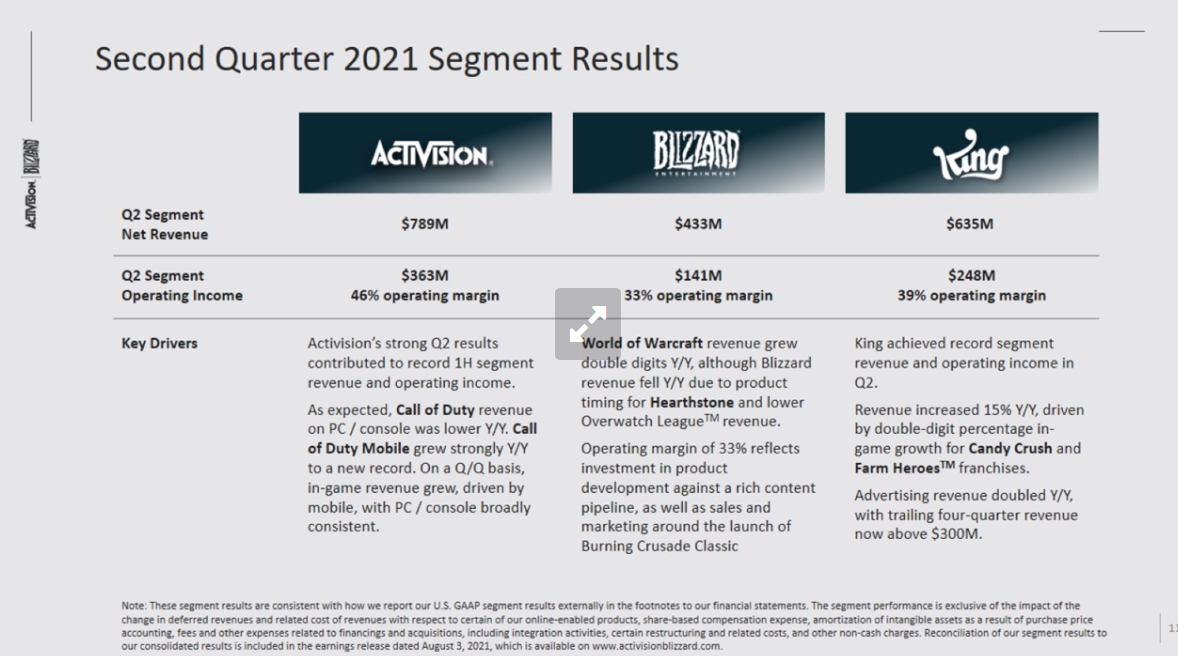 • The slides make clear that Blizzard revenue was down YOY compared to Q2 2020; it specifically blames “product timing for Hearthstone and lower Overwatch League revenue.”
• First question is about the scandal. Nothing new in the reply. Same stuff Activision has already said and that has been rejected as insufficient.
• Promising Blizzard titles will finally make it through the pipeline in 2022.
• Bit here on player trends as the world reopens post-COVID. Answer is basically the same as when they answered this question last quarter, that they still have momentum, that there’s a long-term trend for more people gaming than before, etc.
• Question about Blizzard morale and “Blizzard pride,” whether the scandal is impacting production. Jen Oneal answers by talking up developer passion and team expansion, saying that when people feel “safe and supported” the game development takes care of itself. Allen Adham jumps in to talk about building a new culture inside Blizzard with the new pipeline (PC, console, mobile, new franchises, and new genres).
• Analyst asks about the ongoing crackdown on Chinese restrictions in the gaming market (we just covered that this morning) specifically in regard to Call of Duty and CoD Mobile. Acti-Blizz talks up its hiring in the CoD and mobile segments and says it’s working with its Chinese partners in the “changing environment,” including on this issue. But the company says China represents only 5% of its net bookings right now, so it doesn’t sound too panicked.