Blizzard Entertainment isn’t the only video game studio experiencing backlash from its employees over sexism and abuse. The Division 2 maker Ubisoft has long been weathering its own parallel scandals stemming from years-long instances of misconduct and discrimination.

Over 500 current and previous employees of Ubisoft-owned studios signed a letter this week that both proclaimed solidarity with Blizzard’s staff, chastised Ubisoft for failing to take significant action to clean house, and called for industry-wide reform.

“It is clear, from the frequency of these reports, that there is a widespread and deeply ingrained culture of abusive behavior within the industry,” the letter states. “It is time to stop being shocked. We must demand real steps be taken to prevent them. Those responsible must be held accountable for their actions.”

The letter most significantly called for “a set of rules and processes for handling reports of these offences” that will be implemented as a standard across the video game industry. 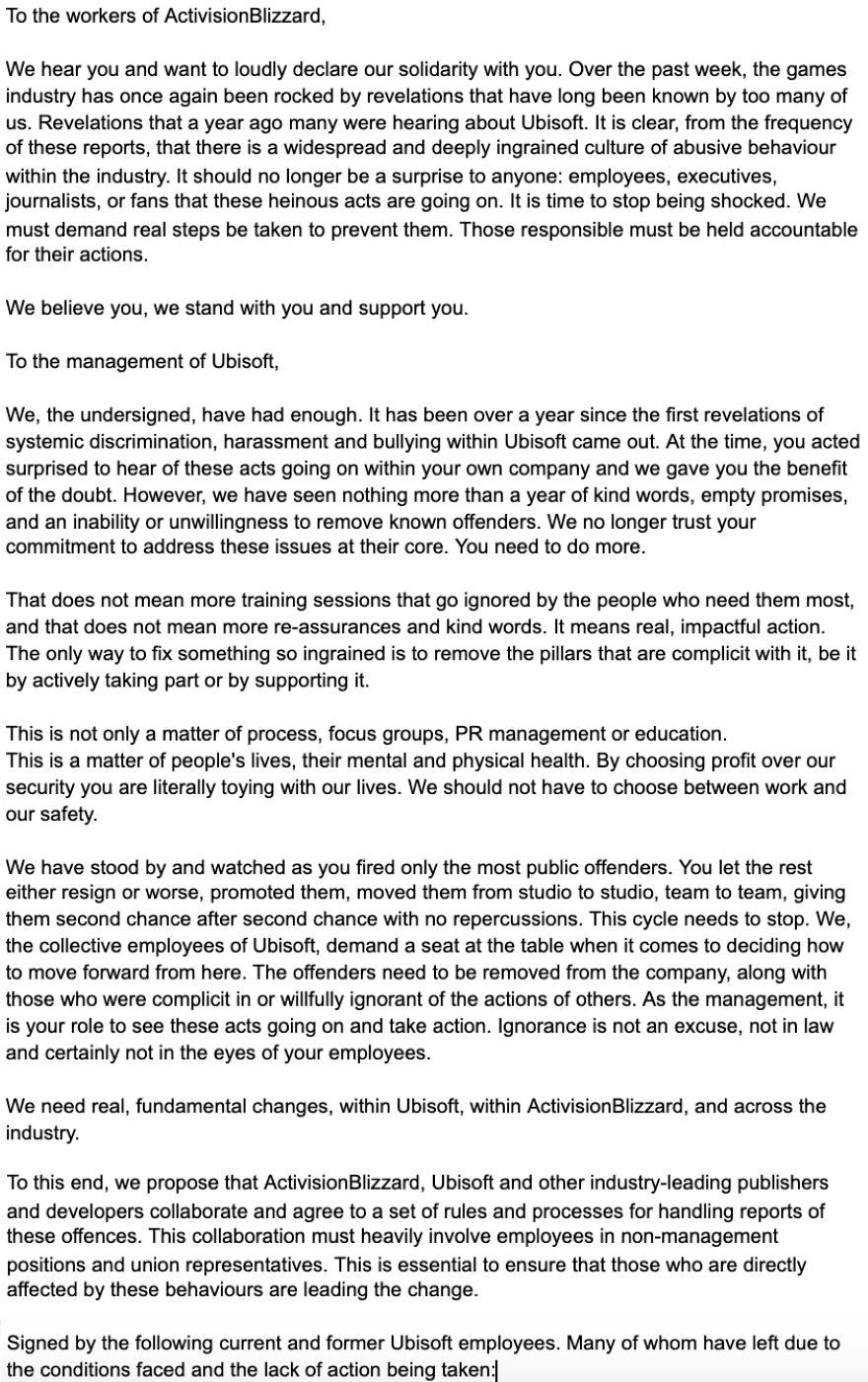 In happier news, the Ashes of Creation team at Intrepid Studios sent the workers love and support – and food, by way of lunch yesterday. 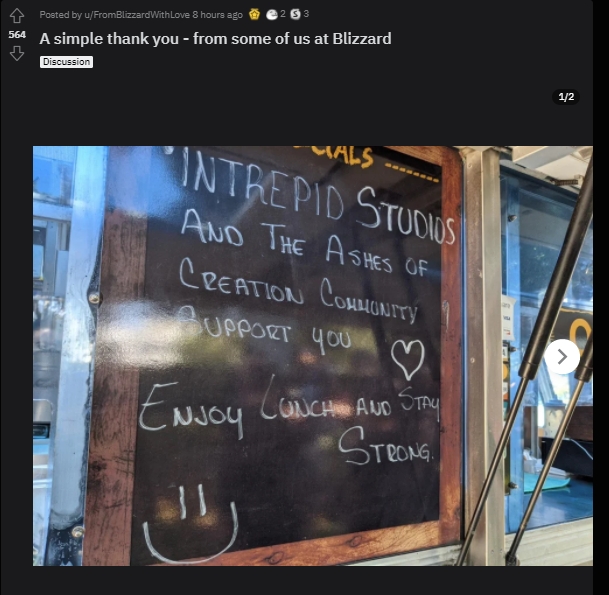 “I was brought to tears today with such a simple gesture of kindness and support by Intrepid,” an anon Blizzard developer wrote on Reddit. “I don’t know much about this project or company, but I can safely say that the industry needs more leaders like Steven and John.”

“When my colleagues and I arrived in front of the main gate, we were surprised to find a food truck, directing us to their window for complimentary meals. When I asked the staff of the truck who was providing this amazing treat, they said an ally ‘Steven Sharif’ and the team at Intrepid Studios, then pointed to a sign saying as much by the side of the window. After seeing the sign I immediately googled the company and searched their socials for any mention of this treat, assuming this may have been some publicity stunt. But, I found no such tweet, or post anywhere mentioning this good deed. And I must say, having spent much time around marketing types, I was completely flabbergasted. So I wanted to give a little recognition. It takes a certain kind of person to do something like this for strangers, and a competitor none the less, and seek out no rewards for the deed. From many of us at Blizzard, we send our love and thank you, to you and your community for the support.”

The Guild Wars 2 team sent its love as well.

A bunch of us Seattle devs are out here today in support of the #ActiBlizzWalkout!

And a lot more are supporting from home. pic.twitter.com/7eLx7MjCza

And now back to bad news. In his letter to Activision-Blizzard earlier this week, CEO Bobby Kotick told workers to contact his newly appointed outside law firm.

“I have asked the law firm WilmerHale to conduct a review of our policies and procedures to ensure that we have and maintain best practices to promote a respectful and inclusive workplace. This work will begin immediately. The WilmerHale team will be led by Stephanie Avakian, who is a member of the management team at WilmerHale and was most recently the Director of the United States Securities and Exchange Commission’s Division of Enforcement. We encourage anyone with an experience you believe violates our policies or in any way made you uncomfortable in the workplace to use any of our many existing channels for reporting or to reach out to Stephanie. She and her team at WilmerHale will be available to speak with you on a confidential basis and can be reached at ATVI@wilmerhale.com or 202-247-2725. Your outreach will be kept confidential. Of course, NO retaliation will be tolerated.”

However, as we noted, Avakian’s expertise is literally helping private companies navigate “the challenges of government investigations” rather than helping workers, so it didn’t seem like the best idea for victims to contact the company’s representation. Moreover, multiple lawyers in our own comments stressed that Kotick nowhere actually said the law firm was there to investigate any type of wrongdoing, just to review policies. And now, the internet’s had a few days to dig up even more, noting that the specific firm specifically advertises itself for “advising on union awareness and avoidance” – i.e., union busting. Readers will recall that Riot did exactly the same thing when faced with an uprising over its own bro culture.

Activision-Blizzard is working with a union-busting firm, "Wilmerhale" – the same one that Amazon is using. pic.twitter.com/lUTDThV77g

Intrepid is smart: Leave a good impression for when those folks may start looking for other work.

And it seems the fallout from the “Cosby Suite” debacle spills over into other Blizzard games:
Dexerto: Overwatch players demand McCree name change after damning Blizzard report.

Ok, i kinda had an idea: I’ll assume that the lore-team of OW are there just to do a job and aren’t involved in this shit: Make the character take a time off, lore-wise and bring him back way later on OW2 as the “hero with no name”. Go full Clint here.

Hoping we get some WoW world designers crossing over to Ashes of Creation. Love the zones in WoW. In general they really know how to stretch that engine but I want nothing to do with Blizz anymore.

really earning those devil horns and red glowing eyes this week. maybe some crisis pay is in order.

Good on the Ubi folks, they’ve been grappling with this shit for years.

The more i find out about these people, the more i want to forget i played their games.

Cant make this stuff up. What a clown show.

It’s obvious that the industry as a whole needs change. Between sexual harassment, racism, required crunch, and other such crap, it can’t keep going on like this. I’m glad to see increasing support for those that have had to deal with this garbage and are justifiably sick of it.

And again Kotick just makes himself look more like a villain from a cheesy action movie every time he does or says anything. Where’s his handlebar mustache he can twirl as he ties one of his employees to a railroad track? It would certainly fit him.

Honestly, I’m kind of surprised the game industry doesn’t suffer from a severe lack of people willing to make games with all the shit there is in the industry.

Actually, it does. But it also has a lot of people. Finding these devs who are leadership material is not easy, which is why you know a lot of them by name. And they inevitably tend to let you down.

Great way to scout for talent as well, give a free lunch and a short open house to see if some one is worth scalping.

I have to admit, when I first saw the headline about Intrepid buying Blizz employees lunch my mind also first went to it being a marketing stunt. I’m glad they weren’t promoting it at all and good on them.

Classy move by Sharif and Intrepid, making a good contrast to the behaviour of the leaders at ActiBlizz

They stuck their name on it. It’s not like they didn’t know it was gonna get covered by the media and put up on twitter.

I think it’s more likely that they’re hoping to snag some Blizzard employees. The message was pretty blatantly, “Blizzard may not care about you, but we will.”

This is a good thing! Ashes has been scooping up refugees all over the industry for years, rescuing people from layoffs and bad studios. As long as Intrepid is actually treating them well, I’m glad they’re staying in the genre.

I had the same thought that this could be a ploy to get employees to jump ship from Blizzard (which they should IMO) or it could be more of a marketing move to not market it themselves when they know Blizz employees will likely tweet/post about it and get marketing that way without the black eye. But I decided to not be cynical and just look at this as a positive XP.

Though like Bree said, if employees go over and start actually being treated decent that’s just good all around.