Welcome back, my friends: It’s time for another Activision-Blizzard investor report, and we’re expecting this one to be a ride. Readers will recall that it’s been a wild couple of years for the company as 2019 saw mass layoffs, the Blitzchung boycott, a weak BlizzCon, and plunging YOY revenues for five straight quarters in May 2019, August 2019, November 2019, February 2020, and May 2020. Q1 2020’s revenue drop was very slight and close to flattening, and then in Q2, YOY revenues for the company were up for the first time in six quarters thanks to COVID-19 lockdowns. Q3 saw those revenues hold steady, while Q4 saw revenues up 17%, suggesting the company had finally turned a real corner, despite pretending to investors everything was fine the whole time.

But this time around, the investor report is coming on the heels of some massive public relations disasters, as Activision-Blizzard forced yet another round of layoffs and investor groups alleged that CEO Bobby Kotick could pocket as much as $200M in bonuses. Last week, the company announced it was halving Kotick’s future salary and bonuses, which frankly seems like an empty gesture under the circumstances, given that investors have been agitating for this for a year, and the timing of the announcement implied an effort to soothe ruffled investor feathers.

In any case, now we have Q1’s results, which were actually just fine. Better than fine, with revenues of $2.28B, a significant increase compared to this quarter last year, though of course this quarter last year wasn’t great to begin with. Once again, the moneymakers are Call of Duty, World of Warcraft, and Candy Crush.

As to Blizzard specifically, the company talks up WoW Classic and World of Warcraft Shadowlands, which apparently drove Blizzard’s revenue growth of 7% YOY. Hearthstone appears to be doing well too. The presser reiterates a global launch for Diablo Immortal this year.

As we noted last month, Blizzard continues to lose monthly active users across all of its titles; it’s now lost 11M players in the last three years, or 29%, as measured by Blizzard’s own preferred monthly active user count. Two million of those dried up just since Q4 2020. Brutal. MAUs going back to Q1 2018:

[Addendum: We are as always left to assume that the bulk of the bleed is coming from Blizzard titles other than WoW, given that WoW’s revenue is up, though we note that Activision-Blizzard didn’t actually say that WoW subs were even/up since last quarter, which suggests they’re down (since when Blizz can say they’re up, it… does just that). We also note that PC Gamer has reported that Overwatch claims to have increased its playerbase size by 10M users in 2020, bringing it to 60M total, but those aren’t monthly actives; we have no idea how many of them still play, and they were surely buoyed during the pandemic when Blizz was running free-play weekends. So it’s unclear which games are suffering these cumulative monthly actives losses, which is exactly the obfuscation that Blizzard’s switch from subs to MAUs a few years ago was meant to create. If you’re mad about this, we direct you to yell at Blizzard, not us.]

We’ll be updating with the important-to-us bits from the conference call below as it rolls on. Some context in the meanwhile: 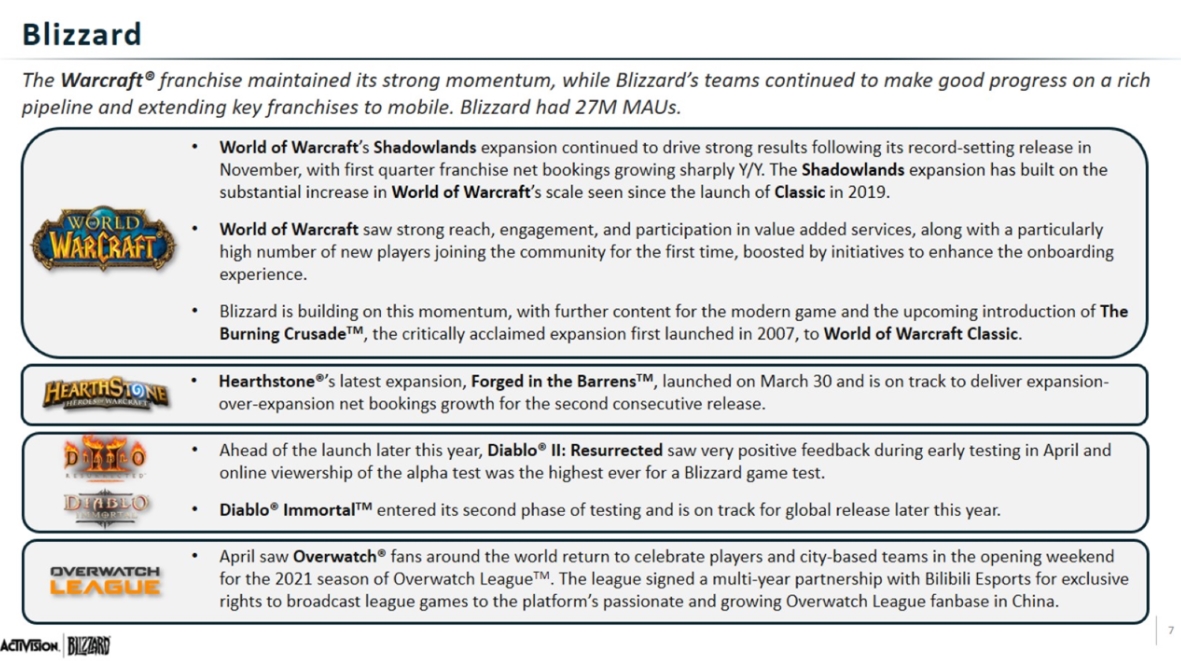 • AB is repeating the stuff about “scale” and “engagement” for WoW, which doesn’t actually mean anything. But it does sound as if WoW is the key game keeping MAUs from plummeting even faster, followed by Hearthstone. Blizzard is clearly counting on Burning Crusade to carry a lot of weight in 2021. It’s also clearly counting on Diablo II Resurrected and Diablo Immortal to buffer Diablo IV. We didn’t hear any new word about the “more frequent premium content” for the Warcraft franchise promised last quarter.
• First analyst question is on engagement as COVID restrictions wind down. AB says it varies between the franchises and game types and regions, but it insists that it’s not seeing a dramatic trend for people drifting away from AB’s core games. (There’s an implication that it’s captured a lot of new gamers, which might make up for any post-COVID drift.) This is basically the same answer given last quarter.
• Another analyst asked for an update on the Blizzard pipeline. J. Allen Brack says it’s added “hundreds of developers” on its key franchises in the last couple of years, with the goal of continuous content. He mentions feedback on Overwatch 2 following BlizzConline. (He does not mention the abrupt departure of OW2’s director, Jeff Kaplan.) Brack namedrops the multiple games in the Diablo franchise, including Diablo IV, as well as multiple mobile titles, though nothing specific is offered here, and what we know of right now is limited to Diablo Immortal.
• A second question about the Diablo franchise is met with Brack recapping how Diablo II Resurrected, Diablo Immortal, and Diablo IV are meant to fit into the franchise. If you’ve read a basic news post about these games, you already know everything said here. The overall strategy, he says, is to provide players with different ways to play the franchise on different platforms.
• Worth noting is that there was no mention of Kotick’s pay or paycut, suggesting again that the latter was meant simply to preempt any potential investor grumbling. The loss of Kaplan, who was a vice president at Blizzard, not just Overwatch’s director, also went unmentioned, though there was a whole ton of extra airtime spent on hellos and farewells for incoming and outgoing execs.