How fast did the gaming world get over Cyberpunk 2077? One month, according to SuperData’s latest revenue rankings. While CDPR’s sprawling RPG dominated the PC revenue charts in December, it’s literally nowhere to be found in January, having once again been supplanted by the likes of Dungeon Fighter Online and League of Legends.

Of note to MMO players, World of Warcraft has slipped from third to fifth place in the rankings as several other games have leapfrogged it. SuperData directly contradicts Blizzard’s investor call claims about maintaining high engagement well past the usual expansion hype, suggesting that in fact the Shadowlands bubble is already over.

“World of Warcraft player numbers fell back to normal levels as the excitement around November’s Shadowlands expansion subsided. From November to January, revenue fell by 61% and user numbers declined by 41% (these figures do not include China). This roughly matches the pattern seen for the past several expansions, though Shadowlands had a bigger launch. Blizzard does appear to have found a way to increase how often expansions are able to boost earnings. The publisher recently announced that it will be adding the 2007 Burning Crusade expansion into World of Warcraft: Classic this year. Alternating between releasing all-new and classic expansions could cause WoW revenue to spike annually for the near future, instead of every two years (the typical development time for the title’s expansions).” [Emphasis ours.]

The biggest surprise in the PC list this round might just be Valorant, which has apparently “rebounded […] thanks to the launch of a new character and fresh season of content,” with earning up 39% and player numbers – largely returning players – up 29%. 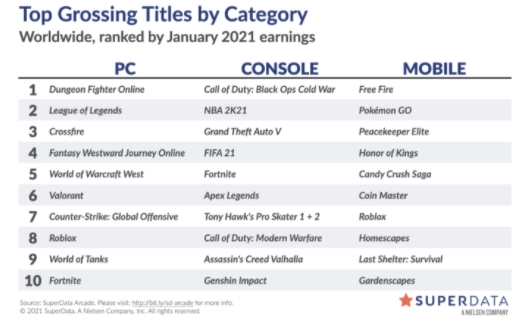 WoW Factor: Breaking down the ‘third era’ of World of Warcraft development