We’d like to think that Niantic is learning a huge lesson from its continuing efforts to making Pokemon Go more accessible: SuperData says it’s raking in the bucks right now after a season of doing just that, combined with its all-virtual Pokemon Go Fest.

“Pokémon GO had its second-biggest revenue month ever. Earnings were just 0.4% lower than in August 2016, when the game was a global phenomenon. Now, however, it relies on a dedicated core of high-spending players, and July 2020 user numbers were just 15% of what they were in August 2016. July revenue was up thanks to the ‘Pokémon GO Fest’ in-game event on July 25 and 26. The event required a $15 fee to access a range of challenges and activities.”

On the PC side, League of Legends, Crossfire, and Dungeon Fighter Online have reshuffled their positions once again; Valorant and Roblox swapped places; and World of Warcraft “west” is still hanging in there in eighth place – now above Fortnite, in fact.

The console side is as usual dominated by less-multiplayerish titles, though we note the surge for Call of Duty Modern Warfare and the vanishing of Destiny 2. 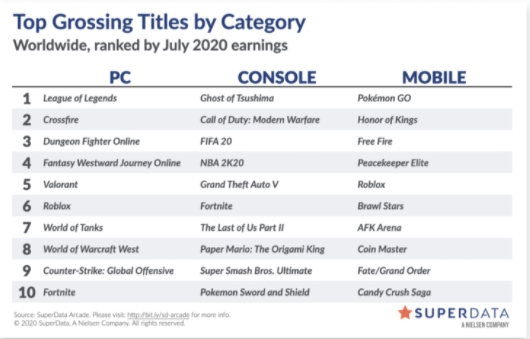