SuperData is back with another monthly report on the state of the games industry’s revenue, unbowed and unbent from its tussle with Epic Games last month.

For the PC side for February 2020, let’s tackle the big one for MMOs: World of Warcraft. It hasn’t budged from its place at #7 since last month, so you can breathe a sigh of relief there. World of Tanks leaped to the sixth spot. And Fortnite did return to the rankings after vanishing earlier this year. Otherwise, the list hasn’t changed dramatically. Notably, Roblox is still hanging in there at #8 on the PC side, but it’s fallen off the mobile list in spite of its massive numbers so far in 2020. On the console side, Fortnite’s fallen a few ticks and Apex Legends has re-entered the fray.

The analytics firm says that once again, increasing mobile revenue made up for dipping PC and console revenue to make the month’s industry revenues perk up 4% year over year. That might be changing in next month’s report, though.

“The spread of COVID-19 had a limited impact on gaming habits in North America and Europe in February, but this is changing. The most significant containment efforts like business shutdowns and travel restrictions did not ramp up until March. Many titles have since had an influx of players and spending as consumers have turned to games as one of the few entertainment options available.” 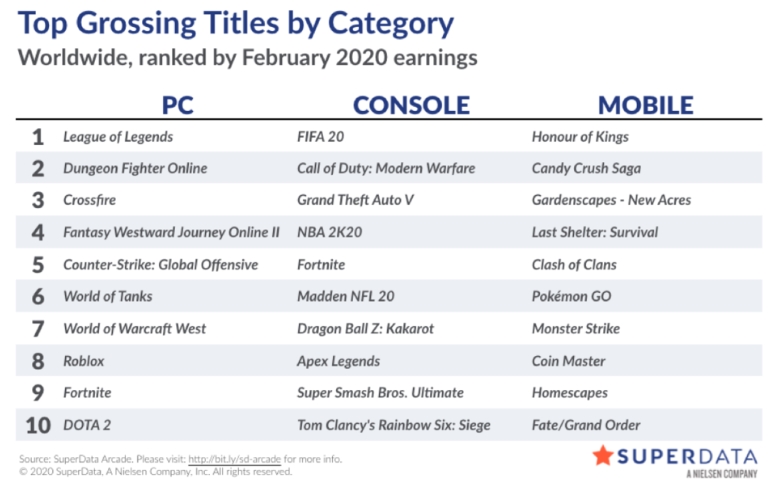 Take a peek at everything from SuperData so far in 2020: