Back in in March, when SuperData was discussing February’s monthly gaming revenue numbers, the analysis firm noted that COVID-19 hadn’t yet had much impact on gaming revenue in the west, but it expected more in March. Welp, now it’s April, meaning the March report is upon us, and that prediction turned out to be bang on. Indeed, the pandemic destroying lives left and right is really, really good for gaming companies, especially “games as a service” types with multiplayer components, even on console and PC, which had previously been taking a beating by mobile.

“Spending on digital games reached $10.0B in March, the highest monthly total ever. Individuals are turning to games as a reliable entertainment option during the COVID-19 crisis and are using online multiplayer to keep in touch with others. Total digital revenue was up 11% year-over-year from March 2019 ($9.0B). Premium console and premium PC earnings jumped as lockdowns took effect. Premium console revenue rose 64% from February to March ($883M to $1.5B) and premium PC revenue rose 56% during the same period ($363M to $567M). These game types tend to be most popular in North America and Europe, where COVID-19 prevention measures expanded dramatically in March.”

Don’t worry too much about mobile, though; revenue on mobile is still up significantly year-over-year – even Pokemon Go is on the top 10 list for mobile this month, thanks in large part to Niantic’s stay-at-home-friendly tweaks (which Andrew has covered for us at length).

As for the rest of the rankings? Fortnite has fallen off the PC list and dropped several more places on console. Gotta love seeing Animal Crossing: New Horizons take the number one slot on console this month too! League of Legends has been once again dethroned by Dungeon Fighter Online, while the entrance of Doom Eternal, Half-Life: Alyx, and Borderlands 3 helped push Roblox and Dota 2 off the list and knock World of Warcraft and World of Tanks down several more pegs.

Next month ought to be even more interesting, as lockdowns in the US didn’t begin in earnest until partway through March, but most will last the entirety of April. 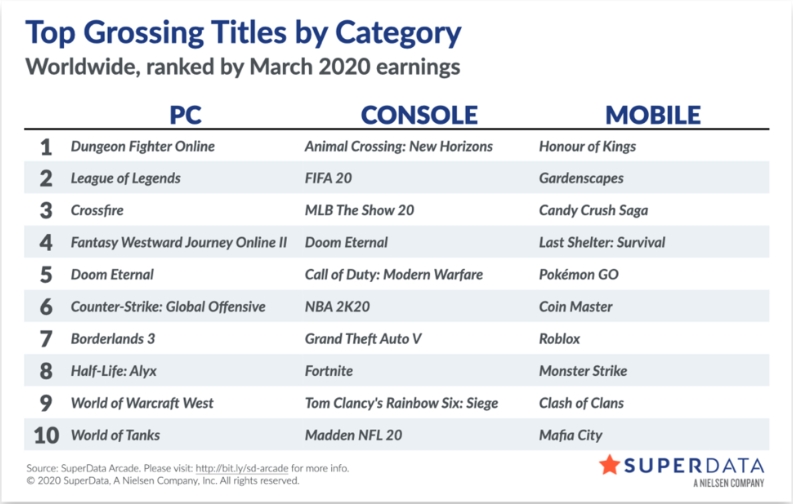 Take a peek at everything from SuperData so far in 2020:

Mortal Online 2 would like to take you on a date...

World of Warcraft kicks off Dragonflight Season 1 next week with...