SuperData’s September report on the state of the game industry’s global revenues is not going to shock anyone this month.

On the PC side, League of Legends has once again resumed the throne, as Fall Guys: Ultimate Knockout, which was #1 on the list last month with the “highest-earning launch of any PC title” since 2016, has now completely vanished from the top 10. Flash-in-the-pan? Maybe maybe. World of Warcraft (west) has crept back up a few notches in spite of the entry of Crusader Kings III above it, largely at the expense of Fortnite, as well as Valorant and CSGO, the latter two of which have likewise vanished; we can only assume that WoW’s rise will continue with the October report, even if Shadowlands is further delayed.

Incidentally, Rocket League isn’t dead, in spite of the rumors; SuperData says the “free-to-play business model paid off” in terms of revenue. Among Us, though not listed in the top 10, gets a nod as well:

“In September, the mobile version of Among Us reached nearly as many players as Pokémon GO did during the peak of its popularity in August 2016. While the indie game originally launched in July 2018, interest in the game skyrocketed during the past summer as popular Twitch streamers took up the game. However, the high player numbers have remained subdued as in-game spending was limited to a handful of cosmetic items and the ability to remove ads. The game’s mobile revenue was not enough for it to break into the top 40 on mobile. Earnings were, however, still extremely high for a game made by only three developers.” 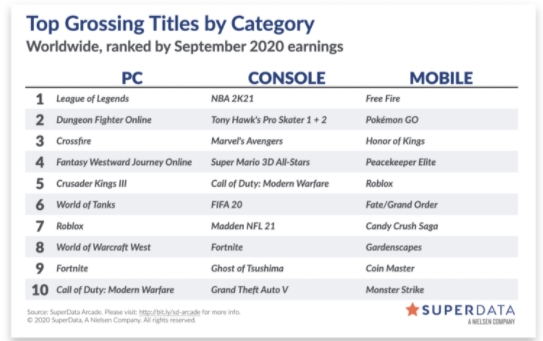