While SuperData has already put a bow on the entirety of games earnings in 2020, there’s still the December 2020 breakdown to cover, which offers a couple of shifting standings at the top of the sales charts and some newly broken records.

Surprising nobody that follows the PC gaming universe, Cyberpunk 2077 was the top seller as well as the biggest game launch of all time with 10.2M digital units, accounting for about 80% of sold copies of the RPG. While the report naturally nods to the game’s launch woes, it points out that those digital sales include the number of refunded copies, which “did not substantially affect the game’s aggregate sales.”

World of Warcraft was at the top of the pile in November thanks to Shadowlands’ launch at the end of last year, but it’s fallen from first to third place in the rankings as of December, displaced by both Cyberpunk 2077 and League of Legends.

Fortnite hit another new high this past month, with earnings that were at their highest since August 2020 and player numbers that were larger than at any point since August 2019. GTA Online also recorded its highest monthly digital earnings ever on the strength of the Cayo Perico Heist release.

Finally, multiplayer sensation Among Us saw its first fall in terms of player numbers with less people in-game than November 2020. That said, the number of players was still 2.8 times higher than Roblox and the game’s launch on the Nintendo Switch sold 3.2M copies — the highest earning version of the game to date. 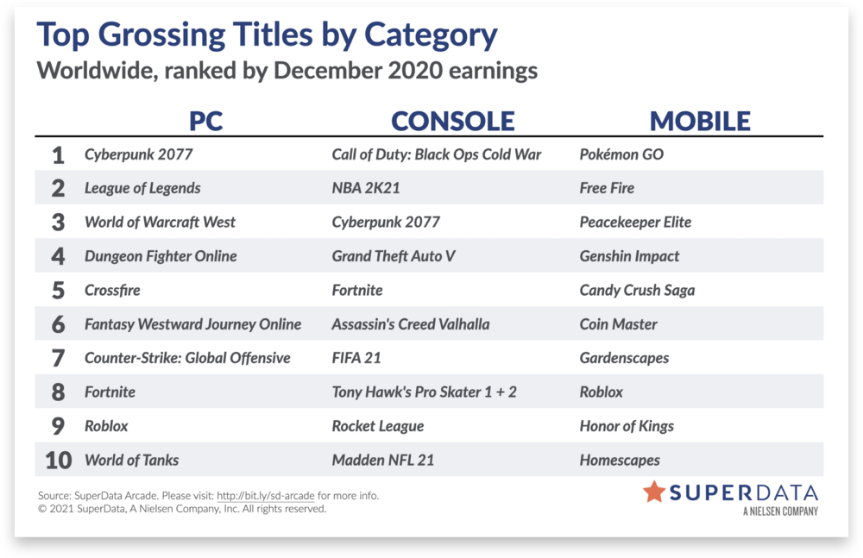