SuperData’s January 2020 games industry revenue rankings are up, with only mild shakeups since December 2019. On the PC side, Red Dead Redemption 2 dropped from the list, as did Call of Duty Modern Warfare, allowing the entry of Dragon Ball Z: Kakarot and the uptick by one place of both World of Warcraft (West only, again) and CSGO. Halo is also gone again, as Dota 2 and World of Tanks return to cap off the top 10.

On the console side, FIFA and Call of Duty continue to duke it out for supremacy, and Fortnite’s dropped another spot; SuperData specifically calls out the “gradual decline” for Fortnite and weakening revenue of Apex Legends in contrast with PUBG, where PC spending was up 512% month-over-month. Pokemon Go has fallen from the top list on the mobile side, but Roblox apparently had a really good month.

Of most interest to MMORPG players, the analytics firm also sheds some new light on how World of Warcraft is doing, especially since Blizzard stopped releasing sub numbers and the recent earnings call made multiple explicit claims from Bobby Kotick and other Activision-Blizzard reps about how the addition of WoW Classic “doubled the size of the active World of Warcraft community in the second half of 2019.” Kotick did not, as we noted at the time, claim that Classic had actually held those numbers through the end of the year. And now we know it definitely didn’t – and that he knew that as he talked it up anyway during the call. Here’s SuperData’s statement:

“The new World of Warcraft update Visions of N’Zoth successfully turned around declining user numbers. Subscriber numbers grew 17% from December to January (not including China). However, they were still down substantially (64%) from August 2019, the month World of Warcraft Classic was released.”

If we’re reading that right, WoW’s sub base spiked way up in August, then plummeted over the course of the fall, then perked back up a bit in January – but Blizzard still lost the majority of subs it had picked up with Classic over the quarter.

It sounds bad, but before you run off to dunk on Blizz in the comments, let us point out that SuperData’s display of WoW as separate East and West divisions (unlike nearly all of the other games in the rankings) has been ambiguous for the last few years, apparently because the firm lacks access to some or all of WoW’s China’s data. We note this because J. Allen Brack said specifically during the conference call that Eastern WoW player engagement with Classic had been particularly strong; therefore, we think it’s possible China may not be reflected in SuperData’s figures. (The eternal problem with reporting on an opaque for-profit analysis firm, unfortunately.)

Either way, it’ll make for interesting discussion on whether you thought you wanted it, but you didn’t. 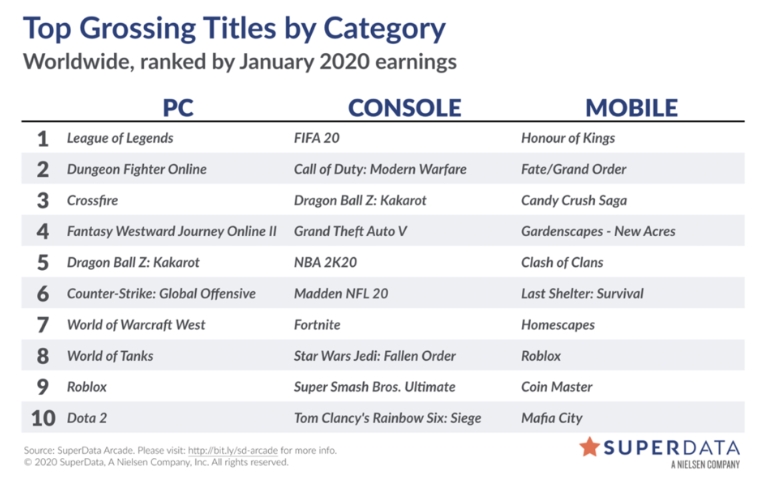 Take a peek at everything from SuperData in 2019: