Back in December, hearts skipped beats over the realization that not a single Blizzard game made it into SuperData’s top global revenue rankings for gaming in the month of November. It came at a remarkably bad time for Activision-Blizzard, that’s for sure, and much ink was spilled over what it portended for the future.

Fortunately for Blizzard, it had a much better December. According to SuperData’s most recent report, both World of Warcraft and Hearthstone are back in the top 10 for PC side. However, both are now marked “West,” and it’s unclear whether that new designation explains their absence last month – or why they’re being marked that way at all since the combination of East and West would result in a higher ranking. (Recall that SuperData went back and forth on this exact issue for many months last year too; at one point WoW East and WoW West were individually in the top 10, suggesting that SuperData does generally have access to those data.)

In any case, the true winner of December was Fortnite, which rocketed to the top slot on console (up four places) and third slot on PC (up one place) to finish out the year as king of video games. “Fortnite had its highest grossing month to date, while PUBG sold 2.75 million units across console and PC,” says the analysis firm.

Notably, Overwatch hasn’t returned to the listing, Red Dead Redemption 2 slipped from first to fifth place on the console side, and Fallout 76 has vanished entirely. 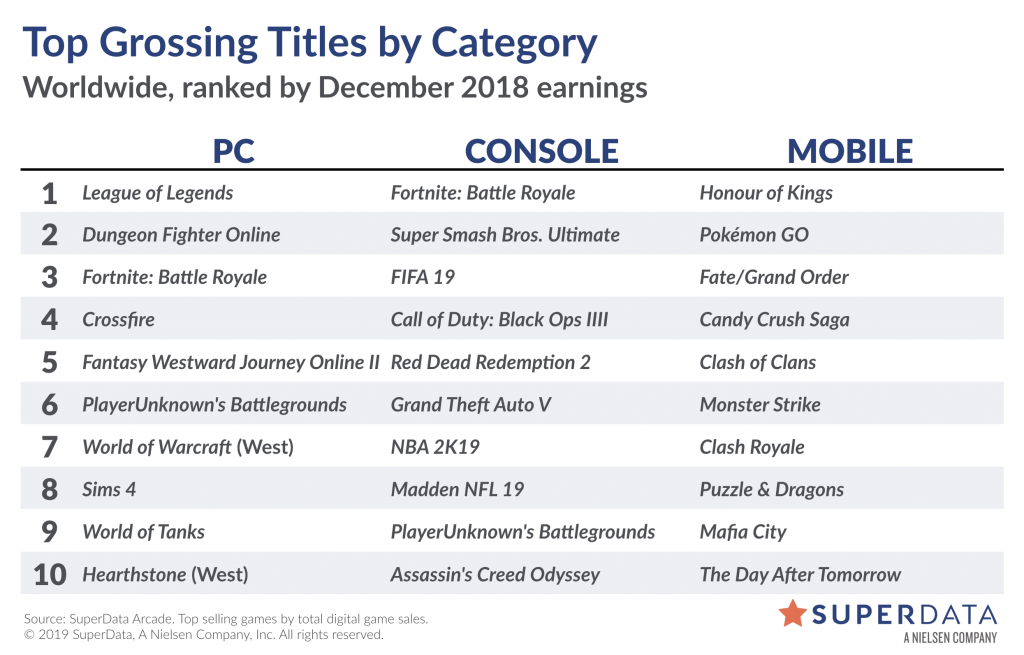 Fortnite has become the ‘largest free-to-play console game of all time,’ SuperData says

PUBG had a great June thanks to the Steam sale, SuperData says in its latest revenue ranking

SuperData July 2018: Fortnite is peaking, League of Legends is bested, Overwatch is slipping

There are no Blizzard games in the November 2018 SuperData games revenue ranking, not even WoW

2018 was the year of Fortnite and free-to-play games, according to Superdata research
Source: SuperData
Advertisement