SuperData’s December 2019 report on the global games industry’s monthly revenue is up, and it’s a head-scratcher indeed.

On the PC side, there hasn’t been a huge change at the top of the list, but World of Warcraft (West) took another tumble, from the 5th to 8th spot, having been surpassed by Red Dead Redemption 2, Call of Duty, and Roblox since November. We’d seen WoW surge to the third spot for PC with its record-setting WoW Classic launch in August, but the surge seemed over just a month later, when WoW returned to its usual spot in the middle of the top 10. Recall that in October, we speculated that we might see the first impact of the Blitzchung fallout in the December report, the first month when any lost subscription revenue from the boycott would be realized. This could be that, or it could just be that Roblox’s cross-promos and Red Dead’s huge Steam launch outdid the Blizz. The rankings lists are relative, after all, and WoW’s had worse showings in the past year – like when it didn’t make the top 10 at all.

No other Blizzard titles make any of the lists at all this month, though Activision is another story. But don’t miss Destiny 2 making a comeback over there on console, and Roblox made two of the lists as well as mobile revenue continues to outshine the other platforms.

“Substantial year-over-year growth in mobile revenue (28%) more than offset falling Console and PC earnings (down 25% and 4%, respectively). Console spending was down partially due to shrinking Fortnite revenue (December 2018 was the title’s highest-earning month ever) and also due to fewer major premium games being released in late 2019 compared to the 2018 holiday season.” 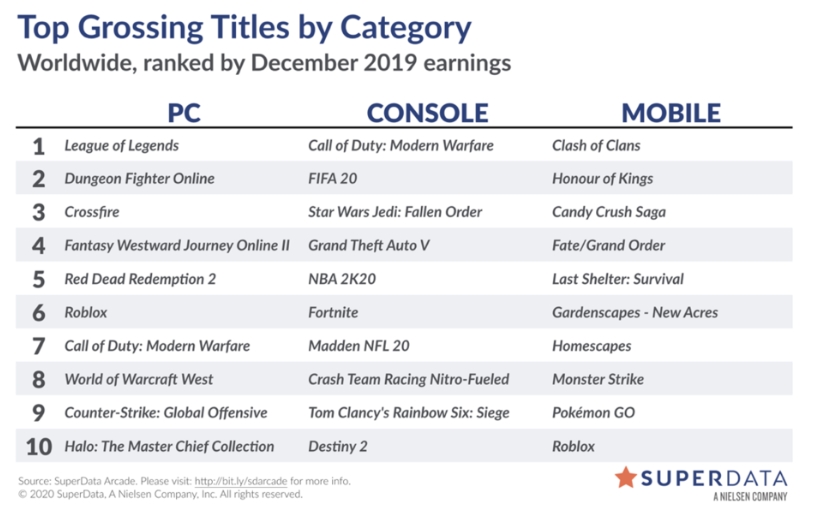