Whether any of us likes it or not, mobile gaming continues to prove to be a lucrative thing, as the November report from SuperData shows. The research company reports that console, PC, and mobile spending was up 5% compared to the same time last year, thanks to a 20% year-over-year increase in mobile spending which represented 59%, or $5.58 billion, of the $9.5 billion spent digitally across all games.

As for the charts themselves, the PC section sees League of Legends once more on the top, while Pokemon Sword and Shield took #1 on the console side and Honour of Kings topped mobile. Other pieces of data from the report note that Red Dead Redemption 2’s Epic Games exclusivity found “meek” interest with only 408K units sold during the month-long stint on the storefront, and that free-to-play console spending is continuing to trend downward, dropping 41% or $84.7 million when compared to last November. It’s not all bad news, though, as Star Wars Jedi: Fallen Order had its best-selling digital launch in franchise history and Pokemon Sword and Shield was Nintendo’s top grosser for all of 2019. And closer to home, World of Warcraft’s western version held steady in the #5 slot on PC. 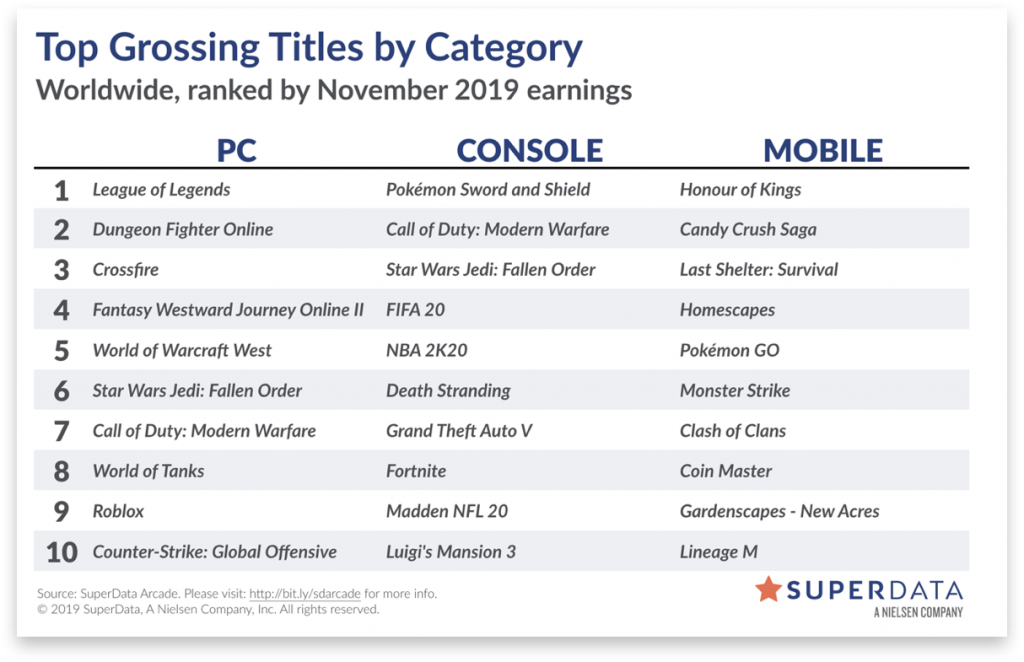 Here’s all of SuperData’s 2019 reports to date:

• World of Warcraft took a tumble in SuperData’s December 2019 revenue rankings
• SuperData says the premium games market took a ‘gap year’ in 2019
• SuperData November 2019: Spending rises thanks to mobile, WoW holds steady
• SuperData October 2019: League of Legends is back on top as console and PC trend downward
• Superdata says in-game spending is down thanks to gamers’ leeriness of monetization schemes
• SuperData September 2019: WoW Classic’s surge is over, Fortnite sees worst month since 2017
• SuperData August 2019: WoW Classic drives a massive subscription surge
• SuperData July 2019: Fortnite, League of Legends tumble as GTAO surges
• SuperData June 2019: WoW’s back in the top 10 as Overwatch players have spent $1B on in-game content
• SuperData May 2019: Overwatch returns to the top 10 as battle royales duke it out
• SuperData April 2019: WoW and Apex Legends depart the revenue rankings, Hearthstone re-enters
• SuperData March 2019: The Division 2’s strong entry and the dominance of battle royale
• Superdata February 2019: EA’s Apex Legends and Anthem crushed it as Blizzard fumbled
• SuperData January 2019: Digital gaming revenue is down across the board as Fortnite has ‘increasingly lumpy revenue profile’
• SuperData December 2018: World of Warcraft returns to the rankings, Fortnite takes the year
• 2018 was the year of Fortnite and free-to-play games, according to Superdata research
source: SuperData
Advertisement