Were you worried about the success of The Division 2? Maybe don’t be. Ubisoft’s big multiplayer sequel entered Superdata’s global gaming revenue charts at #1 on the console side for March.

But while they aren’t holding any records, it’s the battle royale titles still bringing in the bucks month to month, as both Fortnite and Apex Legends retained high ranks on PC and console. “Fortnite continues to hold steady despite increased competition,” says the analytics firm. “Fortnite revenue grew 7% year-over-year in March, which is the first year-ago comparison that includes console, PC and Mobile (Fortnite began its iOS beta in March 2018). We expect that Fortnite will face tough comparisons going forward as it’s unlikely to replicate last year’s meteoric rise during Spring and Summer 2018.”

And if you were looking for a Blizzard comeback? It’s not there. In fact, World of Warcraft “west” – again, still inexplicably split from “east” – has fallen another tick, to #10 PC side. 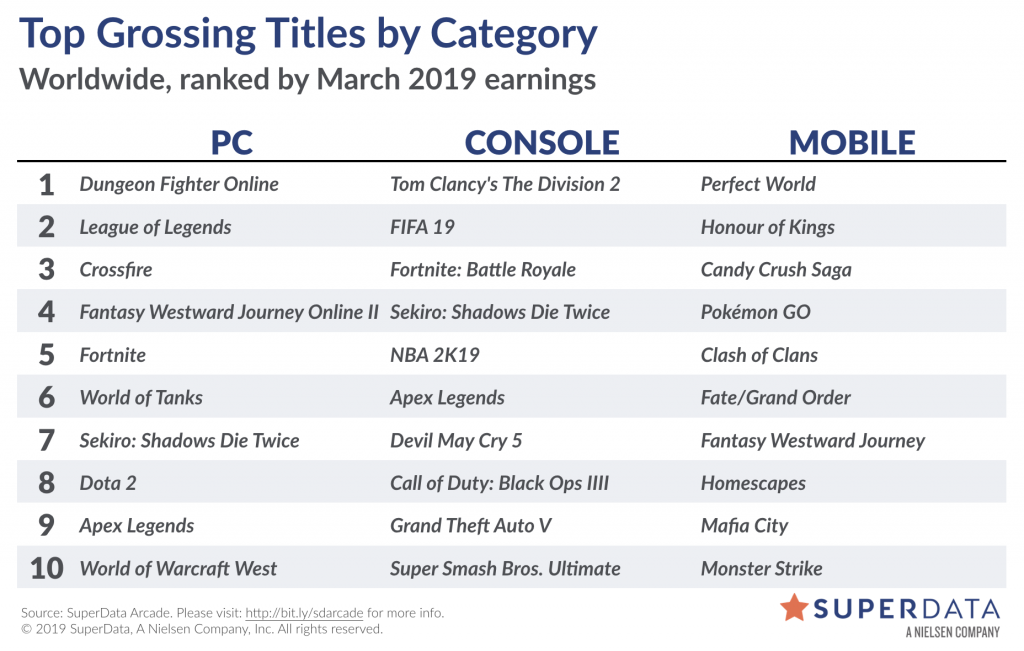 • World of Warcraft took a tumble in SuperData’s December 2019 revenue rankings
• SuperData says the premium games market took a ‘gap year’ in 2019
• SuperData November 2019: Spending rises thanks to mobile, WoW holds steady
• SuperData October 2019: League of Legends is back on top as console and PC trend downward
• Superdata says in-game spending is down thanks to gamers’ leeriness of monetization schemes
• SuperData September 2019: WoW Classic’s surge is over, Fortnite sees worst month since 2017
• SuperData August 2019: WoW Classic drives a massive subscription surge
• SuperData July 2019: Fortnite, League of Legends tumble as GTAO surges
• SuperData June 2019: WoW’s back in the top 10 as Overwatch players have spent $1B on in-game content
• SuperData May 2019: Overwatch returns to the top 10 as battle royales duke it out
• SuperData April 2019: WoW and Apex Legends depart the revenue rankings, Hearthstone re-enters
• SuperData March 2019: The Division 2’s strong entry and the dominance of battle royale
• Superdata February 2019: EA’s Apex Legends and Anthem crushed it as Blizzard fumbled
• SuperData January 2019: Digital gaming revenue is down across the board as Fortnite has ‘increasingly lumpy revenue profile’
• SuperData December 2018: World of Warcraft returns to the rankings, Fortnite takes the year
• 2018 was the year of Fortnite and free-to-play games, according to Superdata research
Source: Superdata
Advertisement