SuperData’s August global revenue report for the games industry has more than a few eyebrow-raisers this week. On the PC side of things, World of Warcraft West has fallen all the way to 10th place, its lowest relative position since June 2019, when it re-entered the lists at 10th after a few months off it completely. One reason is the emergence of Fall Guys at the tippy top of the list, followed by Crossfire, both of which knocked League of Legends, Fantasy Westward Journey, and Dungeon Fighter Online, the three games usually jostling for gold, silver, and bronze.

“Fall Guys: Ultimate Knockout had the highest-earning launch of any PC title ($185M) since Overwatch in May 2016,” SuperData says. “The innovative take on battle royale, published by Developer Digital and developed by Mediatonic, was free to PlayStation Plus subscribers, but 8.2M players still paid for the PC version. The breakout success of Fall Guys was especially impressive since it came from a relatively small development team. The game’s chaotic, wacky gameplay was a big draw on gaming video content platforms like Twitch, where it topped the viewership charts in the lead-up to launch.”

World of Tanks has also dropped from the PC rankings, while Valorant took quite a tumble. Fortnite, on the other hand, actually performed extremely well in August, which may or may not bolster Apple’s claim that Epic’s mid-August lawsuit was merely a marketing ploy. SuperData doesn’t think the PC revenue spike had much to do with that, for what it’s worth; it separately notes that mobile revenue plummeted after the dispute began, even pointing out some of Fortnite’s mobile revenue isn’t even included in these rankings, as if to warn Apple’s lawyers not to try misconstruing its post (as it’s previously done).

“Fortnite revenue grew 76% month-over-month on PC and console, more than offsetting its falling mobile revenue. Player spending jumped in late August thanks to a new season of content featuring cosmetic items based on Marvel Comics characters. This is in sharp contrast to its mobile revenue, which fell by 62% after Apple and Google removed the game from the iOS App Store and Google Play as part of the ongoing legal dispute between Epic and the two technology companies. (Our published mobile revenue totals do not encompass the Android version of Fortnite available outside of Google Play.)” 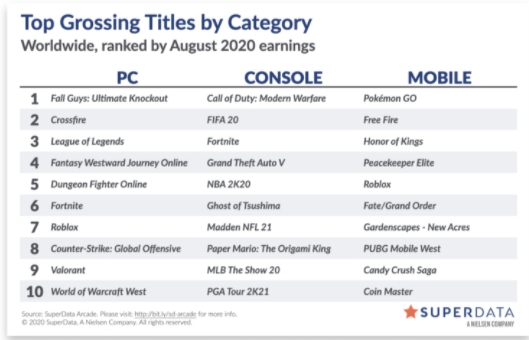