Is anyone here familiar with Wipeout? It was an obstacle course game show where contestants had to avoid some pretty plush yet hard-hitting goofy obstacles in an elimination format. It was a lot like Ninja Warrior except it didn’t take itself quite so seriously, or was like American Gladiators without the ’80s fabulousness.

I’m bringing those shows up because they should put you in the general mindset of what Fall Guys: Ultimate Knockout is trying to be: a battle royale game that’s less about killing your way to the top and more about surviving bruising yet colorful obstacles.

I managed to get selected for several rounds of the game’s technical beta, including two of its closed beta tests and the most recent (and more open) weekend technical beta. Now that the NDA curtain is lifted, I can openly say that this game is something special, especially for those like yours truly who loathe battle royale games. 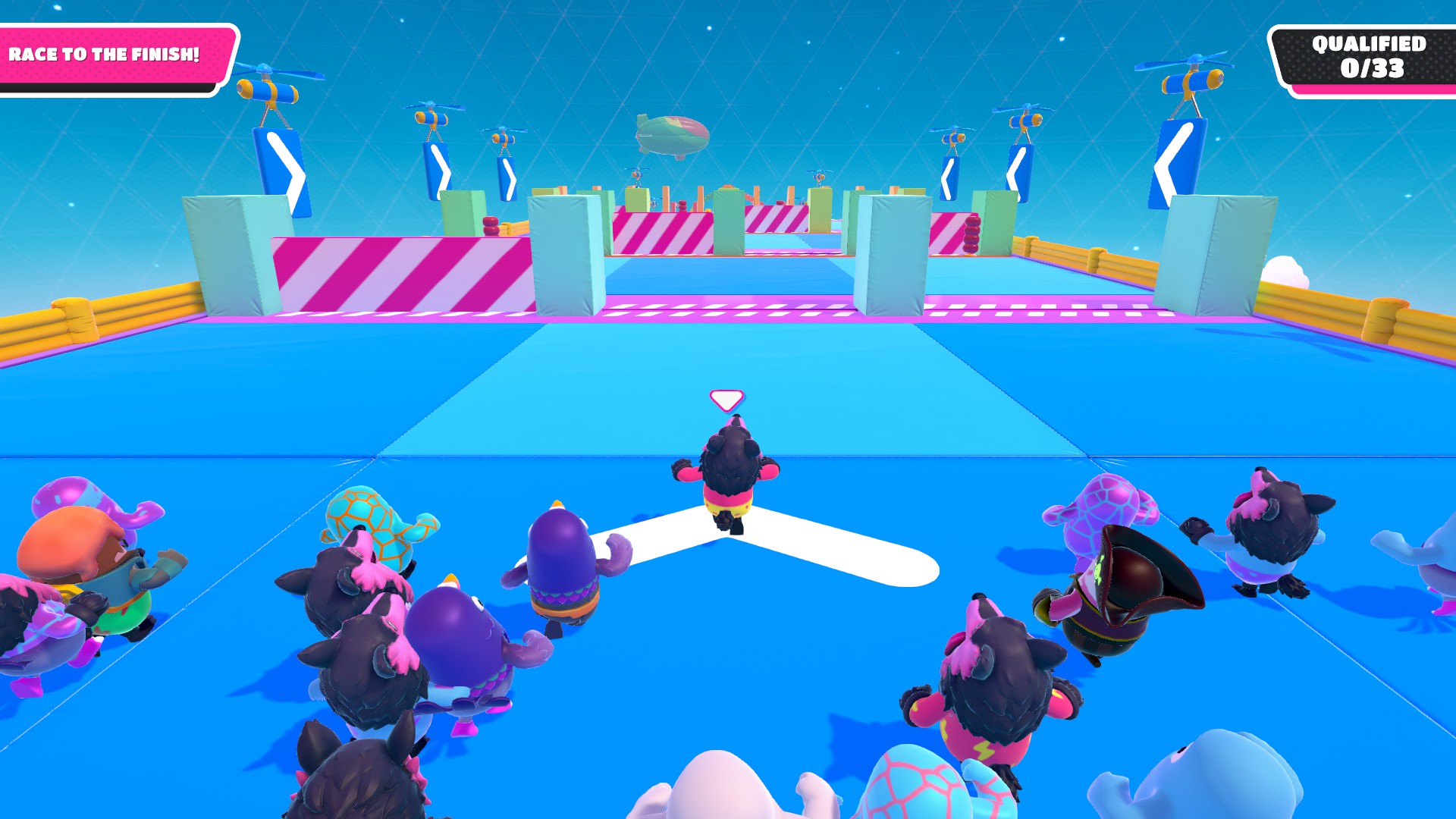 From the very off, Fall Guys does its level best to convey a sense of being in a whimsical and upbeat game show. Player avatars can be dressed in a variety of silly costumes as 60 of them are put through five rounds of candy-colored hell, with a number of contestants being eliminated over the course of each stage until the final round determines the one person that makes it to the top of the heap.

As one might expect from the title, the Fall Guys have a tendency to get bowled over rather easily. This certainly isn’t helped by the big, squishy obstacles that are flung their way, but they also have a sort of gently janky quality to them thanks to their bulbous bodies and short, stubby legs. Controls are simple — jump, dive, and grab — and they feel like they toe the line between responsive and unexpected. Learning how far your character can jump and how long it takes for them to recover from falling over is a key part of surviving each round. 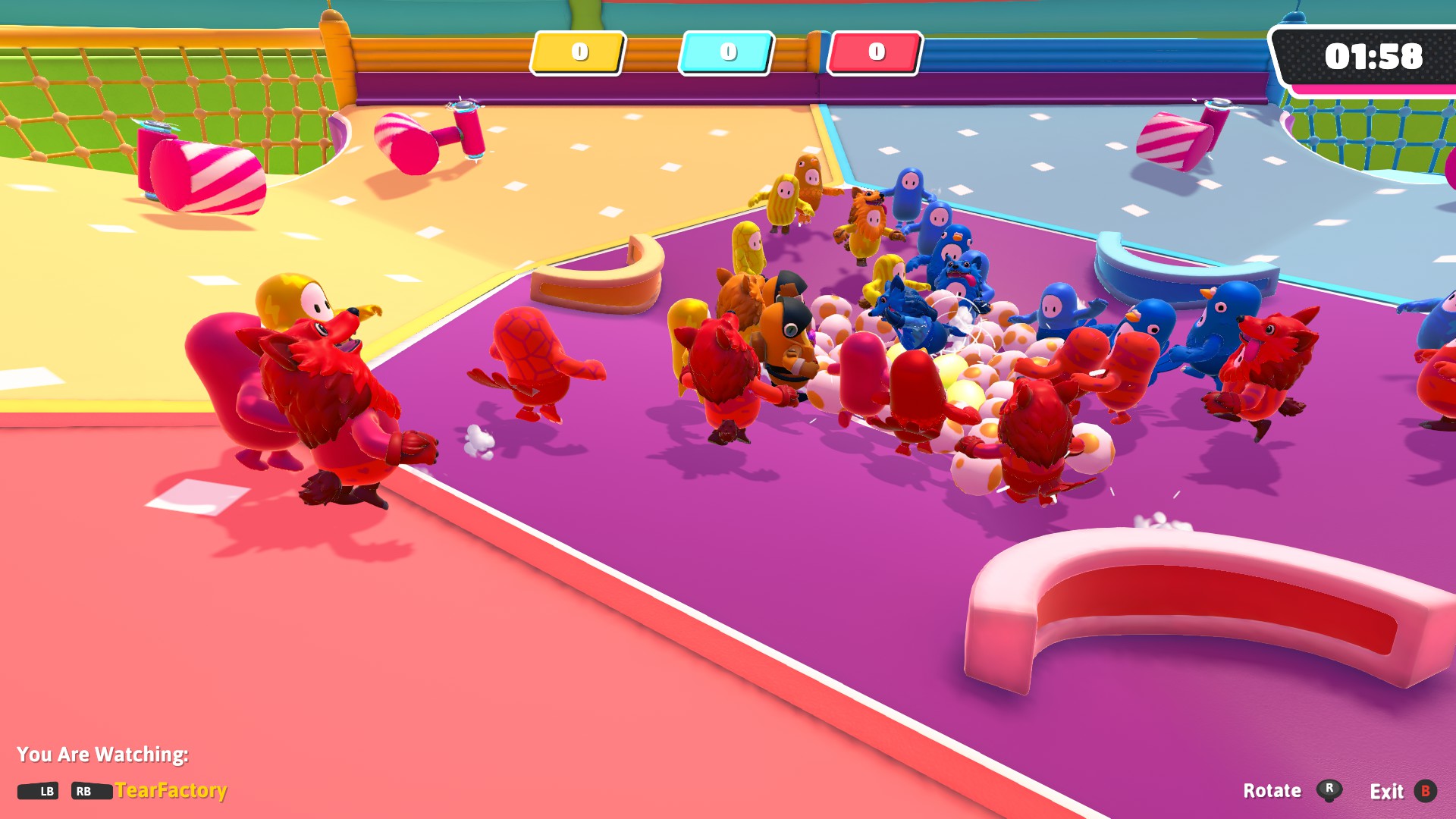 The bright and colorful nature of the game paired with the bubblegum bounciness of the soundtrack all combine to make a battle royale title that’s satisfying to watch and even more enjoyable to play. The stakes never feel quite dire or overly competitive, and most everyone is trying to just get through as fast as possible instead of cheese the system. There have been some cases where people gatekeep the finish line and grab people to prevent them from finishing, but that’s about as trollish as behavior got during my play time.

Otherwise, the game celebrates failure, leading to plenty of moments where things going wrong was half of the enjoyment for me; during one obstacle called See-Saw, myself and about a dozen others were trapped because one of the tilting platforms was not going down, forcing us to try to scramble to the other side to get across and resulting instead in a sort of mad scrum of people running into and falling on top of one another. Even when you’re eliminated, you can continue to watch the rest of the “show” you’re a part of, and witnessing some of the close calls and incredible falls is a good time. Fall Guys is easily one of those games where it’s perfect for spectating.

I really can’t stress enough how much this presentation makes an otherwise rote sub-genre like battle royale so much more engaging to me. Fall Guys really doesn’t want you to feel stressed out or anxious while you face elimination, it wants to playfully knock you over without any malice and with a big, goofy grin on its face. Even in matches where I was booted on the first round, I had things to laugh at. 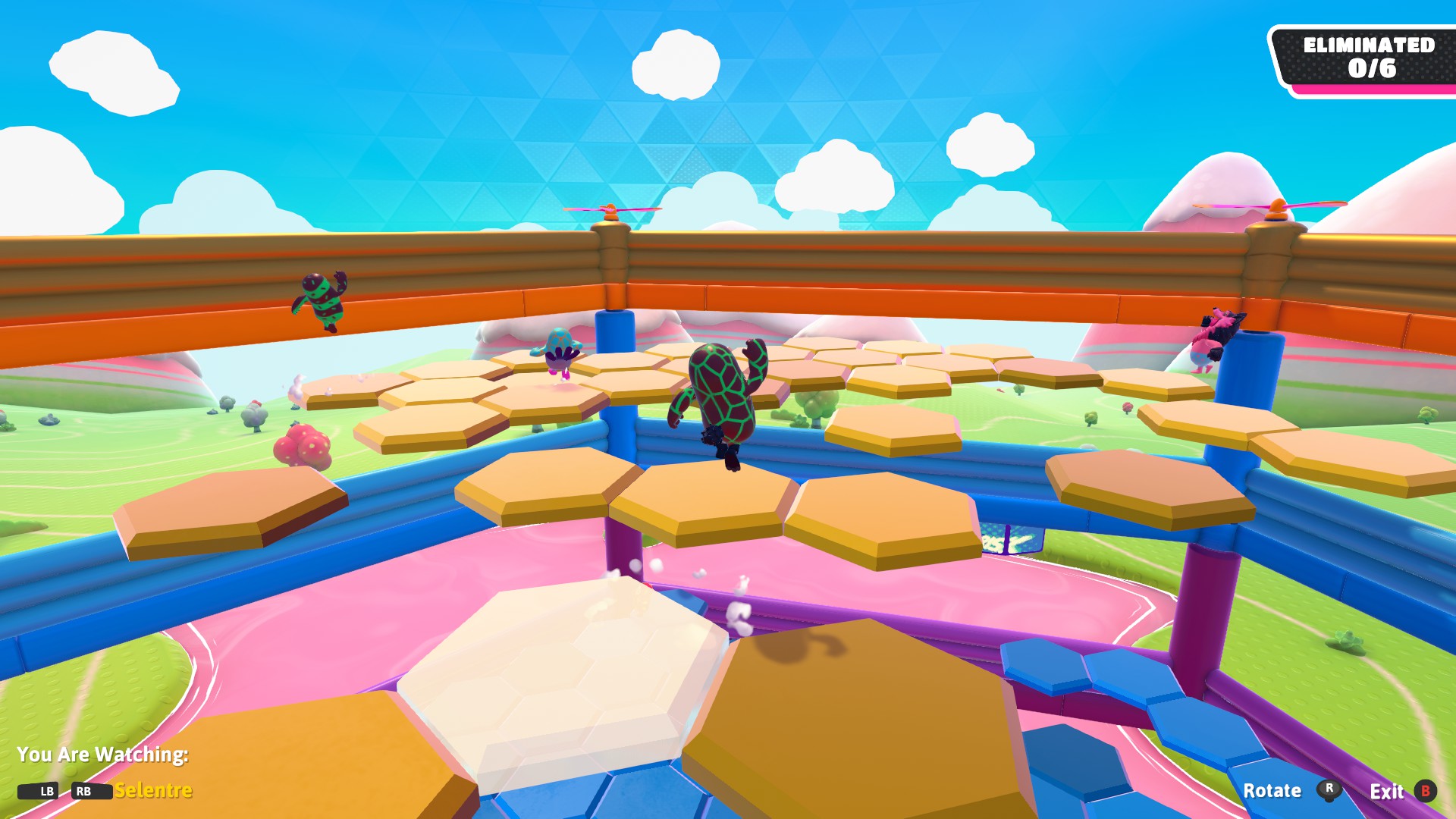 The primary point of all of this goofy competition is earning XP to rise through a season’s various ranks to unlock a number of cosmetic rewards. There is also Kudos to earn for taking part in a show and Crowns for winning, two currencies that will be used in the final game to purchase even more rewards. Additionally, Kudos can be purchased for real money, which means that this one will have a $20 price tag on top of an optional cash shop. It’s hard to really gauge how necessary buying Kudos will be, as the beta tests did not have the shop live, meaning there were no prices to share. That said, earning Kudos is a regular part of gameplay, so ideally the cash shop intrusion won’t be too severe.

Even with this unanswered monetization question overhead, I can’t recommend Fall Guys enough, barring some sort of horrifyingly bad business scheme. At long last, someone has actually bothered to develop a battle royale game instead of put out what feels like the barest minimum of design work, and using the aesthetic of a bright yet brutal game show is a brilliant choice. Mediatonic has created a compelling, pastel, plush, madcap competition that deserves to be noted.

Fall Guys will release on Steam and PS4 on Tuesday, August 4th.