It’s now pretty clear that Activision-Blizzard’s days of limitless growth and endless record-setting are over, at least for now, as the company’s now-released financials indicate revenues down slightly (about 7%) compared to this same quarter last year and down significantly (over 23%) from its record $2.38B showing for fourth quarter 2018. Generally, we’d assume seasonal sales in Q4 exacerbated that gap, but the same period last year saw less than a 5% drop (Q4 2017 was $2.04B; Q1 2018 was $1.97B), thanks to Destiny 2 and stronger Overwatch performance and WoW expansion sales at the time. In fact, the best thing the company can say this round is that it outperformed expectations for this first quarter and “made progress against the plan outlined in [its] February earnings call to reinforce the foundation for future growth.”

In its investor report, Acti-Blizz reiterates that it’s “increasing development for [its] biggest, internally-owned franchises, for both upfront releases and in-game content, as well as investing in platform expansion on PC and mobile and new geographies” – including esports. Blizzard itself counted 32M monthly active users for the quarter – that’s down from 35M last quarter and down from 38M in Q1 2018 as well.

Readers will recall that Acti-Blizz’s record-setting previous quarter was contentious indeed, as executives followed it up by slashing hundreds of jobs across the company as its stock see-sawed. After-hours trading today shows the stock just a few percent down on the news. 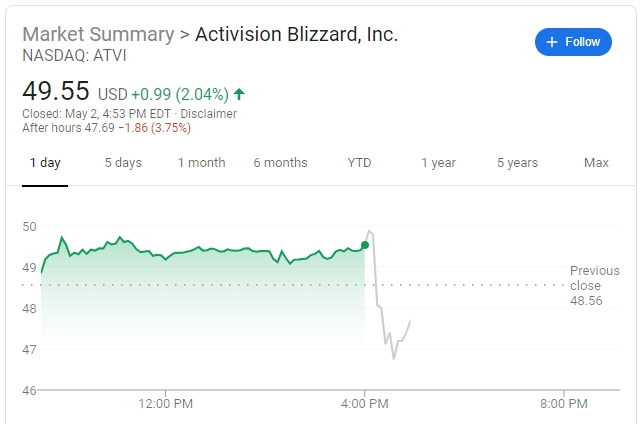