As some of you recall, Gigantic is one of those games that looks like a MOBA and smells like a MOBA but — for a while, at least — was refusing to give in to the MOBA label. Unless you’re one of the big four MOBAs, the genre has a rep for doom (I’m probably one of the few people mourning Solstice Arena, but it was actually a clever little game.) But Motiga is now grudgingly calling Gigantic a “shooter MOBA” now, and at my demo at E3 yesterday, I did my best to peel back the labels to see the game for what it really is.

When I play an MMO, I generally hate instanced PvP. I hate ladder matches, I hate arenas, and I hate most battlegrounds. Nevertheless, I enjoy MOBAs because they’re not MMOs. They’re not persistent worlds, the communities don’t feel as tight, and they’re smaller-scale games, and when I can’t play an MMO, I want something accessible, something I can play with just about anyone in short bursts without any hurt feelings to cause drama. As you can probably guess, that usually leaves MOBAs out. League of Legends‘ bot battles are fun sometimes, and Heroes of the Storm with chat off works too, but I’d be lying if I said that, aside from promotional events, I feel much compulsion to go play them.

But as I sit here looking through my Gigantic pictures and writing this article, I honestly wish I could be playing the game with you right now.

Gigantic is probably most similar to SMITE in the MOBA space because of its combat and perspective, something I really wish more MOBAs would emulate. My “coach” for this demo, Motiga’s Streaming Community Relations Specialist Forrest “Thor” Raynard, admits he’s a SMITE fan, so his nickname isn’t a total accident. Comparing the two games, he agrees that the combat is certainly similar, but Gigantic lacks lanes. It feels more free, and while SMITE may have unique combat for a MOBA, it’s difficult to argue that it doesn’t play like a MOBA. Gigantic can get away from that feeling in a way this site’s readers can appreciate: It plays like an MMO.

No, the game isn’t so persistent (more on that later). It’s the point of view, as well as the emphasis on having big mobs you protect instead of the usual laning game, that make it stand out. In a way, it reminds me of a speedy version of World of Warcraft‘s old Alterac Valley battleground. Rather than ask you to farm forever for your guardian, it’s just there, and it needs to be protected as it moves towards your enemies. The difference is that I actually feel as if I can protect it. 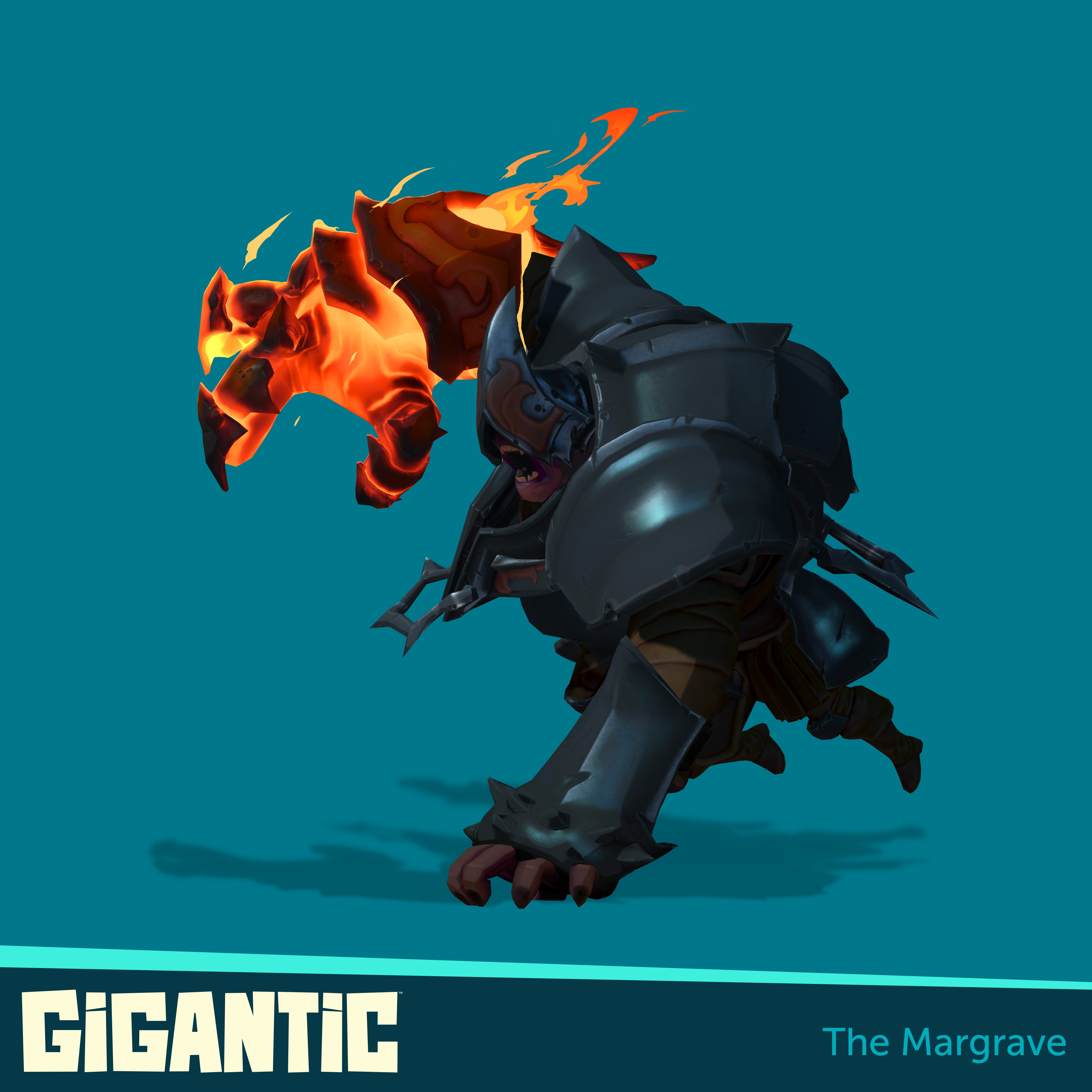 Meet the Margrave, my demo hero. Normally in MOBAs, I can’t play melee characters. They’re too soft, they die too fast, and they require a lot of teamwork from a community I find often severely lacking in PUG teamwork. But when Raynard asked me what role I usually play, I decided I’d challenge the game: “Tanks,” I said, “or something that doesn’t die easily.”

The Margrave is very much something like what I’d play in an MMO. He can take damage, he’s got a few charges, and he’s got this projectile reflector I can use to mess with people. While MMOs generally have something similar, the key difference with Gigantic is that everything requires aiming and we’ve got physics to deal with. That means projectiles are real and I can physically put myself between whatever I’m guarding and take the hits. It feels much more heroic than hitting an ability that gives me a dice roll chance to intercept an attack. My demo was on the Xbox One, so I had to use the controller, but it wasn’t terrible. It felt better than when I tried playing TERA with a controller!

That difference between platforms is minimal, though. Raynard admits that PC gamers do have more fine control over their characters, but Motiga’s done some testing and believes that overall, people do best with whatever they’re most comfortable with. The difference isn’t great enough to keep the two platforms separate, but if you’re someone who wants to run an Xbox-only tournament but believe consolers shouldn’t play with the PC master race, Gigantic does give you the option to only be matched with people of the same platform you’re playing on.

The game itself never felt like a MOBA to me. I didn’t feel as if I was fighting wave after wave of minions. There were no towers. It felt like an MMO battleground in that I would die, respawn, and rush to the front to keep the objective going. Death didn’t feel like a MOBA punishment, combat didn’t feel like some grindfest I needed to focus on while having to watch out for PvP, and I didn’t need to buy any items during the game (updating moves on the fly is a bit troublesome, but I’m sure it’s easier once you know the descriptions by heart). It just felt like something I’d play in any modern MMO with instanced combat except more accessible.

There’s some persistent progression yet to be revealed, and how the game will be taking your money is still up for debate. Overall, the game seems most similar to Heroes of the Storm, with a bit more focus on skills and team fights, and as long as the persistent leveling isn’t more about power than visual customization, Gigantic really could be the next MOBA I play for myself rather than for my friends.

Still, the demo was just a single match. I learned to aim my abilities better. I learned that I can choose guardian bosses that make up for power-ups or talents my team may be missing, such as having healing guardians or minimap enhancing guardians. I learned to use the environment, not only to dodge attacks but to put my enemy in positions where he may accidentally jump off a cliff. I was reminded of why tanks shouldn’t run too far ahead, of the sadistic joy of watching someone kill himself on my reflecting shield, and of the frustration of being one hit from killing my opponent. No, none of this will carry over into the future, but MMO battlegrounds are the same way: There’s always a momentary thrill before queueing up for another match. The difference is, I MOBA when I can’t MMO. If I’m going to MOBA, so far, I’m thinking it’ll be Gigantic.