Now that Crowfall has split with the whole fixed-archetype thing, it’s a world of possibilities over at this PvP title. And while there will be plenty of possible class and race combinations available to choose at launch, it won’t be anything goes.

The team said that it had to make decisions on which combos to include: “Our initial list was derived based on a number of factors. It took into account the cost to support this combination, the balance of races for each class and classes for each race, and of course the cool factor of each particular combination.”

One brand-new combination that Artcraft announced this week was the Elken Cleric, or “Holydeer” as we are now calling it. When you roll one, you don’t become celibate… you go stag.

We’ve got the full chart for you after the break. The team said that black cells are currently implemented combinations, white are ones that are planned but not finished, half-and-half are ones that only have a single gender so far, and blank won’t be there at launch but perhaps afterward. 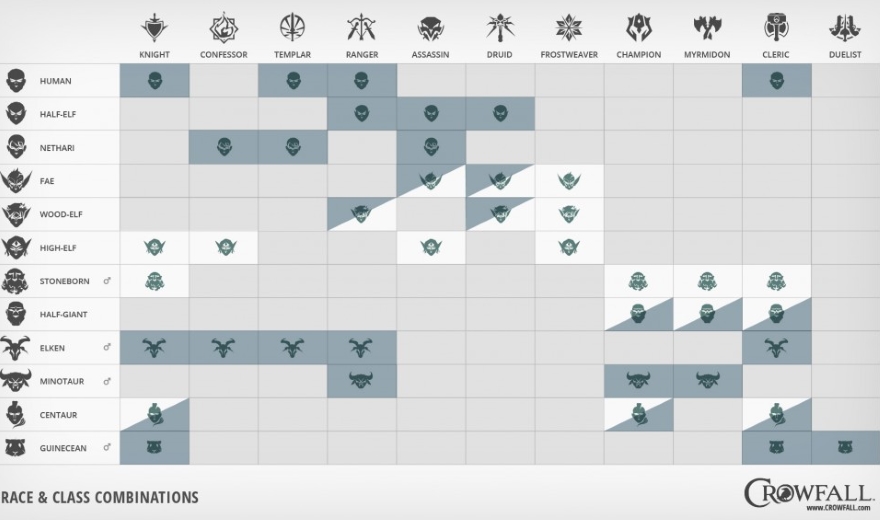 Eyeballing the number of blank squares in that grid, seems like it’s just crying out for an “any race / any class” cash shop perk. Just sayin.

Elkin Cleric is a new addition since the race introduction!

Ever since 3rd ed DnD, I’ve grown to hate race/class restrictions. Devs need to get more creative so that players are allowed to build their character as they see fit.

I keep thinking that the way this is presented, it’s a game that’s actually out there instead of one that’s still literally (at least) a year from actual release. :|

At least the guinea pigs still get their own class

Would probably be too hard to justify Centaurs or Elkmen becoming proficient burrowers.

I’m glad they can’t pick many classes, the last thing we need is half the game to play a guinea pig… it’s bad enough that it exists at all >.>

One could say that this matters less than in MMOs usually, as there will be less identification with these species and classes all player characters will in reality be ‘just’ spirit crows – one species, one class game. ;)

The Stream Team: See the Sunken Sewer in Dungeons and Dragons...

thatgamecompany’s multiplayer adventure Sky: Children of the Light is coming to...