It looks like things are literally shaking up in Fortnite. We are currently tracking a series of changes coming to the game leading up to what some people are calling a cataclysm for season 8. We have rumors of volcanic eruptions and even dragons, but before we go all Game-of-Thrones on Fortnite, let’s take a moment to see if science can predict what is actually happening based on the evidence we’ve seen in the game.

We are up to 19 cracks in the surface of the Fortnite map. Each one of these cracks in the ground has been preceded by an earthquake. As far as science is concerned, earthquakes can cause cracks in the ground, and believe it or not, the shape and size of the cracks that real earthquakes can form aren’t unlike the ones in Fortnite. However, most cracks, if they form, will happen pretty much all at once either during the primary quake or one of the aftershocks. But I believe I know how to determine the epicenter of the quake using science – just maybe not the science you think.

Obviously, the way to find out the epicenter of an earthquake is through seismology. That would be the first place to look. In fact, my hypothesis going into this article was that I could find the source of the earthquakes the same way that seismologists do. To do that, I need to know how to read a seismograph.

The image above is an example of a seismographic wave. There are two waves shown on the example. The primary (P) waves and the secondary (S) waves. (Seismologists aren’t the best at naming things.) P-waves travel faster and carry a lower amplitude than S-waves. As you can see on the waveform above, P-waves indicate that an earthquake is coming, but unfortunately, there are literally seconds between the start of the P-waves and when the S-waves hit. So it’s not a good way to predict earthquakes.

Just as we know the distance that sound travels over time (343 meters per second), we know how fast P-waves travel through the earth. Unlike waves moving through the air, waves traveling through the ground hit a larger variety of surfaces, so there isn’t one set speed of P-waves. But there is a chart that works off averages. Given the reading above, we can say that our seismograph was about 215 km away from the epicenter of the earthquake.

Unfortunately, there is zero way for us to triangulate in Fortnite. There is no seismograph, and based on what I’ve seen and heard, the same sound and shaking effect is used over the entire map. That means finding the epicenter is nearly impossible based on this science. However, there might be another way!

Humans like to see patterns. Biologists believe that it part of the reason we advanced as a species. We see and create patterns that allowed us to create tools and structures. Patterns helped us to hunt animals and domesticate crops. Patterns helped us discover math and see things that we can’t see with our naked eye. When our ancient relatives looked to the stars, they saw patterns in the sky full of chaos. We see a Big Dipper, an archer named Orion, even a lion. Our minds tend to create an illusory correlation when there isn’t actually a relationship at all.

The opposite tends to be true, as well. Humans tend to make patterns when they don’t intend to. That’s part of the reason that serial criminals can be tracked. Unfortunately, it’s not an exact science. In fact, many times, it’s not a science at all. If pushed too far, it turns into apophenia – that is, mistakenly seeing patterns and meaning between unrelated things.

Let’s try to avoid that when we study the maps of Fortnite by Redditor WhoWantsSomeHugs. He has put together a map of all the cracks in the Fortnite map. I have drawn lines over the general direction of all the cracks. And I’ll ask you: Do you see a pattern? There is one outlier, but all the others seem to point toward one apex. 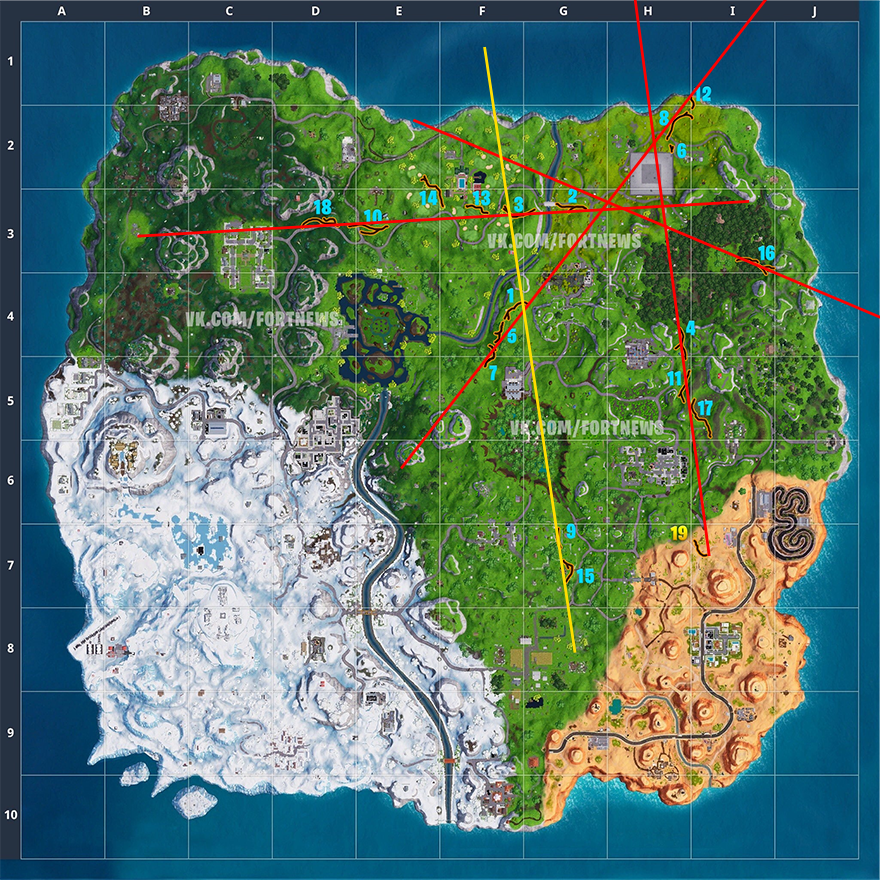 It looks like something is happening at the Block. We know that the bridge just to the west of the Block has fallen, so it’s my guess that’s it’s close to the epicenter. And ultimately, I believe that cracks 9 and 15 will shift their direction toward the Block, too.

So we’re left with two key questions: What is causing the earthquakes and are they natural? I can answer the second question. No, they are not natural because they are not following the natural pattern. If it were natural, all the cracks would form at the same time. If you want to see what natural earthquake cracks look like as they happen, here is some stunning YouTube video from Japan in 2011.

My analysis points to it being some sort of phenomenon happening at or near the Block, probably unnatural. If everything is cracking toward that direction, I would guess that it’s going to burst from the ground, but unfortunately, there is nothing indicating what is actually attempting to push itself out. It could be a volcano, but that’s not scientifically accurate — so let’s say a Kraken. Season 8 is supposed to be pirate themed, right?

As with all science, it’s not true unless it’s tried and tested over and over. So you tell me what you think of my prediction. What do you think is causing the shake-up in Fortnite? And always I’d like to know what you’d like me to explore next. Are there any tropes or events in your favorite games that need the scientific test? Hit me up in the comments below or on Twitter!

Have you ever wondered how the worlds of your favorite MMOs would work in the real world? Welcome to Reverse Engineering, in which MOP’s Larry Everett takes apart the tropes, equipment, and worlds from all kinds of massive online games, from dragons to jetpacks. Let him know what you’d like to see reverse engineered next!
Advertisement

But what if what we are witnessing isn’t simply a series of earthquakes, but the breaking up of a Supercontinent? One that is… decidedly… being sped up rather extremely. It’s hard to gauge time passing, especially as someone who has never even touched Fortnite’s Battle Royale (still waiting on the OG game to go free), but there is evidence of massive shifts geologically. Towns being submerged and frozen over, smaller landmasses shifting into view just off the coast of the game’s singular ‘island’.

Granted, as a ‘Supercontinent’ Fortnite’s singular landmass is woefully lacking in continence, but between the internet drops I’m dealing with at the moment I can’t really find much to say that there is any other notable bits of land in the game. It’s possible that the planet Fortnite occurs on is a smaller yet denser planet, as theories elsewhere have mentioned it’s entirely possible the game occurs outside of Earth. Or it is a nearly identical planet as Earth, just mostly covered in ocean and whatever those storms are.

But without any clear simultaneous cracking as mentioned, this isn’t a typical Earthquake. Even volcanic activity would register similarly so I can’t quite see that either… But what if the landmass is beginning to break apart? I’d argue such a thing would likely seem quite similar to an earthquake, especially when you can see the land shifting during said quakes like in the video. Plus…! if the island were to separate into individual islands and areas, the pirate theme could fit rather well too. And hey… maybe Epic decides that dropping in is a little dull, and instead has you shooting along the sea or up out of the water towards the landmasses?

It would be a nice change from what literally just about every other Battle Royale does. And hey, a pirate skimming along the water? Sounds nifty to me! We could see an implementation of new ways to travel similar to the portals and bouncy lakes and etc.. And rather than choosing when to jump out of a flying bus, you choose which side or spot of the map to come in from. And if the island is separating in an exaggerated fashion, then sometime in the seasons afterwards could see the lands crashing back into one another, as well as fundamentally change up the layout of the map.

And sure, some monstrous kraken could be the one behind it I guess. Unlike dragons, biology and fire, Fortnite and Geology is certainly outside of my wheelhouse! Pirates though? I can dig them, yarr.