As promised, this round of play in Legends of Aria featured greater focus on my combined magic and steel, though I definitely was leaning more into the martial side of things this time around. Overall I feel as if the skill barrier has all but crumbled away for me in terms of mitigating combat, with the only thing to fear now being fear itself.

I think that’s what’s been the biggest hindrance in my progress — indeed, my enjoyment — in Legends of Aria: fear. Fear of having to suffer the ignominy and stress of looting my corpse. Fear of pushing the envelope. Fear of trying out something different because my very precious little avatar is as soft as a flan on a humid summer evening.

There’s a funny thing about fear, though: Sometimes it melts away in the face of aggravation, until you face the impending consequences and just accept it. Like a skateboarder falling off of a halpipe or a boxer about to get hit by a punch, you just embrace it all and absorb it. That’s the point I hit this run. 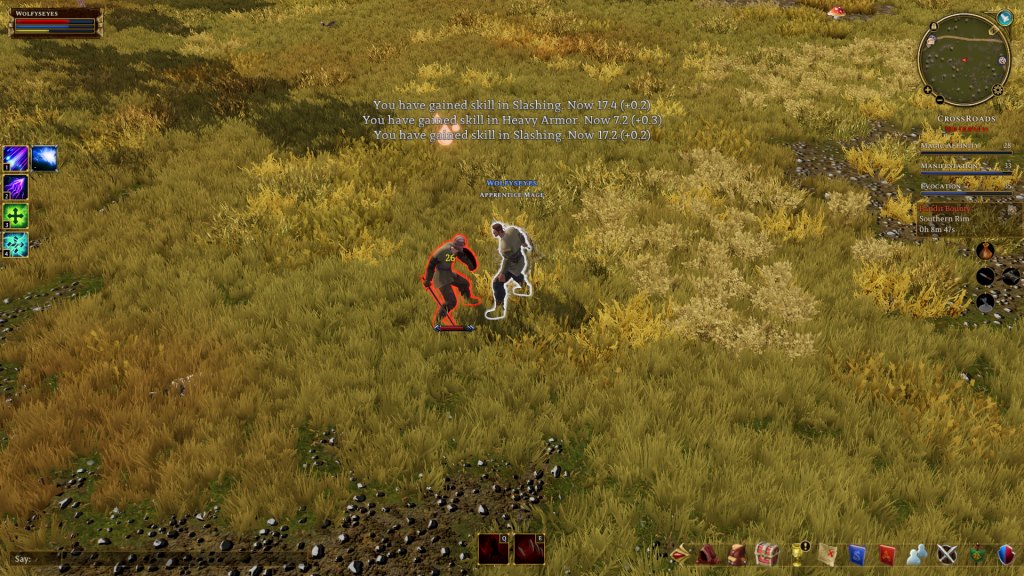 This whole feeling was spurred on by… I’m loathe to call it a ragequit so much as a grumpy logout. After darting about and slapping at the local wildlife, I decided to take another swing at a bandit. This time around, I managed to pull just the one instead of drawing down the entire squad. Still, even with a better understanding of what my abilities did (“Oh, so Overpower provides a static boost to your damage. That’s better than I first thought!”), I was just getting curbstomped. So I walked away from the frustration and decided to come back at things with a fresh eye.

That fresh eye opened up to that fear melting in to acceptance. I was tired of just poking any little critter within the confines of Pyros Landing. It was time to venture out and to the north. Whenever I’m feeling stymied by the grind of a game, I tend to rely on a bit of exploration to perk me up.

That’s not to say I wasn’t continuing to skill up my flan fighter. I did stop to beat on the wolves and the rats. But the change of venue was definitely needed, even if I knew that I was effectively trading one forest for another. Before I left, I had to take another couple of cheap shots at the underwear trolls. Naturally. 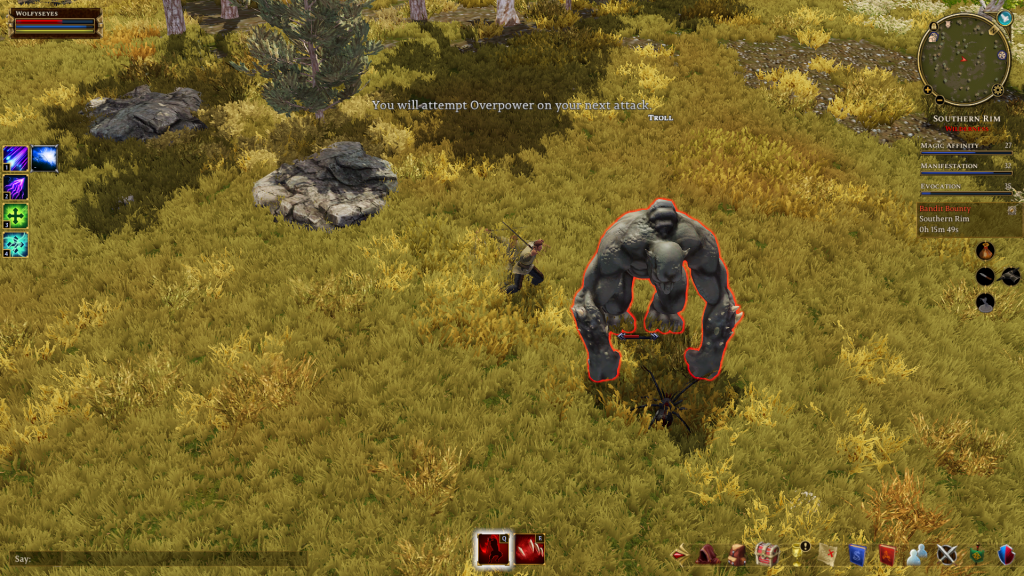 Pressing on to new lands was extremely liberating, both in a literal sense for my avatar and for my mental state. Aggravation at staying in my lane and staying purely safe gave way to…not delight, I guess, so much as a sense of relief. Things maybe would be different here, even if just a little bit. Maybe this would embolden me. My reward was already not being set upon by bandits as well as seeing a variety of rather pretty player houses and shops along the way.

Turns out I was about half right. As much as I was pleased with walking all the way to a new town, I was still playing it coy. I saw a new type of bear and immediately ran away from it. There were extremely big rats. Oh no a spider.

I could blame this perpetual state of concern on Legends of Aria’s glacial skill advancement system, or the fact that missions in the game are the laziest version of the “kill 10 rats” quest model, but really I felt like the one to blame. Indecision on where to go and a slightly loose grasp on what sort of creatures could be defeated froze me back to my old habits of picking soft targets and watching alerts of my Slashing skill inch upward. I even went full circle and headed in to the Upper Plains sewers because that’s where the noobs go. 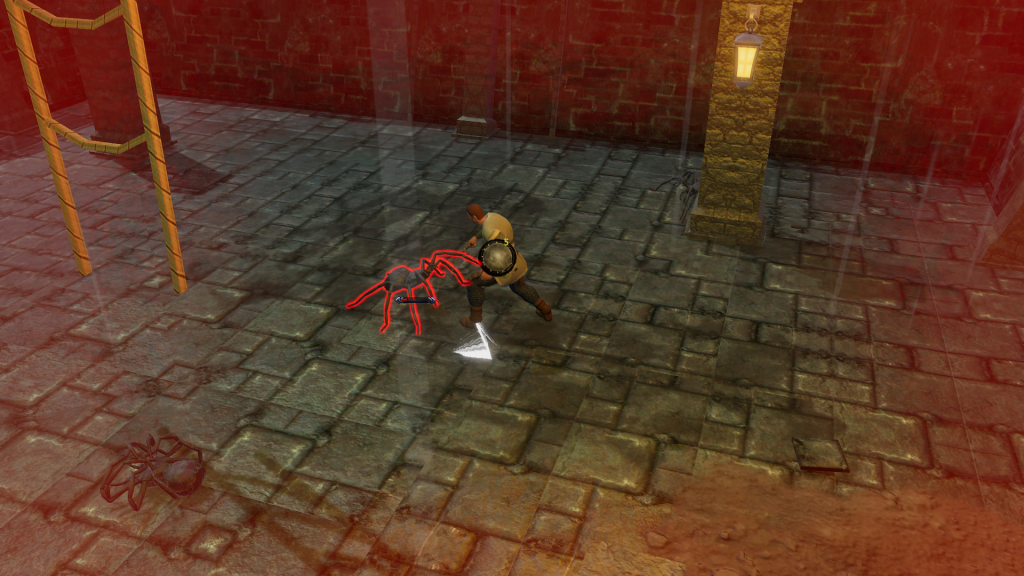 All of this hyper-worrying turned in to a sort of self-loathing. A began to get caught in a spiral of self-blame. Clearly, the game wasn’t wrong; I was doing something wrong. I’m not using the right equipment or I’m not fighting the right monsters or I’m not in the right area.

I found myself getting needlessly snippy at aspects of the game as I played. Why the heck does it zoom out when I move just a few feet? Jeez, I bet the sky has a pretty sunset but I can’t see it because of the stupid camera angle. Why in the hell is this launcher patching and checking hashes; I’ve bloody well installed the game just stop it already.

After some introspection I feel that I definitely should shoulder most of the blame for my woes here. Clearly I’ve missed the point or I’m just not getting it. Maybe in time I will, but right now it all just eludes me. So I resigned myself to wandering the woods of the Upper Plains. I sighed, keeping my weapons firmly attached to my hip as I tromped about the zone. At least I had really pretty houses and shops to see. Seriously, there are a lot of players who just set up impressive stores and call it a day it seems. 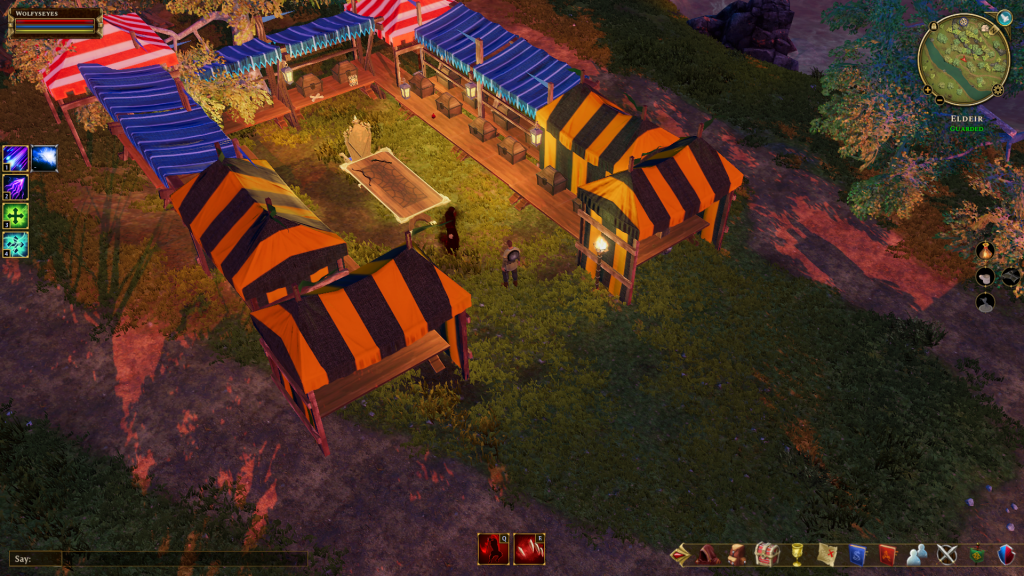 I’ve got one more week of stuff to write about in Legends of Aria, and that leads me to the final chafing dishes I’m yet to visit in this sandbox’s buffet: crafting. I strongly suspect that this is another thing that probably won’t break my mental state regarding this game, but at the same time I’d be loathe to leave it behind. Besides, there really are only so many ways I can write about wandering the wilds and bopping creatures with weapons.

So, it’s mule time. The question is what sort of craft I should take up. Even though it might be obvious, I don’t expect to be able to go extremely deep here, but I would like to at least give it a try. What shall it be, friends?

What craft should I take up in Legends of Aria?

As usual, polling will end at 1:00 p.m. EDT this coming Friday, March 22nd. I hope you’ll forgive me for a somewhat downer post this week, but this is how I feel. Here’s hoping that crafting will be one last chance to glean some enjoyment out of my time in Legends of Aria. I could use the mental coffee.

Don’t do cooking; it doesn’t exist. And alchemy will suck.

LOA still needs a lot of work. It is still early access.

They almost have as much in the way of systems in place as UO did at launch, but they are not as polished. (Way better graphic capabilities than UO though, including turning the screen 360 and zooming in and out.)

Everything from crafting to magic and even melee combat needs another pass, some more than others. Right now with things like 3 heavy armor pieces (head, body, legs) of 3 varieties (chain, scale, plate) is just not enough variety for meaningful crafting or complexity for 2019.

Their focus is on finishing the map and launching their northern continent, which is great, but the core game needs much more than it has right now.

It is kind of telling that the UO emulating fan made server Legends of Ultima has much more to offer as far as monsters and equipment and crafting goes.

The game is rather shallow right now and I feel the steam launch is going to go badly for them because of it. Not everyone has fond memories of UO like I do.

I’m hoping a little more time in the game development oven will lead to a better experience.

I am not sure but UO has been the only game I overlooked once my self-imposed rule of not playing private servers of Non Sunsetted mmos and the results were bad. All, one by one were gankboxes where the vets seeked out newbies in newbie dungeons and low level areas. The highest profile gankbox server is UO Forever where all newbie gankers unite. The devs supposedly were taking measures for ganking, but rescinding part of them as soon as gankers complained.

I find it a bit puzzling that games like LOA and Private Servers try to emulate the least successful era of UO when the game was an exploitable gankland. Ganking and PVP is different of course. I enjoyed various types of guild-warfare on many games.

That said LOA has a way to go, as long as it can survive financially I think it will be improving on all aspect but right now playing the official UO on one of the more alive server is more fun

Need some of the mental enhancement associated with F&L? Maybe then the game will seem good to you when played. :)

This sounds like a dreadful ‘game’, unfortunately. Thanks for looking at it; shows that for me, is a definite ‘pass’.

The Stream Team: The Legend of Two-Toed Tobias in Dungeons &...