Blizzard’s Hearthstone Hong Kong fiasco was very much on our minds this morning as the Massively OP team prepared for BlizzCon, and we were taking bets as to whether or not the studio would even address it publicly, never mind say sorry to fans. Some of us didn’t even believe Blizzard President J. Allen Brack would show up live onstage at all.

But surprising almost everyone, Brack apologized for the studio’s mishandling of the situation during his keynote address. He actually said the word “sorry,” contrary to his statement a few weeks ago.

“Before the opening ceremony, I want to say a few words. Blizzard had the opportunity to bring the world together in a tough Hearthstone e-sports moment about a month ago, and we did not. We moved too quickly in our decision making, and then, to make matters worse, we were too slow to talk with all of you. When I think about what I’m most unhappy about, there’s really two things. The first one is we didn’t live up to the high standards that we really set for ourselves, and the second is we failed in our purpose. And for that, I am sorry, and I accept accountability.

“So what exactly is our purpose? BlizzCon is demonstrating it even as we speak. We aspire to bring the world together in epic entertainment, and I truly believe in the positive power of video games. When we get it right, we create a common ground where the community comes together to compete, connect, and play, irrespective of the things that divide us. As an example, BlizzCon has people from 59 countries all around the world here at the show today – that is amazing. And that is the positive power of video games to transcend divisions that surround us in so many of our places today.

“We will do better going forward, but our actions are going to matter more than any of these words. As you walk around this weekend, I hope it’s clear how committed we are to everyone’s right to express themselves in all kinds of ways, all kinds of places. I’ve actually seen and heard many of you expressing yourself this morning. [Eds: Seemingly a joking reference to the protests from today, as well as attendees in pro-Hong Kong gear and Pooh costumes.] You use your vacation and your family time to be here in Anaheim with us, and we are so grateful that you’re here this weekend. Our best moments are here in our shared passion to Blizzard games. So once again, BlizzCon has brought us together and today you’re going to see a lot of the hard work of the Blizzard team.”

Worth noting is that not everyone is feeling all that appeased by the apology, which could be interpreted to be apologizing for the wrong thing, especially since he mentioned neither Hong Kong nor China. 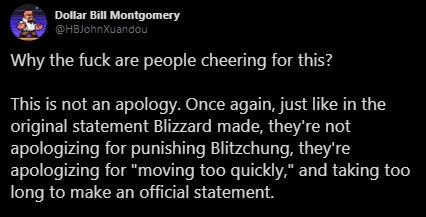 Other bloggers have pointed out that while Blizzard’s apology may have been oblique, its allowing of political protests at BlizzCon itself seems to signal that it recognizes its Hearthstone tournament decision was wrong.

“This is exactly what they punished Blitzchung for, so their ACTION here is a complete reversal of that original decision,” blogger Syncaine wrote. He’d previously been boycotting the company over the incident. “Short of outright telling China to go F itself, I don’t know what more they could have done to show they are correcting the mistake. That someone is being allowed to walk in as Winnie the Pooh is, in fact, that direct F You to China.” He also argues that folks who said the protests and boycotts wouldn’t work have been proven wrong. “Some part of Brack saying sorry was due to a financial hit related to this incident, whether direct via cancelled subs or indirect in bad PR. Here the protesters and players won, and China lost. That’s a good thing, that goes far beyond just silly videogames.”

A take from RPS adds another angle to think about. “Blizzard’s explanation makes little sense. They claimed [the punishment of Blitzchung] was just because he interrupted the tournament with an off-topic demonstration, not because he voiced support Hong Kong’s protests and Blizzard feared reprisals from China. ‘The specific views expressed by Blitzchung were NOT a factor in the decision we made,’ Brack said in October. It seems unlikely that a one-year ban and forfeiture would be a fitting punishment, then. Especially given how common other off-topic chat is. Even the reduced punishment still seems harsh.” In that context, it’s not clear why “everyone’s right to express themselves” is now being invoked by Blizzard, nor why Blitzchung, the casters, and the American University team haven’t been fully and retroactively reinstated.

You can hear the full apology in the video below and decide for yourself whether it influences your opinion.