Remember that Futurama episode where Fry, Kip, and Zaf Branbigan got stranded on a planet full of amazons and were sentenced to death by crushed pelvises? I wouldn’t be surprised if someone from Pearl Abyss saw that episode one night and sat up and said, “We need that in Black Desert.” The new Guardian class – in pre-creation now and launching next week – wields a massive axe and shield that makes short work of any beast. And it won’t be just be from a crushed pelvis.

END_OF_DOCUMENT_TOKEN_TO_BE_REPLACED
Even though Black Desert has gender-locked classes, classes often have a counterpart in the opposite gender. Some are more direct counterparts, like the Ninja and Kunoichi. Others focus on a different attack pattern; the Musa’s awakening attacks feature AoE melee, while the Maewha’s spear attacks are more of a column pattern. The Guardian, at least at first glance, looks to be the analogue to the Berserker, but there’s more to it than that. She plays more like a Warrior or Valkyrie while featuring the heavy-hitting attacks of an axe. But let’s be truthful here: From her gameplay, it’s clear she is the weapon and the axe is just there for the ride. 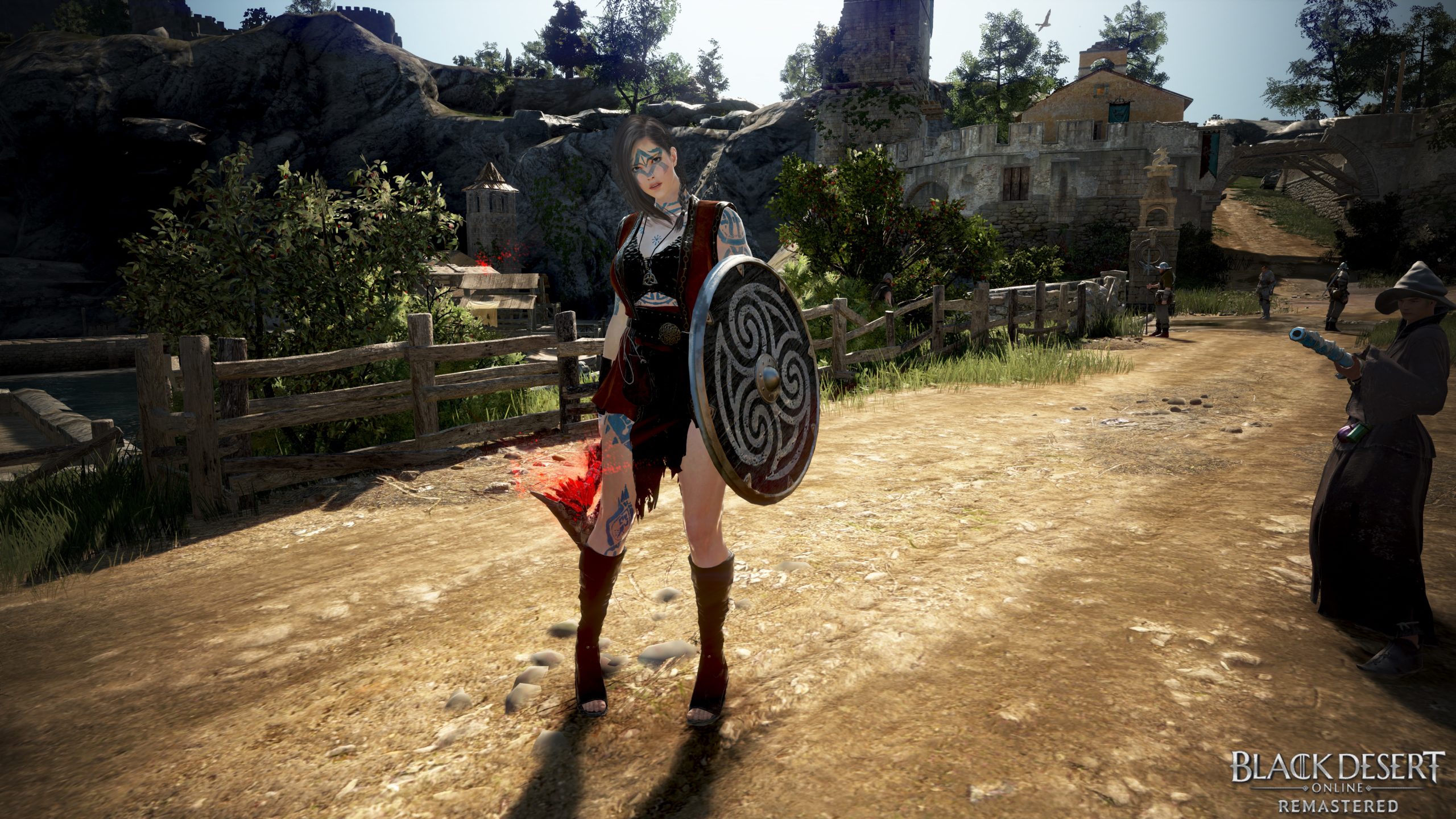 I rolled a fresh Guardian on the global test server to check her out in person, and I have to say, the attack animations are beautifully done. Every hit looks and feels heavy. With every mighty cleave, the earth sunders from each strike. She’s a real bruiser, very tanky and very difficult to kill, and not just from gear. She’s got an impressive toolkit to boot, with a stacking buff, just for a start. I’m not sure what it does yet, as the skill description was still in Korean, but it felt like a damage buff. It had a dragon symbol, and that’s a pretty universal symbol for power.

Her sustain is even more insane. She has this amazing skill where she uses stamina as a resource to heal herself. When she finishes healing up, she slams her axe ferociously, damaging anything immediately around her. Speaking of resources, I didn’t find any issues with resource management, either. Every hit she connected seemed to generate more than 50% of her class resource, so she’ll have no trouble flinging out her attack skills with abandon.

I even went through the trouble of enchanting her weaponry, a Kutum shield and Blackstar Axe to PEN (+20), but for her accessories and armors, I kept them at TET (+19). Even with unlimited resources, the process of getting all that gear to PEN is exhausting. Altogether, she had 290 AP and 300DP, strong enough to tackle some of the most powerful mobs in the game. 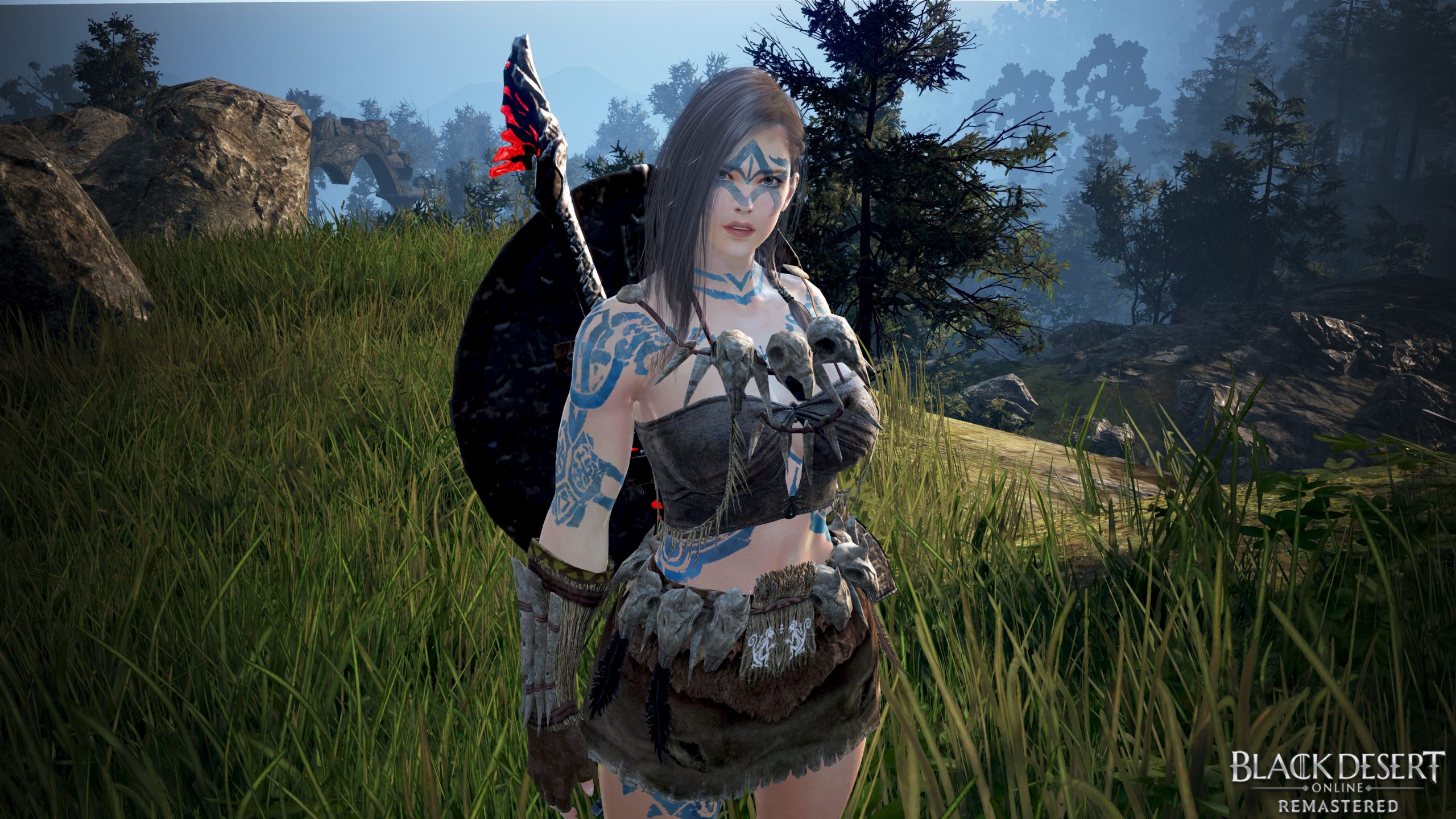 My Guardian and I traveled to far off Kamasylvia to tackle manshaums, the mirumok trees, the ghosts of Ash Forest, and some relatively easy-to-kill mushrooms. For those unfamiliar with Black Desert’s grind spots and locations, just know that Kamasylvia is the western part of the game’s unnamed continent. It’s a lush, magical forest filled with mystical spirits, ferocious griffons, and literal tooth fairies. I’m not joking, by the way; they’re literally fairies that identify themselves as tooth fairies. And they live in a section of the Kamasylvian aptly named the tooth fairy forest. Take them at their word on this one. Ironically, it’s actually a pretty decent fishing spot!

But I digress. In 2020, Kamasylvia is a great alternative place to level up your characters if you’re like a certain sith lord and not a big fan of irritating deserts. The mushrooms of polly forest are a great source of income, and they’re an easy fight.

Naturally, with her gear, my Guardian sliced through those mushrooms like a Cutco Knife through… mushrooms. I then took her through maunshaum forest. It’s named after the mobs that live there, manshaums. With a 240 AP requirement, it’s a great step up from the mushrooms. She had little trouble, but the mob did hit harder, so the self sustain kept her going through the tough fights. 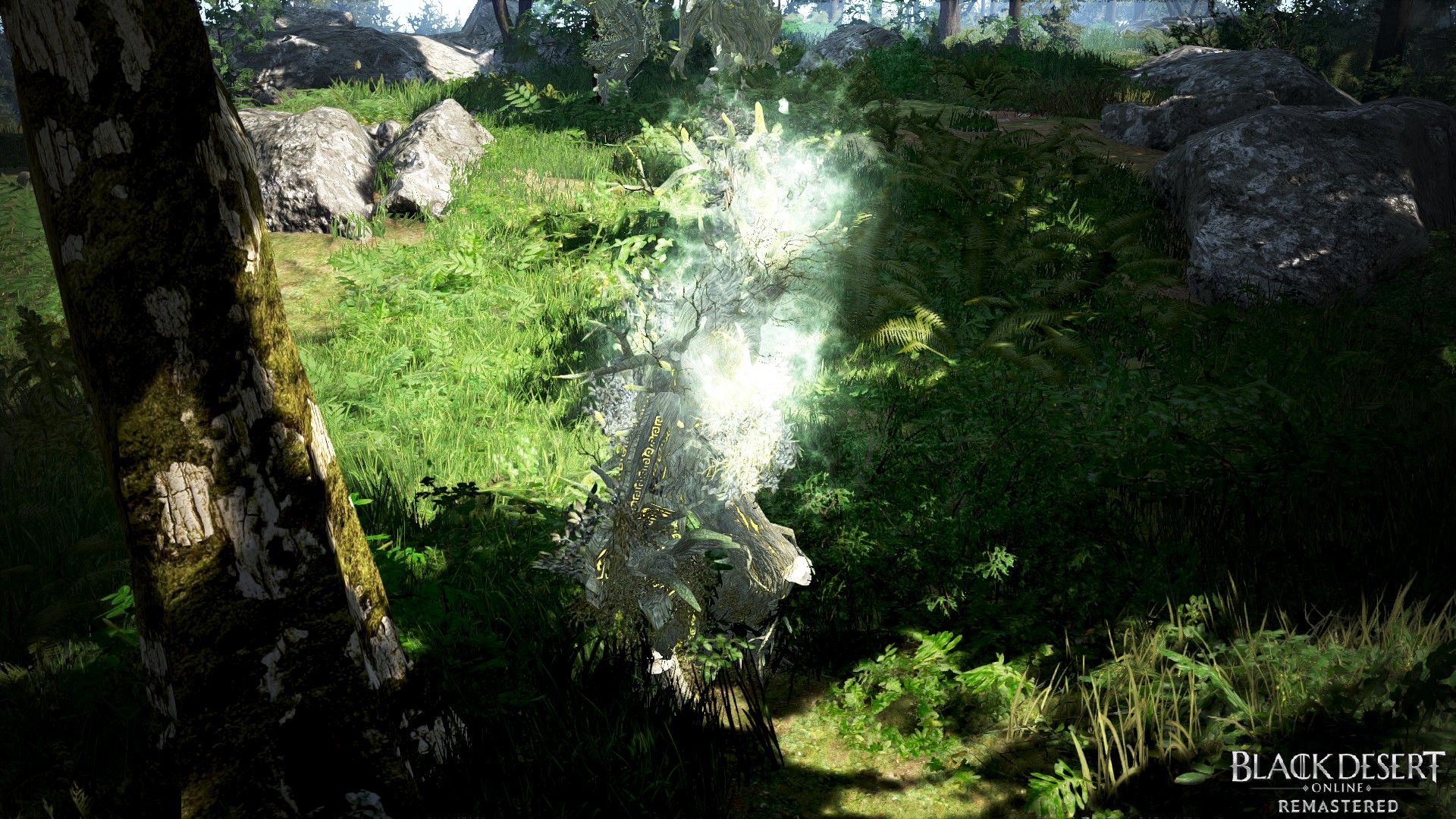 Things got more interesting around mirumok. The mirumok ruin is filled with very large and very angry trees. It’s a popular spot because of the experience and loot the beasts drop. They’re very tough, and it’s recommended to bring a party to do some farming. Of course, we’re talking about the Guardian here. And she’s bringing an axe to a tree fight!

Even with my character’s impressive gear, I was getting knocked around quite a bit. But that self sustain is just so good, it’s literally unlimited healing. It was at this point that it was pretty clear she was taking much longer to down the mobs, which is expected. High-end grind spots take a while to kill mobs, and even without an awakening weapon she was a total monster down there.

And then I went to the Ash Forest. This area isn’t in the NA version of the game yet, but the Ash Forest is a high-level 300+ AP area. It’s a very spooky forest with a strong Dark Souls vibe. (The node is a bonfire!) The mobs are very powerful ghosts. And boy do they hit hard. I was barely able to handle more than a handful at a time, and if one of the bigger ghosts with purple names join in, fugedaboutit. They made short work of me, and I wasn’t there long. If I’m to succeed down there, it’ll probably be best to take some time to tune her gear and min-max before I go back there and give them another shot. 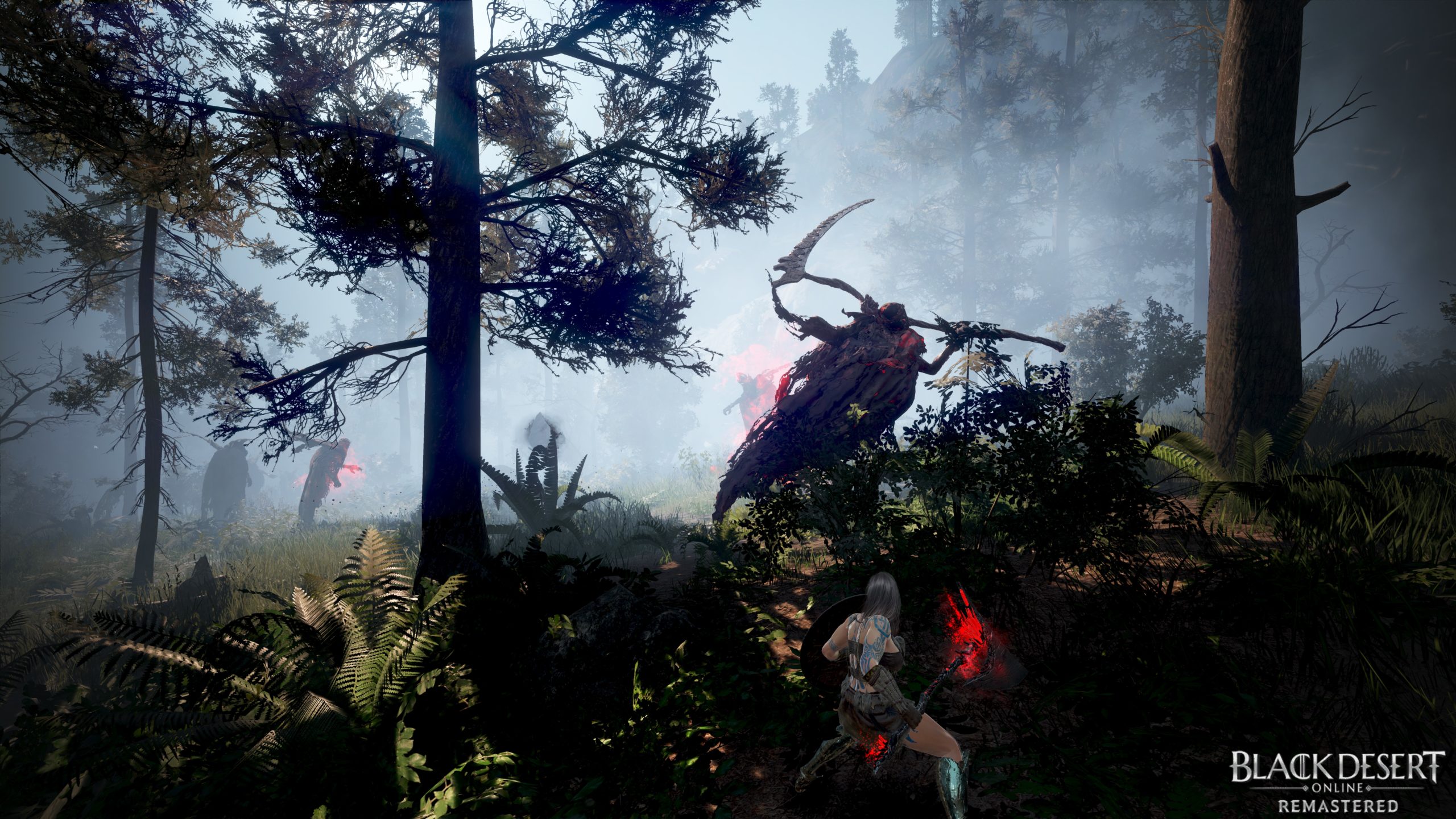 Overall, I really enjoyed the Guardian. The vibe I’m getting from both Reddit and the game’s chat is that folks are pretty excited with her, if only for the aesthetic. But beyond the aesthetic, she’ll be a solid class to main. If you like big hits that literally blows up the ground with every strike, this new class is right up your alley.

Here is my Guardian from the test server.

I’m happy to see her as a counterpart to the Berserker, even if she isn’t quite advertised that way. Yes, I know Giants are an anomaly in the lore, which was something I could never really wrap my head around. Now my headcanon makes sense with the introduction of the Guardian. I’m taking a wild stab in the dark and hoping for male Dwarves to balance out the Shai. Or seeing Demibeasts as the next playable NPC race, but as both male and female. (Gender-locking and weird stretches in lore suck.)

As far as Guardian goes, I’m happy to see diversity with the female classes, but due to the amount of work that goes into creating, gearing and playing characters, this one doesn’t offer anything new to the ones I enjoy. I have Lahn for exploring and up-close combat, Witch for boss fights and Shai for trade skills. That’s plenty!

It had a dragon symbol, and that’s a pretty universal symbol for power.

Unlike all other female classes – it’s impossible to create non-(nearly)maxed height guardian without making her look ridiculously deformed. Next week will be fun with all the strange characters running around.

Really? Looks perfectly normal to me. Min height and size.

I didn’t agree with 3dom but after looking at that it does look pretty weird.

Looks normal to me. I can’t even see how it’s debatable.

Assuming this isn’t some dog whistle for “not sexy enough”, maybe they move a bit ‘janky’ is what throwing others off or something. >.<

I think the feet and calves are a shade too small. Just enough to throw off the body proportions and make her look like she is en pointe.

Otherwise she gives me the Eir Stegalkin vibe and that’s a good thing.

Yeah I agree – maybe it’s the perspective, the boots, or the stance. Or all three. But from the knees down, she looks disproportionate to the rest of her body.

I will end up trying her like I try all the classes and get her to awakened state and stop because I didn’t invest all that time and money(inventory, weight, cosmetics)for nothing into my main to start playing a new class. It’s really too bad weight/inventory slots aren’t universal so we could switch if we wanted to.

They’ve fixed so much and I appreciate that, but I’ll just never swap off my DK at this point because it’s not worth the investment. Progression is basically null after level 59 and as a PvE player, what’s the point? Oh well. Crimson Desert is coming soon enough.

Yea, one of the things that keeps me from getting into BDO. Unless you want to be constantly hindered by tiny inventory, you’ve got to pony up early and often for space. I’m just done with that scam.