END_OF_DOCUMENT_TOKEN_TO_BE_REPLACED
So here’s one nobody quite got right in the 2020 predictions: Torchlight Frontiers is changing its name to Torchlight III, with a summer launch planned. Notably for MMO fans – and yes, Torchlight Frontiers lingered in alpha all last year as an MMOARPG, happily accepting MMO awards – PWE and Echtra Games are heavily downplaying the MMO elements of the game, saying it’s “[returning] to its roots” for “ARPG fans,” and that means a buy-to-play “premium” model with “a new focus on linear progression” and (most of) the online multiplayer stripped away. Here’s Max Schaefer on the big switcharoo.

“When we started developing Torchlight Frontiers, we were focused on creating a shared-world experience. […] During development, you often discover what type of product a game was meant to be and we found Torchlight Frontiers was meant to be a true successor to Torchlight I & II. Based on this and extensive feedback from our Alpha testers, we decided it was time to take the game back to its roots and model it after the classic Torchlight games that ARPG fans have come to love. We’d like to thank our dedicated player base for supporting us and providing such insightful feedback during early development.”

Closed alpha testing apparently begins on January 29th. Existing testers who’ve been playing the open alpha for the last age will be granted Steam keys to continue testing there.

“We’re also taking this opportunity to adjust our approach to Alpha testing. We will be wiping character progress with the release of Update 10 and the move to Steam. At least one more wipe will be coming prior to launch so that all players will start the retail release with a fresh account. This will allow us to streamline our development development and testing methodologies. We’ll be able to release updates on a tighter schedule and our players will be able to more easily jump around the content providing us with greater feedback and deeper testing capabilities. Don’t fear, if you’ve been with us on this journey, any Alpha-exclusive collectibles you earned are being tracked and will be made available to your retail account.”

According to the dev blog, the game will no longer offer horizontal progression and scaling, and most zones are still private. There is still an element of multiplayer, but it’s much more like the earlier two titles. The main upside? No more in-game real-money cash shop.

“Most zones are now private by default to give a better play experience. Players can still meet each other in public town levels and form parties to play together in instanced combat zones. When creating your character, you can now select Online or Offline Mode. Characters made in Offline Mode do not require an internet connection to play, but will also not be able to participate in multiplayer games.”

This marks the second MMO under the Perfect World banner to shed its MMO trappings in favor of ARPG stylings in recent weeks, the first being Magic Legends.

Click to show more from the press release.
When Torchlight III releases on Steam this summer, players will be able to purchase the full game and play however they like (online or off) with access to all playable content. Rather than focusing on horizontal progression, the game shifts back to the familiar linear world structure that was introduced with Torchlight I & II. Longtime Torchlight fans will be happy to hear that the game features the same mechanics that set the original series apart from other ARPGs on the market. After selecting from Torchlight III’s unique character classes, players will choose a pet to accompany them on their new adventure: a fluffy alpaca, a swift owl or a loyal canine retriever. From there, they will explore forests filled with dangerous creatures and participate in thematic quests to earn powerful rewards. A full list of game features includes: 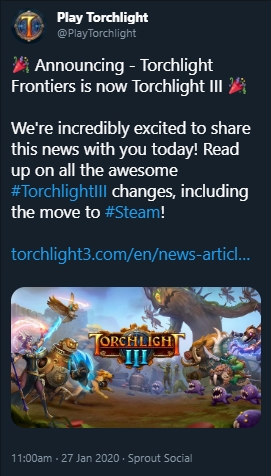