Last week, amid announcing 500,000 sales of Temtem, Crema teased that it’d be dropping a full roadmap for the game’s development through early access. Now that roadmap has arrived, and there’s quite a bit on it, including an elaborate competitive matchmaking scheme with an ELO player rating system, improved rewards, auto-scaling of the critters, achievements, and a spectator mode. MMO-oriented players, however, might be more interested in the overhaul to the chat system with chat bubbles (to make it more like an MMO’s), club management (to make guilds work more like MMO guilds), and… housing. Yep.

“Every Temtem player will be able to acquire a house since they won’t be limited in quantity. We’re designing the Atoll Row (the physical location where all houses will be built) to be infinite so you don’t need to worry about buying permits or land. Technology in the Archipelago is amazing! There’s one thing you’ll need to worry about though, decorating your house! You will be able to decorate your house using furniture bought and earned in-game, and every furniture store in the Archipelago will open their doors and will showcase different furniture in each island (in a similar way as the boutiques with the clothing options). You will also be able to invite other players over so you can gather around your dining table or join other player’s houses and check how they’re decorating them. While houses will keep a predominant decorative functionality, we have some ideas to include useful furniture too in the future (think of things like an incubator, a jukebox, a fruit tree…).”

A “mid-term” roadmap is planned for reveal tomorrowday, but even the short-term roadmap, from spring to fall of this year, is incredibly ambitious. 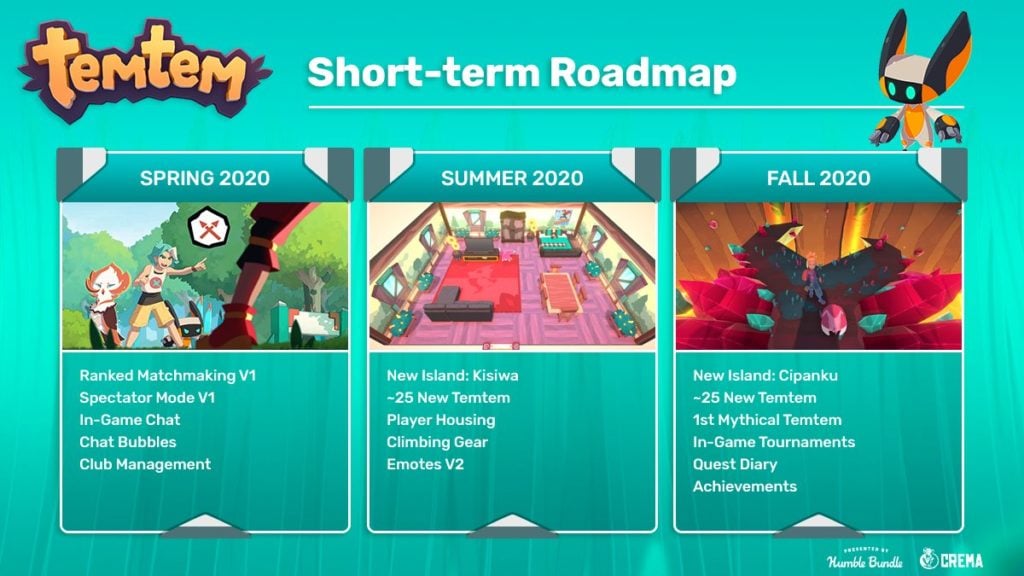 Glad they put up a roadmap, the radio silence on Steam was rather awkward.

And this is how an ongoing game can get better with time. I’m glad they’re moving to make the game more unique to offer something beyond what’s on offer for the typical creature collecting game. Housing definitely stands out!