In January, we floated a poll at you all about what you’d want to see in your next Star Wars game, and it was all because of Project Luminous, which was rumored to be a new project to overhaul the Star Wars IP a la the Marvel IP, with a multi-platform Jedi-centric narrative arc set a few hundred years before the movie timeline. It was supposed to include more than just movies; the first entry was supposed to be a video game, and though we didn’t know whether it’d be an MMO, we speculated that we couldn’t imagine Disney not going for the overly monetized always-online route in some form or another.

Well, last night Disney took the wraps off the project, which looks to be a series of stories set in the High Republic, 200 years before Phantom Menace, with the Jedi at the heart of a conflict with the Max Max-esque Nihil baddies.

You might have noticed that not only did I not use the word “MMO,” I also didn’t use the words “video game.” That’s because Disney didn’t announce one. In fact, Disney didn’t really announce anything but comics and books, which doesn’t entirely jibe with original reports that it’d be a “multi-platform” venture. While rumors persist, some of them conflict; even Polygon points out that there’s confusion over whether movies will ever be set in this time period. Guess we’ll keep watching.

Spied in the writer’s room. My heart. 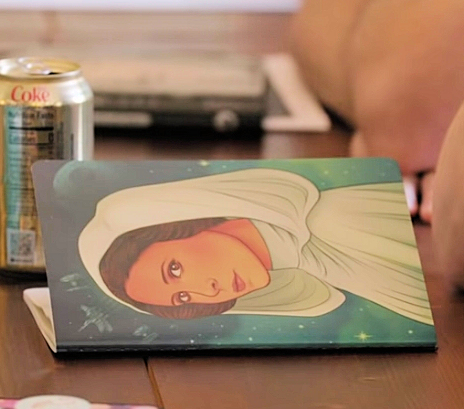 Here’s a funny thought. The only thing that seems to be the real Star Wars is the Old Republic MMO.

Makes me kind of sad to see the instant negativity around the announcement.

The biggest media company in the world just announced it’s putting long term planning and resources into one of our favorite IPs, and they’re doing it with at least a show of all the socially conscious wokeness we’ve said we want. The biggest weakness of this announcement would seem to be its self-consciously trying to not piss people off.

I get why creators start to shut out feedback from their audiences. We’ve gone from a place of being fans eager for new content to everyone being an instant critic.

What is pissing people off is they are throwing away all the previous lore that was written for their own. And Kennedy’s the force is female BS didn’t help either. Her going out there saying Star Wars doesn’t need men was also a bad move.

Sure, but Disney had established years ago that the Legends stuff wasn’t canon, it’s not like this is a new decision.

Kennedy’s statements are of the moment, and frankly an illustration of the biggest problem of current wave feminism where “it’s all about equality” is transformed into any misandrist sentiment the speaker wants to make and then justified with “it can’t be sexist because patriarchy”. It’s a rallying cry for people walking around with a perpetual low-grade pissed off who need an outlet for it, hopefully over time it disappears. For right now, she’s playing to the crowd the way everyone does, hard to take it too seriously.

I have a bad feeling about this.

First, I had to get over Star Trek now it’s Star Wars. The two SIFI IP’s I grew up with and watched get ruined. At least I still have the old real Trek on Netflix.

Ever since Disney bought SW they have been killing existing stuff only to realise they didn’t know what they were doing and bringing back the thing they killed under a new name.

The problem with current SW is that Lucas had much better inspiration than current SW, instead of hiring the guys that made the GOT tvshow they should have hired the guy who actually invented that world, or one of the many talented writers who probably already have their take on SW ready to go.

Criticizing is easier than creating, people may hate Lucas or Filoni, but those guys were doing stuff they believed in, not just making the stuff google stats says everyone wants to see.

Its Disney… any way it can be marketed, it WILL be marketed, games are without a shadow of a doubt going to be coming :)

I’m over it. I saw the “Skywalker Saga” to its completion as uneven as that experience was because my brain is broken. Their Marvel/Avengers stuff has been stale for ~8 years and now they want to make jedi Avengers set in The Old Republic but they already used that idea for making a new canon so they have to make The Less Old Republic.

They hired a bunch of diverse new talent to build this setting from scratch and hope to make The High Republic feel like a fresh take on the IP. When these diverse creators split off to make their individual/small team contributions to the greater High Republic canon via comics, novels, and indie-budgeted games Disney will be prepping the brand for its true purpose which is to be a multi-billion dollar omni-media franchise run by a committee of a few millionaire/billionaire white dudes and their legion of focus testing groups.

I’ll say it again, this was touched upon during celebration chicago a bit and it was aimed as a reading program.

I do have to say that I hope it spills over into other forms of media! Sounds like the closest thing we’ll get to a canonized old republic content.

Oh boy, more space magic and knights! Seriously, space magic is almost always boring because they never actually seem to do anything interesting with it, and where the Sith/Jedi conflict could be interesting and incredibly nuanced it almost always seems to revert to “JEDI GOOD, SITH BAD” in the major installments.

Give us more non-force users. They’re consistently far more interesting IMO. I’ll take a Shadow of the Empire or Mandalorian over nebulous and poorly defined space magic with terrible attempts at moral lessons any day of the week.

If you tabletop RPG…Edge of the Empire is amazing for this kind of setting.

I know of at least 2 groups who have started up since The Mandalorian came out. The Prison Break episode is pure, 100% Edge of the Empire gold!

I read that as Edgelord Empire somehow. >.<

But that doesn’t sell plastic lightsabers to 45 year old neckbeards!

I have always liked the non-force users in Star Wars better.

How anyone, even the “BUT ITS STAR WARS!” true brand diehards can be excited for more star wars fiction in the disney universe after this astounds me:

-yes this is real, known as the infamous “scat wedding novel” online. Star Wars was a mistake.

…the fuck did I just read? This had better be some fanfic and not an actually licensed book…

Just looked it up and it’s from a kids book? I mean…at least it’s slightly less cringy given that all these characters are also supposed to be kids but like…damn man. Multiple pages about farts.

Don’t get me wrong, I’m never too classy to laugh at a good fart joke, but damn man. When do we get the Mickey Mouse cartoon where he shits his pants for a laugh?

It seems like one of those things like the power puff girls reboot where down the line its going to turn out there was a pervert inserting his fetishes and himself as an OC into the universe canon because you can get away with it in kids media.

Case in point the entirety of Totally Spies and that dude behind the old fox marvel shows who had a fetish, such as it is, for women being petrified and turned to stone and it showed up in every show.

I think theres a good reason a lot of kids shows dont get behind the scenes making of features now that i think about it.

You thought the disney movies were bad? the rest of the ‘nu-eu’ is so much worse. People would beg for the yuzzon vong to come back at this point.

[JOHN WILLIAMS LUKES THEME PLAYS OVER TWIN SUNS SETTING, BUT ITS A GUY PLAYING A KAZOO WITH HIS BUTT]

Wow….. words are hard after reading that. I mean I am laughing sure, but that’s because I can’t believe they actually published that. Disney just needs to give the IP to Timothy Zhan and call it a day.