Let’s be real: Some of the panel titles at GDC Summer 2020 are unintentionally misleading. For example, the “Evolution of Gacha Systems in Mobile Free to Play Games” panel by indie game designer and psychology-specced Dr. Jakub Remiar talked less about the history of gacha systems and more about the various models of gachapon rewards. In fact, Remiar’s word was “tokens,” which given the context can be super confusing. There’s a lot to unpack here with this panel, but I think I can drill the presentation down so we can talk about how various gachapon models work to get players to spend money – and how they operate in creating or outfitting avatars we use in these games.

Now, to be clear, when we talk about “gacha rewards,” we’re talking about characters and cards you use from games where you don’t simply pick your character and build it up; they are often acquired or purchased through lottery-esque or random systems instead. There may also be accessories, like mounts or armor sets, but you’ll see Dr. Remiar’s models help explain these as well. For the sake of conversation, I’d argue that Pokemon Go, Hearthstone, and Fire Emblem Heroes are the titles MOP readers may be most familiar with when trying to explain these models.

The first is the solid model. It’s a have/have not system. You can think of Pokemon Go or (to an extent) Hearthstone for this, or even just old school MMO raid loot drops that aren’t token-based (see why I’m avoiding Remiar’s terminology?). This can also happen in games with stores where there may be seasonal items dropped from purchasable chests, such as in Star Wars: The Old Republic. This stuff is hard to get, and you may spend a lot of time/money trying to earn it, but once you do, it’s yours and will really last you. Especially with powerful items, the system is going to try to milk you, so be aware. Solid models have a large amount of things to collect, and their long term rewards are easy to monetize.

Next is the shard model. Hearthstone (and Overwatch too) is a good example of this, though other online card games may do this as well. You open your pack, and you get some cards you can use right now. That is a solid gachapon model. However, imagine that instead of the useable card, you got just the dust (or coins for OW). Now imagine that the dust or whatever currency isn’t a single currency but several, sometimes even specific to the card/item you want, forcing you to collect several before you can acquire and then later power up your precious.

Shard gachapon models work like this. Instead of getting the whole reward, you get a piece of it until you can craft it and even power it up with additional shards. Even though you may not immediately get what you want, Shard systems tend to feel fairer since you have a bit more control over what you get. The collection size is smaller because the rate of overall acquisition is slower, and balancing new items is a bit tougher, since launch items are relatively more balanced, especially when games use a PvP meta.

Finally we come to the hybrid system, the merge model. Fire Emblem Heroes fans will know that it has you merging duplicates to power up the original. 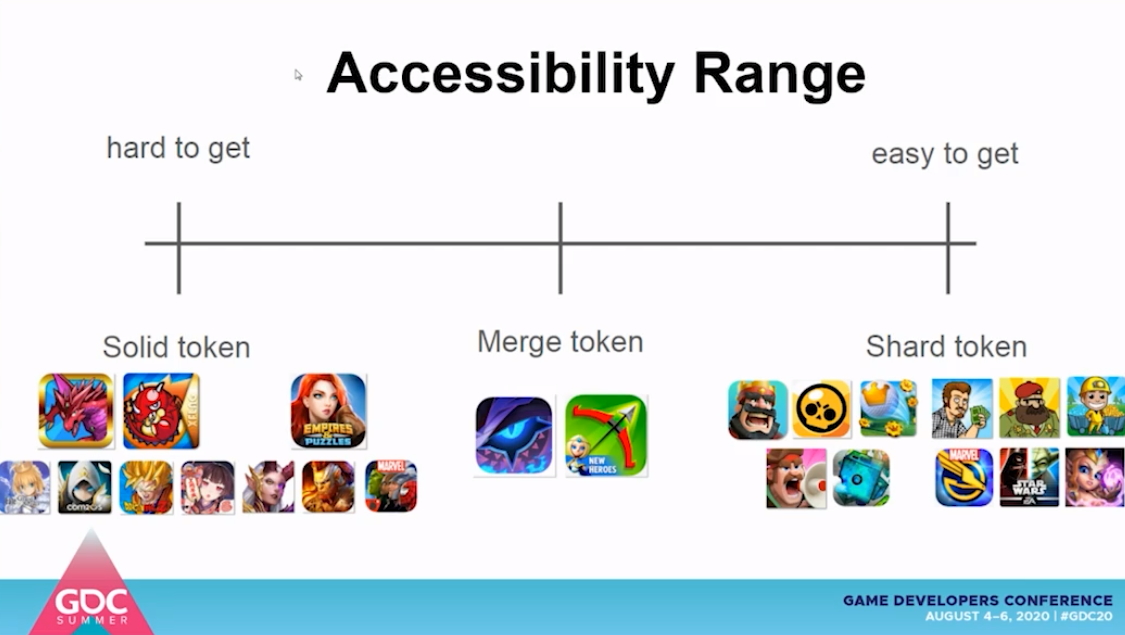 I really can’t think how often this appears in more traditional western MMOs or even many non-F2P titles. It’s generally a system I encounter chiefly with games using gachapon monetization. The general idea is pretty easy, as it’s a combination of the solid and shard models. Think of old school World of Warcraft and Sulfuras, Hand of Ragnaros. Imagine that Rag dropped it instead of having to craft it. Now imagine a second one dropping after you have the first one. Rather than throwing it away, you can merge it with your original one to increase its power. And much like your own level, you can sacrifice more duplicate Sulfuras copies to your original to make powerful, though it’ll cost more copies of the weapon to increase each level. That, in essence, is the merge model.

While solid is all or nothing, and shard has you saving multiple currencies, merge often fills your inventory so you have to decide what you’re going to prioritize, though some games like Nintendo’s Mario Kart Tour just let you hold as many duplicates as you want. Although it combines the two systems to theoretically meet a compromise, in my experience, the merge system uses the solid system to make you feel like you have something great, but then applies the shard system so it feels like you need to more of that rare to make it stronger.

When I asked about opinions on which model may be the safest in the long run for developers using to utilize these models (considering the overall movement against gachapon games and gambling systems in games in general), Dr. Remiar wouldn’t put one over the other. His advice was for developers was to be honest with drop rates and what random rewards may be, especially since even Japan – the home of the very phrase – bans several gachapon models.

While Remiar talked about some other pros and cons of each system, I’d argue that the games most of you play don’t rely on these systems and the details may not matter much to you on a daily gaming basis. But being familiar with them as gachapon continues to invade western gaming might help you better understand the general monetization strategies and the psychology behind them so you’re better able to manage your expectations as online gaming continues to evolve.