As we’ve been covering over the past few weeks, Dauntless is going to be shaking up the basic way to play and progress with the Reforged update, all of which is due to arrive tomorrow. I had the opportunity to take a moment to dive into some of the major features of this update, including the new Hunting Grounds and the new reforging mechanic.

END_OF_DOCUMENT_TOKEN_TO_BE_REPLACED
We start with the Hunting Grounds, which will be the primary method of facing Behemoths instead of Patrols or specific Behemoth hunts. That’s not to infer that you’ll be rolling the dice all the time on a hunt, as each of the multiple islands in the Hunting Grounds have a set monster roster that players can find.

Ideally, this won’t become a hindrance to those chasing a specific Behemoth for weapon and armor parts. The fact that players can face the same creature multiple times in one Hunting Ground seems to be the tradeoff, and the Hunting Ground we visited was most certainly active, with a couple of different Behemoth fights just waiting for us at pretty much every turn, so having monsters spawn in most certainly didn’t appear to be a problem during my short time running around. 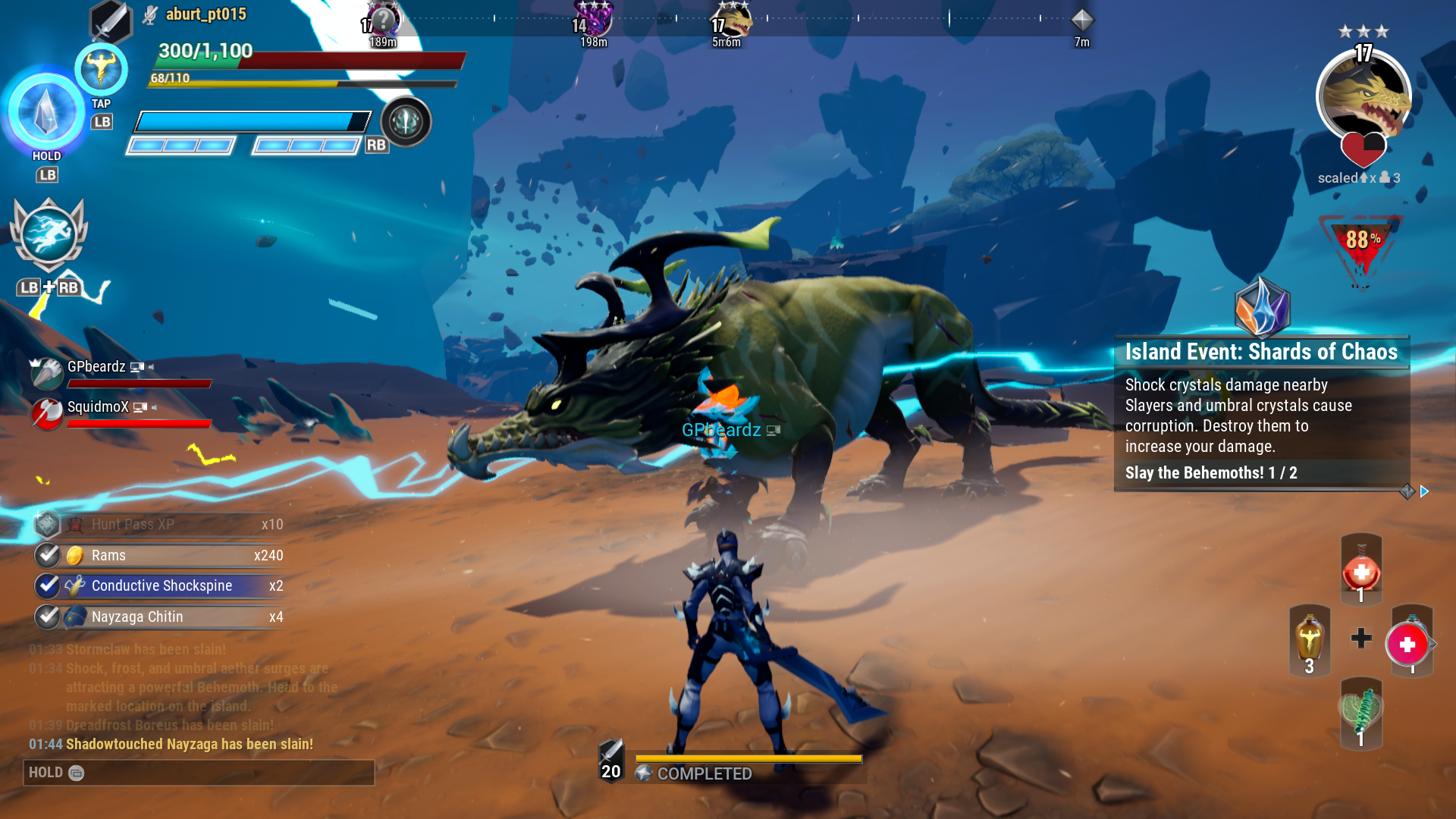 As for gameplay on the Hunting Grounds, there’s not too much different for regular Dauntless players – it’s still going out and whaling on big beasties, just doing it more and in more succession. That routine gets broken up by Island Events – multi-tiered fights with all sorts of different possible wrinkles and combinations that can appear.

Before launching into a Hunting Ground excursion, you can get a list of what Events take place, but even reading them ahead of time doesn’t fully prepare you; at one point during the Island Event that spawned for us, we were dealing with exploding crystals, a Shadowtouched Nayzaga’s teleporting shenanigans, and a Stormclaw trying to lay down electric fences at the same time. It made for a chaotic, challenging, and ultimately good time, with some significant rewards for making it through to the other side. 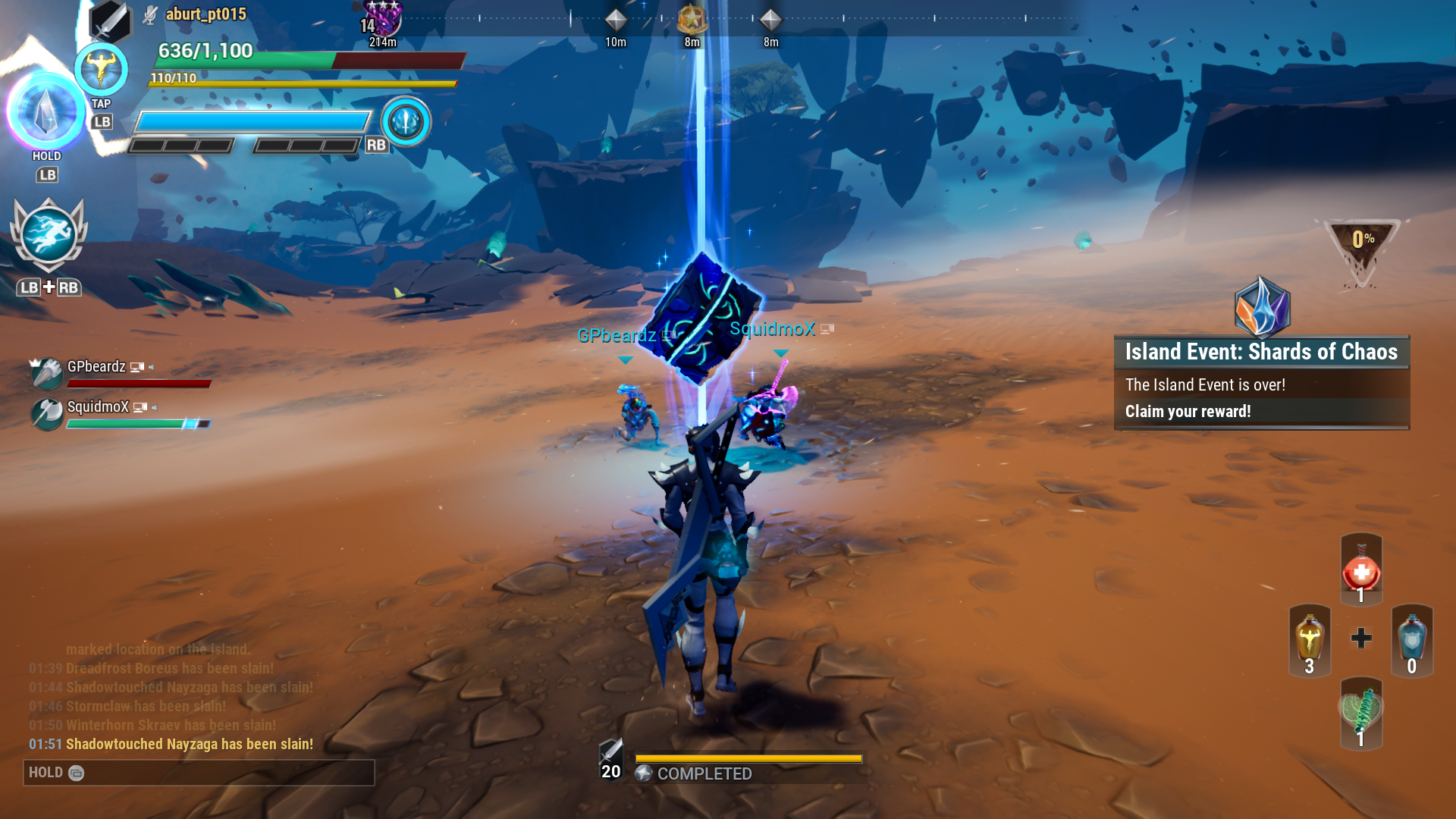 Another thing that struck me about our time on a hunt was an enhanced sense of risk and reward. Failure was always possible on old Patrol hunts, with defeat meaning you and your team would lose out on most of the really good rewards. That danger seems increased by a pretty large magnitude now, since one bad Behemoth fight after a string of successes could mean a whole lot of lost materials. Fortunately, there are a few ways to mitigate this risk, specifically by calling in an airdrop that lets players replenish their consumables and change their gear, though these are limited.

Finally, there are the additions of gliders, which add a neat bit of traversal, but ended up not feeling terribly useful; they add a neat little dimension to moving around the island but more often than not they were forgotten by me or openly ignored in favor of simply running around. 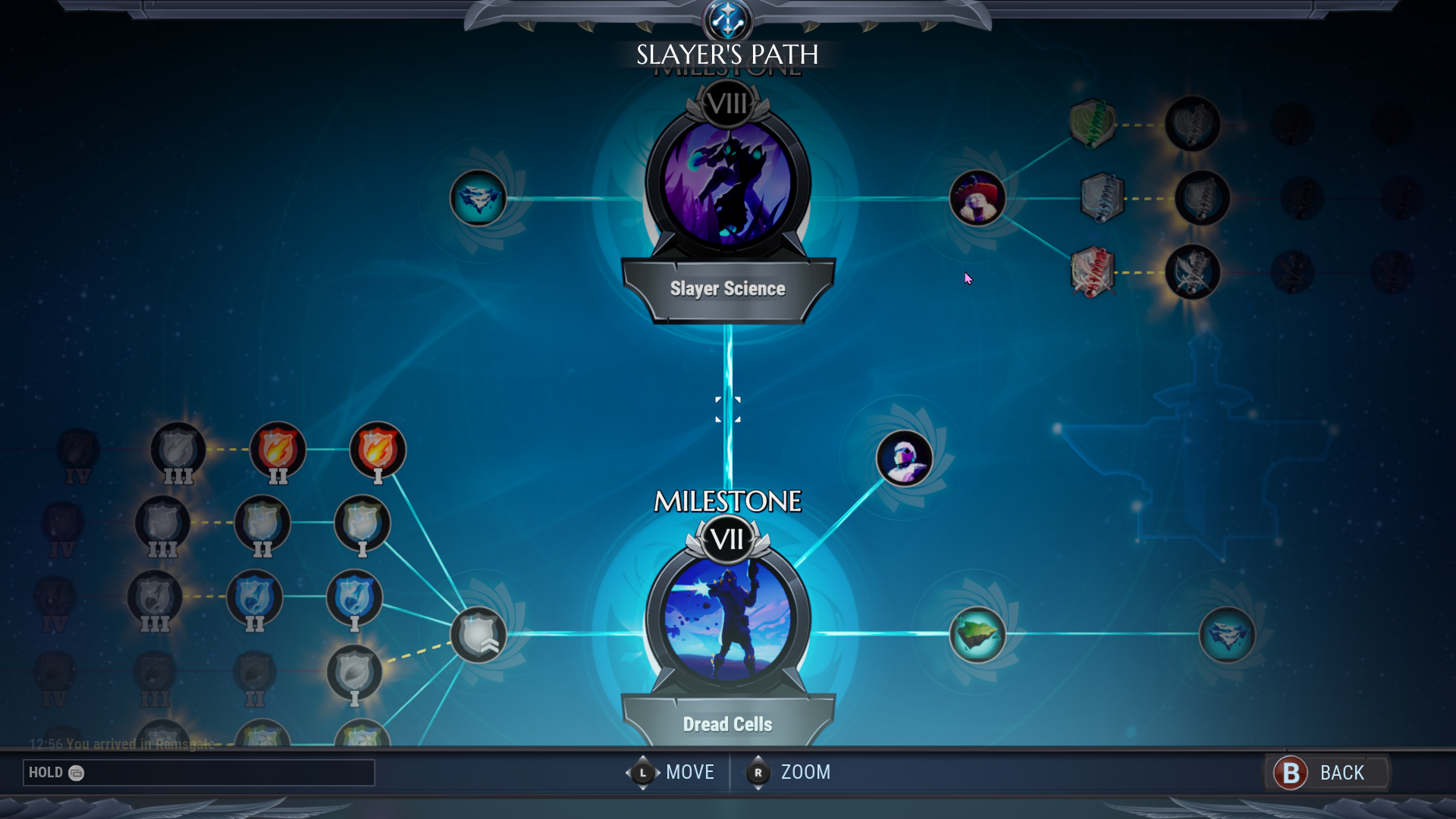 The other major piece of the Reforged update lies with the Slayer’s Path progression mechanic, a series of major Milestones that branch off into smaller trees that unlock features like new hunt locations, new benefits, and new boosts to a character’s weapons, items, and skills; we covered much of what this system is about in previous reporting.

What I was curious about was why such a dramatic change, and according to the devs, it was about opening up choices and making things seem less linear. Previously, quests were the main method of opening up new experiences in Dauntless, which was perfectly serviceable but ultimately nothing more than a tunnel. With the Slayer’s Path, the hope is that players will have a little more control in how their Slayer progresses.

Much of these side branches do require some currencies – Rams and two different types of a new one called Merits – to open up, and while it’s possible to open up all of the nodes on the Path, there is the potential for players to have to make some choices about where to spend their earned currencies. Or potentially grind their faces into mush to get all of the Rams and Merits they need. 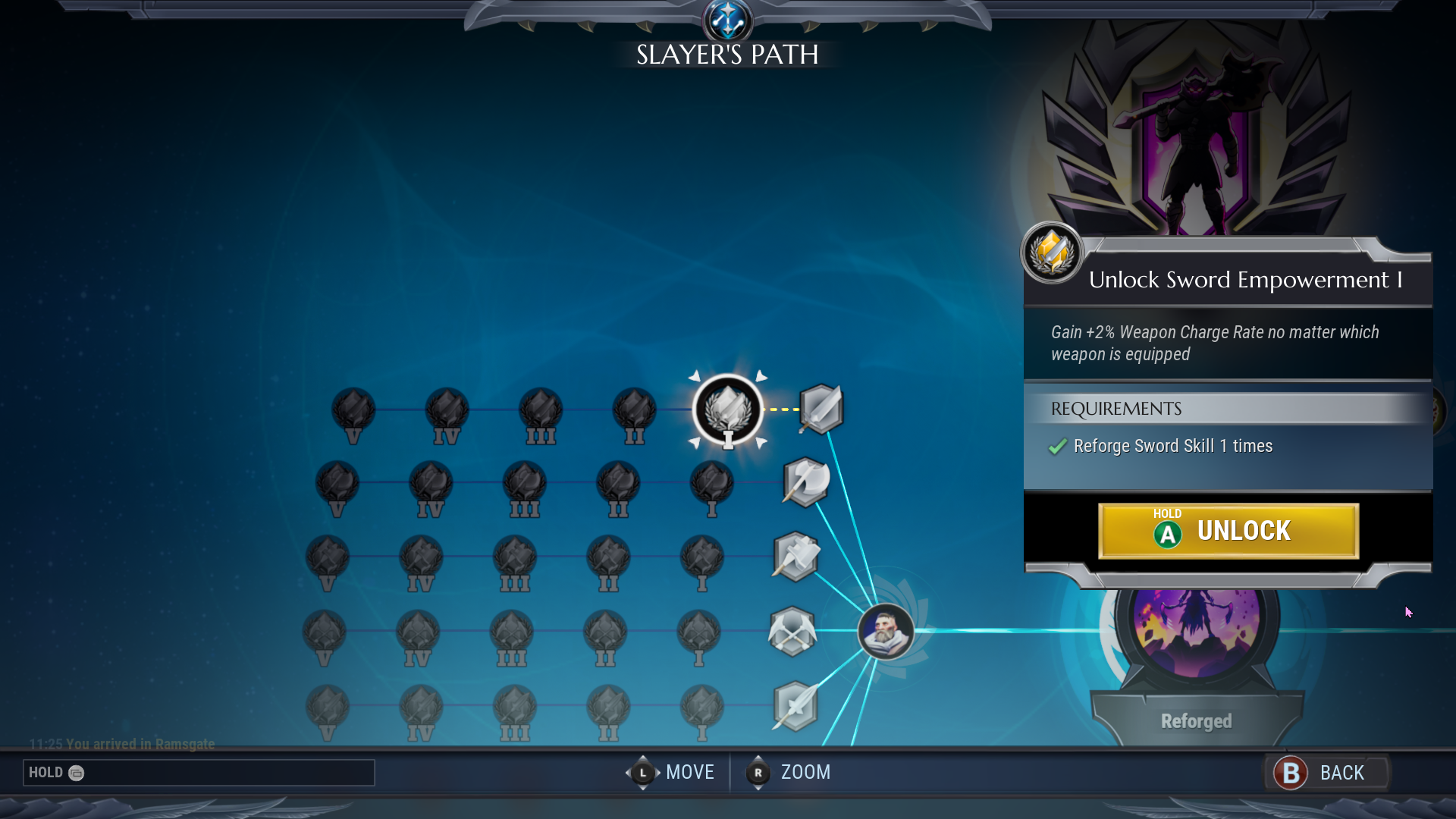 At the tippy-top of the Path lies two final major adjustments: reforging and power surging. In short, weapons can earn levels from use, and once they hit a maximum level of 20, they can be reset to level one and unlock some new nodes on the Path that confer permanent bonuses to your character no matter what weapon they wield.

As for power surging, this basically is a ramp up in power levels for weapons and armor. Both of these features are neat, but once again are linked to new currencies. Currencies which I had access to tons of in the test server account I was using, which is fine to see how things work but doesn’t really give me any insight on how this all will work at launch.

And that, ultimately, is the sort of impression I’ve gotten of this new update: one of unanswered questions and potential boons or problems that just can’t be figured out until it’s in the hands of the wider playerbase. The fact that things are changing this much is both intriguing from a gameplay standpoint and possibly damaging from a game time standpoint – if currencies and materials are hard to come by, are time-gated, or otherwise feel like arbitrary restrictions that can be circumvented by the in-game store, it could do more harm than good. The devs recognize that data and feedback will tell the story, though, and have said they will be iterating on these new systems in the future. 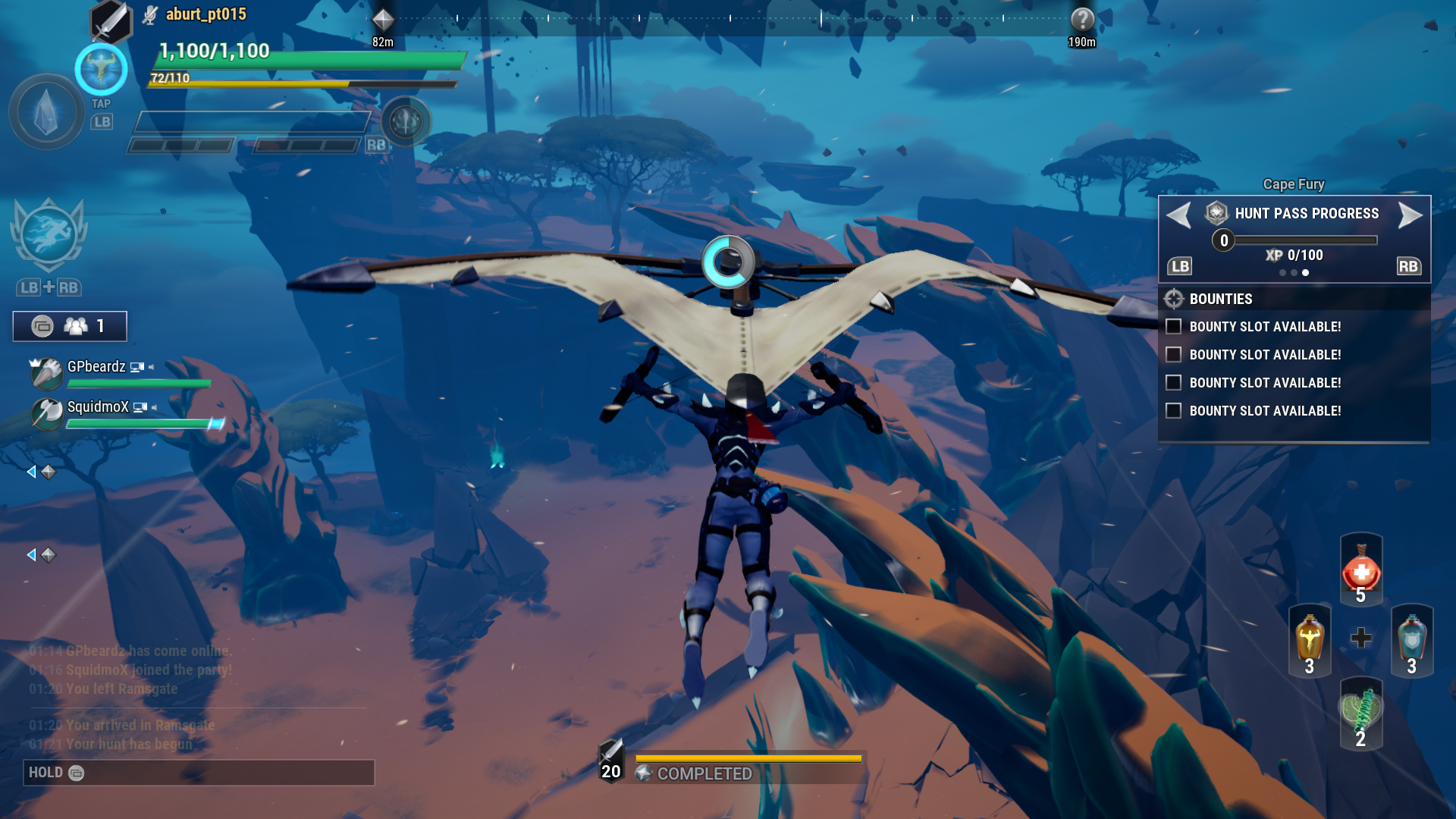 Even with these unanswered questions, I’m eager to see what happens next with this new update. It’s possible that my long time of watching Dauntless move from its alpha testing to now is coloring my opinion, but the devs of this particular multiplayer title seem eager to try new things and have generally been flexible and adaptive to their community.

There really is, at this point, no other way to find out beyond simply firing up the game, hopping into a Hunting Ground or three, and seeing what happens.