In the ongoing, neverending sandbox-vs.-themepark MMO debate, the folks on the side of sandboxes want one thing: more. Actually they want a lot more. They want more to do, more to see, more to experience. They aren’t content with linear, level-based, content-poor design tracks scrambling to be the next floundering WoW-killer. They definitely want more than just another online murder simulator. They want to cook and dance and explore and smelt and fish and argue and build and teach and fly and age and discover.

But there’s one thing almost no sandbox junkie asks for.

Almost no one asks for sex.

And it’s weird, right? A virtual world is at its most convincing and immersive when it includes as much to do and see and experience as possible. Most people find or seek love in their lives. Most people enjoy sex. These are things we live every single day, the same way we grow and learn and accomplish. Why aren’t they in virtual world MMOs?

That’s a trick question. They are.

But let’s be clear about the people who engage in what ought to be perfectly normal activities in virtual worlds: They are pariahs. E-RPers are the laughingstock of online gaming. No one is more ostracized. The same people who consider it an affront to their senses if boob-windows and bare thighs aren’t prominently displayed for their titillation in the middle of a warzone will flip out over the idea of sex in a video game — either with a teehee as if they’re 10-year-olds who just found a dogeared Playboy or with an ewwww because stimulation outside of some rigid cultural norm is icky. Look at those freaks roleplaying lovers, they say, before embarking on three straight hours slaughtering orcs while socializing on voice chat. Romance is sorta OK as long as it’s just making kissy faces at an NPC, but let’s flip tables if another real person is involved. In-game weddings are OK, but only if they confer some sort of powerful bonus. Nearly naked pretend women for eyecandy purposes are OK, but SHUT THE FRONT DOOR if two consenting adults decide to roleplay sex via text, something so normal and mundane that it’s usually boring unless you’re personally involved.

(But sheesh, at least it’s not as boring as video game fishing.)

So can we display just a little more maturity, please? If gawking at sexualized pixels is OK, active participation in sexualized activities ought to be too. If virtual violence is OK, virtual sex needs the same pass. A strong and complete virtual world needs both, among many, many other things.

There is an MMO on the nearish horizon that is promising sex, but first, a story and a Game of Thrones spoiler warning (be caught up to S5E6).

The collective internet freaked out a week and a half ago over a Game of Thrones episode that featured marital rape. Sansa Stark, who never even meets Ramsay Bolton in the novels, has been married off to him in the show and is now his to torment on-screen. The reason the internet freaked out — and I really mean that; there are publications that kept their heads through five years of awkward and gratuitous adaptation but drew the line at this rape — wasn’t so much that Sansa was raped by her new husband. It was that the rape didn’t further the audience’s understanding of Sansa or Ramsay (since we already knew she was strong and he was cruel), and worse, it was framed so as to provoke a third character, Theon, to reassert himself (which he didn’t actually do). That’s all part of a trope called collateral angst, and it’s a cheap writing ploy. You throw in a bad thing to propel a character to action, and you wedge in darker and edgier elements — sex, prostitution, and in this case, rape of a beloved character — as props to frame your setting, establish that you’re hardcore and Grimdark, and prove how nasty your nasty world really is.

This is a mistake I don’t want virtual world MMO sandboxes to make when they finally grow up and start treating romance, love, and sex seriously instead of just shoving boobplate into games and calling it a day. 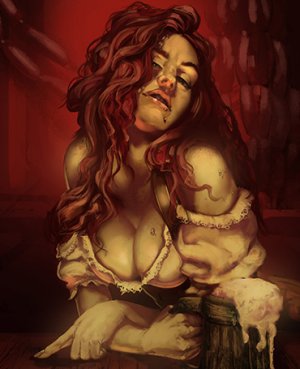 And that day is already approaching. Back in March, developer Illfonic announced that its gothic sandbox Revival will feature “graphic sex” in the form of an optional, censorable co-op minigame that you’ll play with other characters or NPC prostitutes in the service of leveling up your sex skill.

Sex is a cooperative mini-game. You do not control anything other than a simple mini-game during sex. In the background of the mini-game, the animations run for the sexual experience. The mini-game goes on as long as you can “maintain.” Both female[s] and males are [susceptible] to “losing” the minigame when their characters orgasm. The [number] of perk bonuses you get is based on how long you can play the mini-game successfully. However, there is a minimum threshold too. If you enter a sexual encounter and don’t meet the minimum time required for the sexual encounter, you can have a negative buff instead (sexual frustration). This minimum time is determined by […] each partner’s skill level in sex.

To be clear, while you are free to become a “prostitute for a guild or traveling group of characters,” Revival will not allow rape, sex with children, bestiality, or public displays.

Admittedly, a sex minigame in a game whose developers describe sex as a fun but “pretty disgusting thing” that’s mostly divorced from love in the game world is not exactly what I had in mind. Reducing anything to a minigame normalizes it in some way, yes; BioWare has built its reputation on romance minigames in many of its franchises, including MMORPG Star Wars: The Old Republic, for example. But in “gamifying” sex, MMOs risk turning deep and complicated human relationships into an abstraction at best and a joke at worst. And in Revival, the existence of sex (and specifically prostitution) is being used quite overtly as a proxy to establish the tone of the game and show that its devs are hardcore, which is exactly the mistake Game of Thrones has made for five seasons. I’ll let Illfonic explain:

This is a medieval time period. It is dirty, it is gross, and the people are gross within it. […] You will see a lot of features in the game that you don’t usually see in a game. Some of these are things most developers won’t touch with a ten foot pole because they are scared of the backlash. These things range from taking a shit, pissing, having sex, slavery, serial killing abilities, and more. These are not features that are in the game “just because.” These are features that enrich the living, breathing world as a whole.

I am not at all convinced that propelling my character to orgasm via a stamina minigame is really going to “enrich” my immersion or sell me on a “living, breathing world” or deepen my roleplaying opportunities. I’m pretty sure the whole system will devolve into groups systematically shagging pre-raid just to get their buffs in place because that’s just what MMO players do.

But it might be the necessary first step in solving the pervasive objectification-without-participation problem. And maybe, just maybe, if we start treating virtual representations of sex as just another game mechanic instead of something only cyber-pervs do in tavern corners and private whispers, we can shed the hypocritical Hot Coffee puritanism that still haunts the “respectable” corner of the industry that otherwise prefers to limit its brushes with sex to jiggle-boob ads, thank you very much.