END_OF_DOCUMENT_TOKEN_TO_BE_REPLACED
Ah, the crown store: the third leg of the business model (along with buy-to-play and subscription) that’s powered The Elder Scrolls Online to one of the more profitable MMOs currently in existence. Love it or hate it, there are some handy purchases available within it, as well as some that leave us scratching our heads. In this edition of Tamriel Infinium, I’ll be running down what’s available in the cash shop, what you should focus on with your money – and what you should avoid. Let’s dig in. 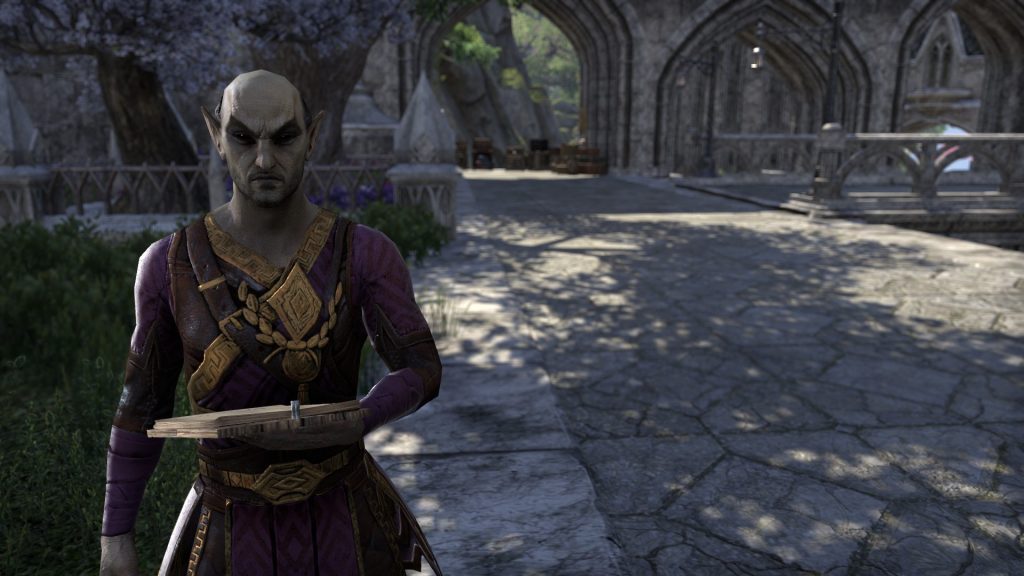 These are a little pricey, but the bang-for-the-buck is still hard to beat. For 5000 crowns (about $50) each, you can have your own portable banker, merchant, or fence NPC available at your beck and call. The first two are especially useful when your pockets get full while delving the depths of ESO’s dungeons and raids.

Likewise, if you’ve been on a thieving spree and you don’t think you can get out of town without being accosted by a guard, simply pull out your pocket fence and sell all of your stolen goods before Johnny Law can relieve you of them. It should be noted that these assistants don’t provide all of the services that a regular bank/merchant/fence NPC can. For example, your portable merchant does not repair your armor, and fencing items with your personal NPC will cost you a hefty 30% gold fee. Still, considering the amount of use they get, I’d judge it’s worth grabbing the assistants as soon as you can.

One of the major reasons we play MMORPG’s is for the RP aspect if for no other reason than that we want a character that makes us feel unique among a sea of other rogues, wizards, and knights. The ESO cash shop provides many appearance customizations including costumes, hairstyles, and adornments. One piece of advice that I give to new players is this: Don’t put a permanent skin/facial marking or adornment on your character during creation. These types of things are available via in-game unlocks and cash store purchases and are easy to swap out when you get tired of the look. Choosing facial markings or permanent earrings for your character during creation can result in the purchase of an appearance change token (available for the low, low price of 1000 crowns!) once you get tired of the look.

If you’re a buy-to-play player, it’s worth saving your crowns for additional in-game content. Purchasing these upgrades from the crown store guarantees that you’ll have access to the content forever. However, if you’re a constant ESO Plus member and subber, there isn’t much reason to spend crowns on DLC, as everything but chapters is included in your subscription.

I used to buy mounts from the store before I had many to choose from. The dire wolf and cave bear are a nice change from the standard horse mounts, but the senche (big cat) mounts are my personal favorites. The longer you play, the more mounts you’ll collect via events, pre-orders, and special rewards, so the purchase of mounts via the store becomes less and less attractive. But if you’re looking for a little variety early on, mounts can be a fun way to spend your crowns.

These little furry (and scaly) friends provide surprising moments of fun with their antics and animations. But even more so than mounts, players will eventually find themselves drowning in cosmetic pets. They show up often in daily logon rewards and can even be earned via festival currencies and through preorders. I’d hold off spending crowns on these unless you’ve had your eye on a certain one for a very long time.

The Imperial edition was originally a special version of the base game that unlocked the ability to create a character with the Imperial race. It’s now available as an upgrade in the crown store, but at 2100 crowns (a little over $20) it seems a little steep for a race and a mount. Unless you’re a huge fan of Imperials or you just want to make sure you’ve got all of the game options unlocked, it may be best to wait for this bundle to go on sale.

When the Homestead DLC dropped, many gamers said housing in ESO was just a gold sink, and of course it is, but that’s not the point. That point is that housing in ESO is well done, there are a huge variety of housing options available, and players enjoy it. Entire Twitch streams are dedicated to housing customization in ESO. I have purchased one large house in ESO myself; it’s a nice place to retreat to when I’ve got the itch to chill out and rearrange furniture. But generally, housing is not something I look to buy. There are situations when you might, though, such as if you are a collector, if housing is your endgame, or if you just have too many crowns saved up from years of subscribing and nowhere else to spend them.

You know those mystery-flavor Doritos? Hate them. Random mystery hot wheels car? Nope. Loot crate subscriptions? Not for me. I like to know exactly what I’m getting for my money, so I’ve never purchased a single crown crate. I don’t mind if a studio gives me a few for free, but that practice has really tailed off over the past year. ZeniMax does put exclusive items in the crown crates, so I guess I do understand people who buy them for the chance at that one special item. Never mind, no I don’t. Buy these if you like to gamble.

One of the most recent additions to the store, players are allowed to purchase the skyshards (roughly equivalent to skill points) for an alternate character/s once all zone skyshards have been found on one character. I can’t recommend avoiding these, since I could see how they could be considered a convenience item, but something about them just feels wonky. I will not be spending crowns on these, but it’s reasonable that some people might want to.

Most players will tell you, don’t pay for these. Bites are available from certain NPCs in game and from other players. The afflictions can be cured by NPCs for a very small amount of gold. Any guild member worth his/her salt will offer their once-a-week bite for free, but even if you insist on playing an MMO without friends, it’s possible to just show up at one of the shrines and find another player just waiting for a victim to ambush. My werewolf bite happened in just this way!

Experience boost scrolls are great for leveling. They stack with other XP buffs such as the Anniversary Event cake or the Jester’s Festival pie. But they are readily available via login rewards. I’ve got a stack of these things that I can’t seem to use fast enough. I’m honestly surprised that they’re still in the crown store.