It’s patch day for City of Heroes’ Homecoming servers, and it’s a fun one as it effectively launches the numerical power cooldown indicators teased earlier this week. This feature is technically in beta, and you’ll have to turn it on in options, but at least it is an option now for the game’s 95,000 registered players. And while there are plenty of bug and crash fixes on deck, players can also look forward to tweaks for the base editor, graphics additions, face texture repairs (tl;dr: a whole bunch of weird faces just became usable), a rebalance for merit acquisition and conversion, and a ton of improvements to specific powers. For example, I main an Earth/Storm Controller, so I’m thrilled to see logical quality-of-life changes like this one:

On the downside? They’ve nerfed Death From Below, sigh. That was the instanced group content that a lot of folks would hop into over and over for a… well not fast but faster ride to 50. It’ll now grant less experience once you’ve hit level 10, up to level 20, at which point it grants exactly half as much experience as it did at level 10, all the way up to level 50. “Because this was far more accessible to anyone that wanted to participate, and it did have one key benefit (allowing you to ‘skip’ the first 10~ levels that you’ve played a hundred times), we wanted to be careful with how we approached it,” the team writes. “As described above the XP rate starts dropping down after level 10, and drops down to be more in line with other content as you approach level 20. This means you can still do 1-2 runs to get yourself to level 10-15, but after that DFB is no longer the most efficient thing to do.”

The whole patch notes thread is worth a look, as devs have also posted images of some of the graphics upgrades to faces and powers that have been made.

Also worth your notice? The new user agreement the player group has implemented as of the update this morning, as well as the game’s latest code of conduct revisions. The announcement of a formal user agreement by a rogue server caused consternation across City of Heroes forums and Discords last night, but Homecoming says that its chief goal here is to comply with US COPPA laws and GDPR-related data protection regulations, as well as to protect itself from user-generated litigation. Of course, it won’t protect any such shadow server from litigation from the copyright holder itself, but as we’ve noted, NCsoft has yet to pursue any of these servers, including the ones who’ve announced that their companies are hosting in not-at-all-shadowy locations, so it remains to be seen how that will shake out. As always, we strongly urge potential players of this and any other rogue server, City of Heroes or otherwise, to read everything you’re asked to agree to for your own security.

Here’s what else is going on around the CoH rogue server community:

We heard from a player named Tortoise this week who put the game into a fresh perspective for me this week: People are coming to these City of Heroes servers to get actual world firsts. This is happening. “Our group, Team Veracity, completed the badge achievement The Really Hard Way on the Homecoming City of Heroes server,” he told us. “This badge was considered by the devs to be practically impossible when it was released, requiring players to defeat the (current) final boss of the game without lowering his level to a manageable state.” Congrats, folks!

We checked in with the Ouroboros dev team for a status update! “OuroDev is getting close to a Volume 2 Issue 1 release,” a rep told us. “Recently, OuroDev has been working closely with the Rebirth and Pleiades servers to identify and clear several crashes and zoning issues for this release. The team has a few tasks left to complete, which are listed on the bug tracker. After this, we will publish a release with binaries, data, and setup/config guides. After the Issue 1 release, Ouroboros will lift the feature freeze and start considering requests and accepting code for new features for Issue 2.”

Finally, earlier this week we posted about a rash of hack attempts on multiple City of Heroes servers, and unfortunately, we’ve seen evidence that hacks (and threats to pursue future hacks) are continuing. But we’ve got good news out of the Discord-backed Rebirth server, which was taken out of commission because of that hack this past weekend: It’s back online now thanks to some timely hosting assistance from Ouroboros. 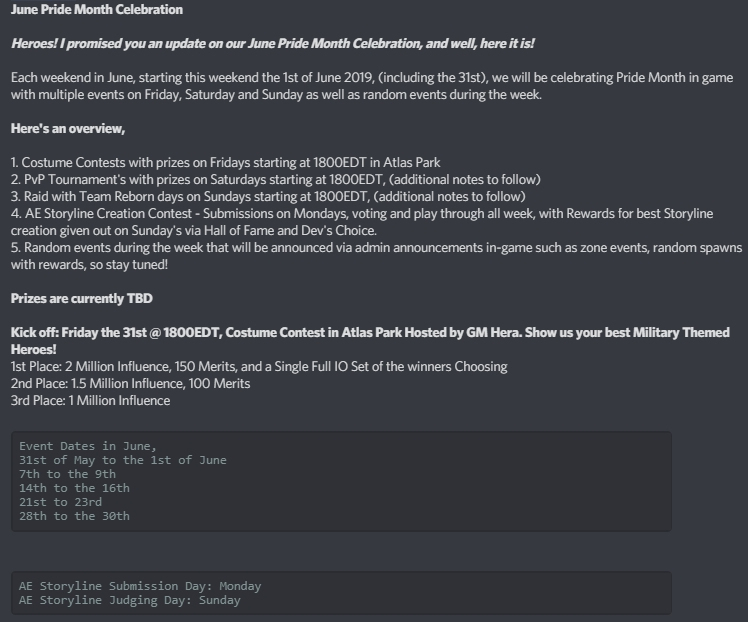 That particular server’s gotten a big infrastructure upgrade too.

Got City of Heroes community news you think we should cover? Drop us a note!
Confused about the City of Heroes rogue servers? Our extensive coverage can be found right here, and we’ve posted a list of all the servers we know about too. The short version is that this spring a leaker exposed a secret City of Heroes server running for the last six years using the sunsetted game’s original code, which was ultimately turned over to the community. There are now multiple player teams working on multiple public and private servers for the beloved superhero MMORPG, with over 95000 people on Homecoming alone. So far, NCsoft has not commented publicly or taken legal action on any of them, and the company is in talks with players regarding the game’s future.
Advertisement