Following the abrupt shut-down of the first City of Heroes rogue server yesterday, the game’s community has been in turmoil as leaders urged patience. Now, it’s been made clear why, as the Titan Network has finally announced it’s been negotiating directly with NCsoft to open a community-run City of Heroes server, all above-board and legal.

Titan Network, run by Tony Vazquez, has been a staple resource for the City of Heroes community since long before the sunset, hosting Paragon Chat, the Titan forums, and the Paragon wiki. It would not mark the first time that players have sought to deal with NCsoft, though we assume that the last time inroads were made, nobody knew the source code was in the wild.

MMO players will recall there is precedent for this sort of collaboration; MMO studio Daybreak famously partnered with Project 1999’s, the player-crafted classic EverQuest server.

It is not currently clear when the server will open or what it’ll be called, but ideally we won’t be gaming from the shadows.

The Titan Network is in talks with NCSoft regarding a community-run City of Heroes server. Things are looking positive, so stay strong. We don't have a timeline right now, but we'll provide more updates as soon as we can. #SaveCoH https://t.co/zSq3nTEScM

The leaders of the original Discord made this statement at midnight, acknowledging the Titan Network negotiations as real but suggesting the Discord team is still working toward its own solutions. 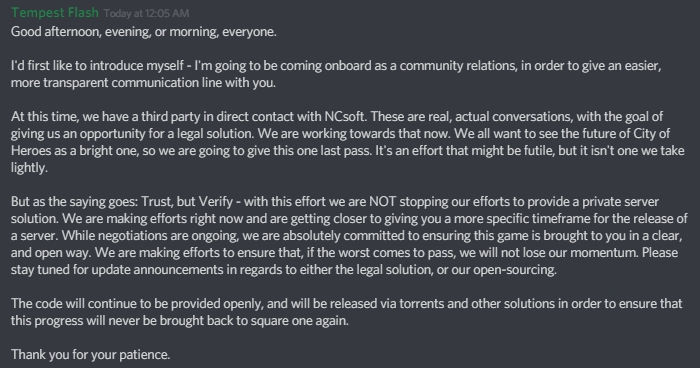 Overnight, the original Discord posted a massive Q&A on Discord to fill the community in on more. Most of it boils down to the fact that they’re working on it, don’t send money, more time is needed, and a timeline will be up when they have one. The group is working to surmount the expense and difficulty of getting a new server up without relying on NCsoft’s largesse. They’re apparently compiling i25, not i24 – with a team working on each one so that an “easy-to-deploy private server solution” is also on the table – and they claim that an i25 version will go up “ASAP.”

“We are working on multiple solutions,” the new PR rep, Tempest, says. “Our eggs are NOT in one basket, and we are absolutely not going to simply sit back and wait on NCsoft on this. Coders are still working, and optimizing as we speak. […] Server progression information will be coming once we have it, like I said developments are happening in such a way that it’s very difficult to pin down specifics on that front. But I CAN get you this bit I just got fresh off the presses!: The source code has been built successfully. Multiple developers have managed to create characters and get ingame. There are still some functional bugs keeping the source build from being deployed that are being worked on.”

Why can’t they just redeploy the weekend server?

“For one, we don’t actually have that hardware onboard anymore. Secondly, we were throwing hardware at the problem rather than coming up with solutions – there were several issues with the mapservers that was causing significant problems, and simply overpowering that kind of issue with more hardware like a band-aid is not a solution we want to move forward with.”

Finally, the PR rep reminded everyone to stop harassing Leo. It’s not OK folks. And while we’re at it, don’t hassle NCsoft, either.