The business of saving City of Heroes has now stretched on three weeks since our first article, but it hasn’t slowed down a bit. Over the weekend, we covered the new 4chan-linked server, Homecoming’s code of conduct, the Ouroboros test server, a new small boosted experience server, and confirmation that talks between Titan Network and NCsoft continue.

But even since our last report, there’s been big news. Players will recall that just a few days ago, the Homecoming team suggested it wouldn’t be doing character transfers at all to help players move from overpopulated servers to those without queues, specifically because a tool for it didn’t exist; in fact, all it could promise was that it would try to manually move characters between shards should it ever need to close one down.

That’s all in the past now, as late last night, the team brought character transfers online. Caveat: They’re technically down as I write this post Monday morning as the team is investigating some sort of shard crash, but we assume they’ll be back once fixed. Here’s the deal:

“Did you want it? You got it. One of the most requested features of all time on our servers is coming live NOW. Like, NOW now. Now. Like, now. Right now. Yep, this very second. SHARD CHARACTER TRANSFERS ARE NOW ONLINE. You can take your character from Torchbearer to Indomitable! Or Everlasting to Excelsior! Or anything in-between. This feature is in BETA, and while we have done extensive testing, it should still be done carefully, and you should transfer your mains only with that knowledge. Current limitations are 5 character transfers ever 3 days, don’t want to overdo it. That limit likely will be lowered over time. The transfer button will be at the top of the character select screen, looks like a pair of arrows. Also, the transfer may say it’s ‘Busy’, the solution right there is to wait.”

Homecoming also kept the fun coming this weekend by rolling out lockboxes! I’m kidding. The team’s actually bringing back the original game’s Super Packs, but instead of being buyable in a cash shop (which for obvious reasons is not happening), they’re buyable through the in-game auction hall with in-game currency, which should both bring the items into the game and help drain a bit of inf from the slowly inflating economy.

The group further clarified that it will not be rolling back to pre-i25 content, that i24 isn’t more optimized, that “there’s no basis to the rumour that [i25] cannot be updated,” that it will avoid character wipes if at all possible, that it’s not making any money (just the opposite), that it’s still not soliciting donations, and that it’s not porting original characters. Perhaps most importantly, the team writes that it has “no issues with anyone else running servers” but won’t be cooperating with “any groups whose behaviour puts [Homecoming itself] at risk.”

Want some hard numbers from the weekend? At the time of the snapshot on Sunday, the four Homecoming servers once again saw over 6000 concurrent players. Here’s the breakdown from Discord:

Finally, it just wouldn’t be a City of Heroes update without a little bit of drama, would it? Apparently the Reddit team has called out the Homecoming team in Discord; the lead admin says Homecoming as a team hasn’t “acted in good faith” with Reddit, allegedly refusing to help Reddit set up a server or respond to its “requests for clarification and communication.” We asked Homecoming about the spat, and here’s the message its representative sent us: “Our official response is that we aren’t engaging in this conversation because it’s just a waste of time, and that’s it really. Please don’t harass anyone from the team for a response because you won’t be getting one.”

Requisite reminder: These are rogue servers, not technically sanctioned by NCsoft, though NCsoft has not made any public statements about them. Negotiations between Titan Network and NCsoft continue, but it remains unclear whether the currently live shards will be wiped or maintained permanently or how any of them they will be funded long-term. Please do not give anyone money for City of Heroes servers right now. 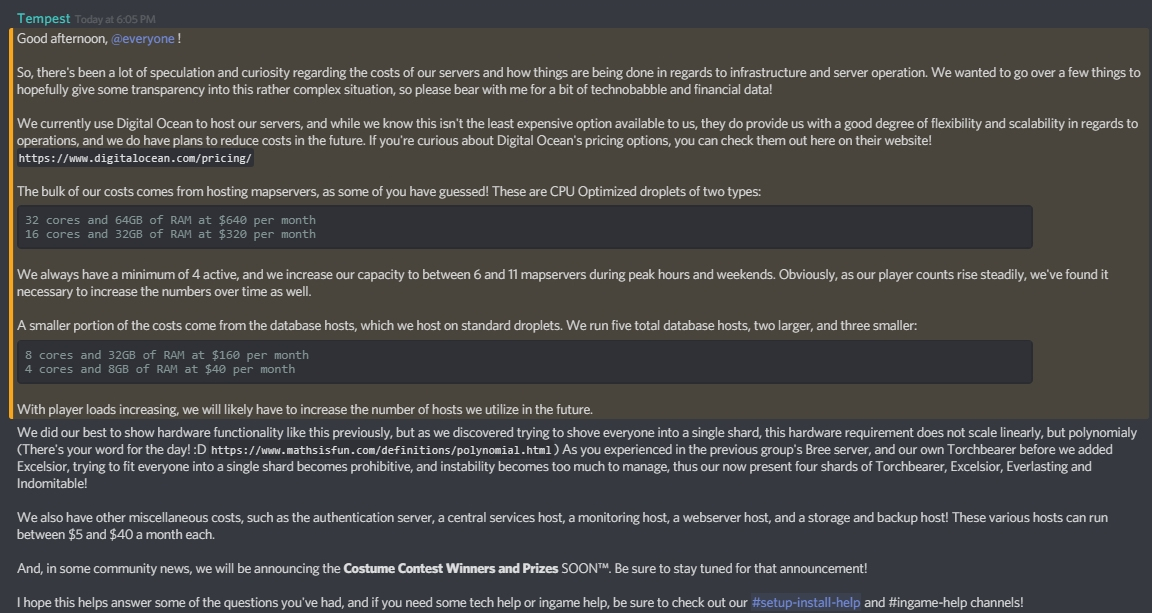