Just in case you didn’t think City of Heroes had enough community rogue servers, here comes another one.

The Homecoming team – that’s the team with four servers running a modified i25 build already – announced this morning that it’s bringing a fifth online. It’ll be called Halcyon. But don’t get too comfy; it might be temporary.

“We have a new shard coming online soon to help balance out the load. This shard will be possibly temporary, a stop-gap solution to provide some additional room for you to help avoid the Queue debuff. This Possibly Temporary Server (see what I did there?) will be coming up…right about…now! In the event that we decide to shut the shard down, we will give you a full seven-day notice so you have plenty of time to collect your things, pack up, and transfer your characters to another shard.”

Yep, character transfers are back up too, along with a patch that properly grants extra respecs, fixes cooldown bugs, tweaks the Positron task force, and adjusts Faultline badges. Critically, it returns full experience gain to developer’s choice arcs in the Architect Entertainment system – but not to farm arcs. Sorry farmers.

Requisite reminder: These are rogue servers, not technically sanctioned by NCsoft, though NCsoft has not made any public statements about them. Negotiations between Titan Network and NCsoft continue, but it remains unclear whether the currently live shards will be wiped or maintained permanently or how any of them they will be funded long-term. Please do not give anyone money for City of Heroes servers right now.

As Leandro Pardini noted in our comments, shard developers have been asked to place their patch files in their own folders rather than into the SCORE folder to avoid this very problem, but since not every server operator is apparently heeding that request, players may have to be proactive in keeping their installs tidy. 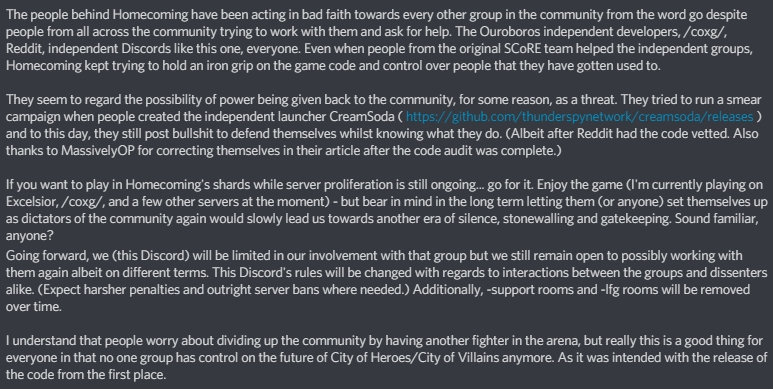 In the interests of trying to sort out who is accusing whom of what and what is actually happening as opposed to what is a misunderstanding, as well as allowing the accused to defend themselves, we reached out to several of the larger teams working in the City of Heroes rogue server community. Please note there are a million statements screencapped here; you can click each one to expand it and make it more legible in your browser.

We spoke to Michael Cullen, a mod on the 4chan-backed /coxg/ Discord and the lead on the CreamSoda team; here is his statement in full. 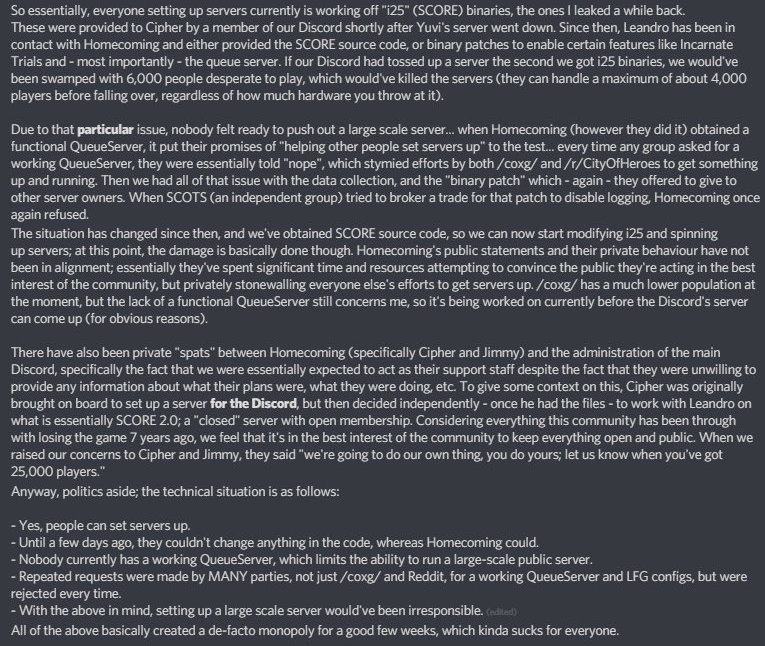 While Ouroboros was mentioned in the original statement, it wasn’t actually party to the accusations. We spoke to an Ouroboros representative directly as well; here’s the statement he provided: “We have provided input regarding what Ouroboros is working on to the City of Heroes Discord. As for our stance on Homecoming, we actively stay away from the drama going on in the community. What Homecoming does or does not do has no impact on the goals of the Ouroboros team. Homecoming has not impeded our progress.”

We reached out to the SCOTS team for a statement and will update with that if they decide they even need to to make one. [Update: Now we have it too!]

Leandro Pardini of the Homecoming team provided us a lengthy statement defending the server against the accusations. 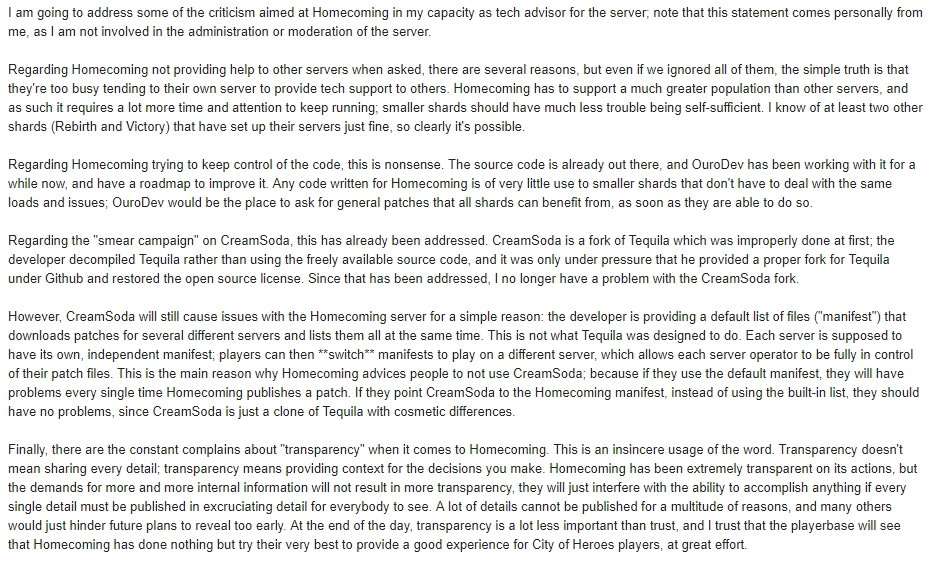 Leandro also noted that Homecoming – and SCORE before it – didn’t initially have a functional QueueServer, which is why Torchbearer struggled so much initially as Homecoming’s coders sorted it out. The QueueServer source code has been public on OuroDev for two weeks (linked and dated here*), but he explains that each individual server will need to compile, config, and tweak it to its own environment – that is not something Homecoming can do (or even should be expected to do?) for other servers. Similarly, the turnstile server used for Incarnate trials is public but needs individual configuring to work. In sum, he argues, anybody can set up a server and QueueServer with the publicly available code and some elbow grease, and requests for QueueServer and LFG configs are being rebuffed by his team because they are different for every server.

Leo then subsequently explained the details of the allegedly missing files in Discord, which based on the shocked reactions of those in the channel seems to be the first time anyone from Homecoming has explained all this in one place to the public. 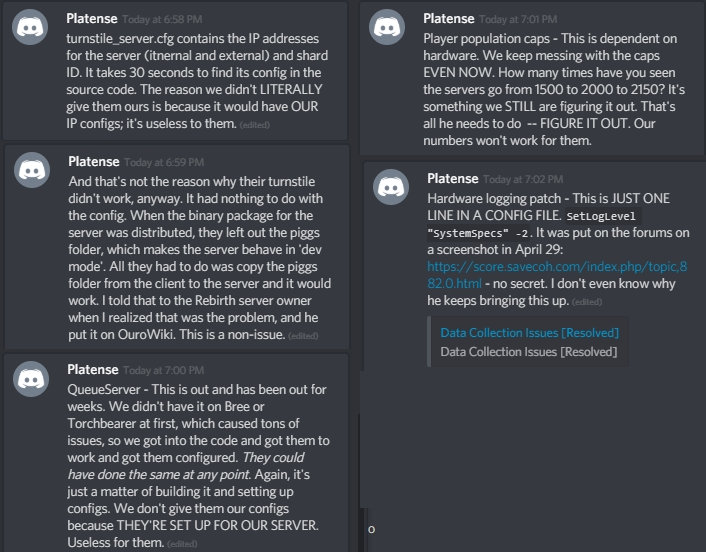 Michael Cullen has since clarified, “The issue wasn’t the lack of i24 code, it was the lack of SCORE code (for the binaries that were released). QueueServer by itself is useless when DBserver crashes as soon as it’s enabled.”

We also requested a statement from the Reddit Discord; co-admin Kass originally provided this statement, which jibes with the comments from Discord and /coxg/, but as it came in after Leo’s Discord comments, Kass updated the statement with additional comments and questions, as shown here: 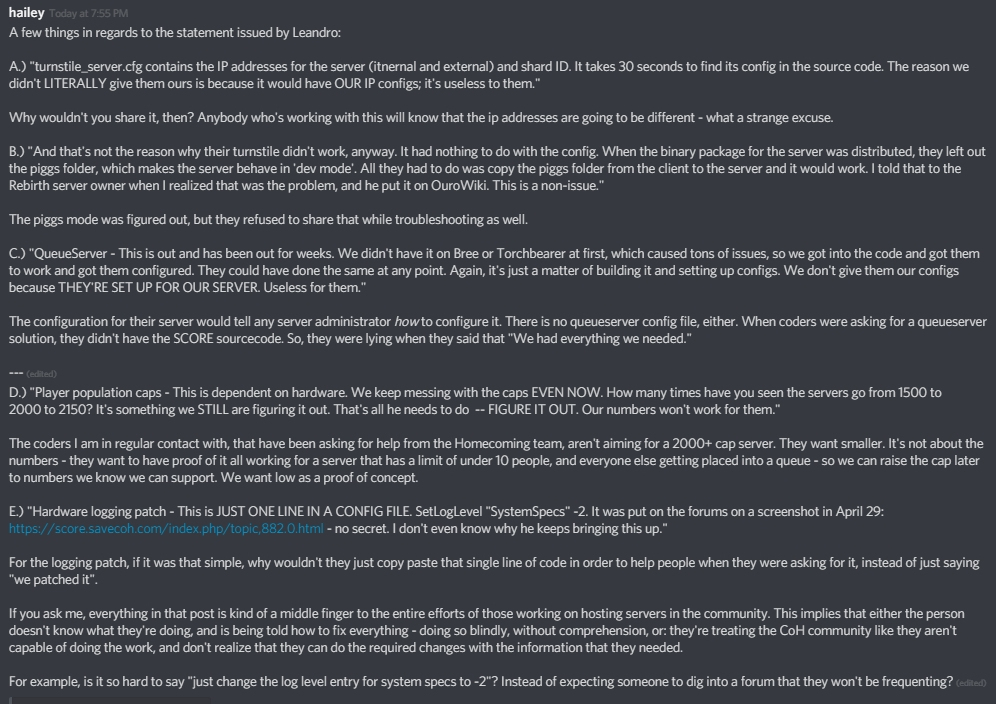 In response to the additional questions, Leo said only, “I see they bring up when I said ‘you have everything you need’. I should amend that to say, you also need competent coders.” [To clarify here, he was speaking specifically to the comments/questions immediately above, not to all coders everywhere.]

GM Jimmy and Cipher declined to comment for this story. Public discussion appears to be continuing in the Homecoming Off-Topic General Discussion chat.

“We’ve been asked time and time again if you’re able to financially contribute to the Homecoming team, and so far the answer has been ‘not yet’ because we wanted to ensure we weren’t putting the server in any unnecessary risk,” the team announced this evening. “Today that changes. We’re happy to say that we’ve now set up as an LLC (the first step towards becoming a non-profit) and are in a position to be able to take donations in order to keep the servers online.”

According to the developers at this newly formed Homecoming Servers LLC, the team plans to move the Homecoming servers to a less-expensive hosting solution; the donation drive is intended to cover a month on the new server as well as offset one-time costs, at which point donations will be turned off until next month. Here’s the financial outlook: 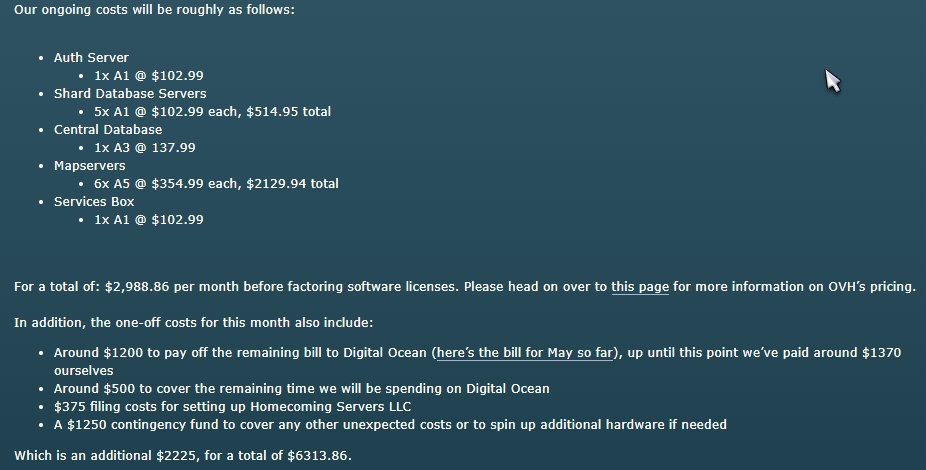 Homecoming vows there will be no in-game benefit to donation outside of a future forum title or future queue priority and that the company will eventually formally transition to a non-profit. As I type this, the donation site had only been open for 20 minutes before raising the $6300 required – more than what was required, in fact, and the donation page has already been disabled.

Please be aware, NCsoft has still not commented publicly on these servers, and it remains unclear whether it will do so now that multiple teams are accepting donations.

Worth noting here is that on April 24th, Homecoming said it was “investigating how the community is able to financially support this server in a way that doesn’t put us in any legal jeopardy.” On the 28th, it chided another server that wasn’t yet online for taking donations, calling the move “incredibly dangerous, selfish, and reckless behaviour” that had “a very good chance of getting not only their operation shut down, but [Homecoming’s] as well. […] Please note that we are not talking about the ‘reddit’ server, they are not publicly soliciting donations. We have no issue at all with anyone else setting up their own server (we would in fact welcome it – ours are getting a little busy!), as long as they are behave responsibly.” It also said at the time that “the Homecoming servers are currently being funded by a few private individuals, and until [the team is] comfortable about opening up for public donations it will stay that way.”

It is not immediately clear what has changed in the last week (though we bet you have a few guesses). If you are concerned, we strongly advise you to hold onto your wallets. 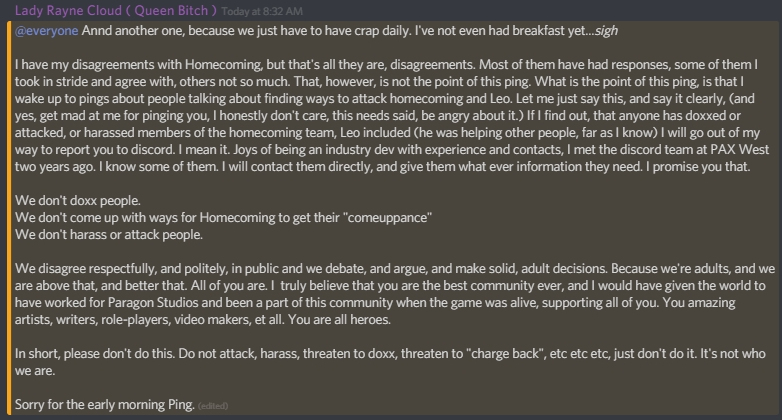