This story has been updated several times over the last few days; updates are at the end. The original story follows.

Can we just agree that the City of Heroes drama going on right now is wild? Turns out it’s damn hard to organize thousands of hungry players and coders in the shadows, and even prior to last night’s announcements – that Titan Network is in talks with NCsoft to bring a legal player-run server online and that Discord groups are continuing with independent efforts – the community was in disarray. Picture thousands of people banging their silverware on the table and calling for the heads of the waitstaff and cooks. It was like that.

Well, now they’re getting another taste of the City to whet their appetites, as a new temporary server is coming online today. It sounds as if this one’s being presented as a joint effort between multiple groups. Organizers stressed to us that it’s a temporary measure to give folks somewhere to congregate as negotiations continue, so don’t get too attached to your toons. It does appear registration will be the same as before, through the SCORE website.

As always, we remind our readers that even though NCsoft is apparently willing to negotiate, these servers are still technically illicit, so please weigh your safety accordingly – we cannot advise you to do anything illegal and in fact have penned a piece discussing the legalities of these servers. We also continue to urge gamers to cease harassing Leandro and hassling NCsoft – it’s not helping. 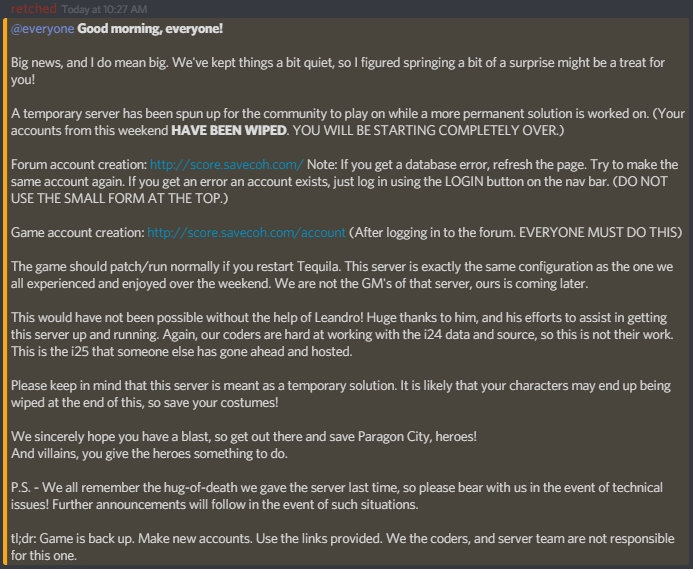 While the Reddit Discord is working on an independent server. 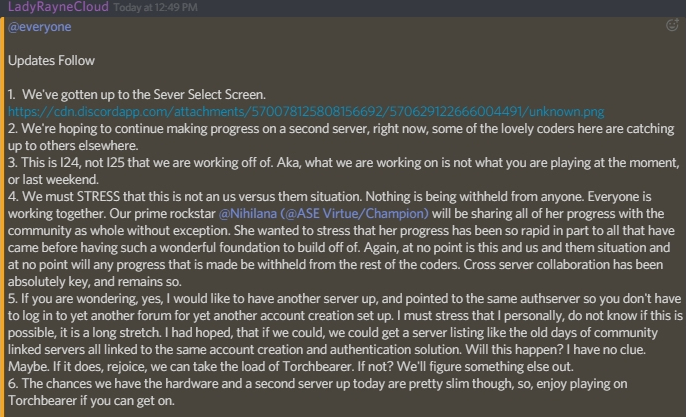 “Firstly, you guys have done a fantastic job of hugging the servers as tight as you possibly could. In the six and a half hours that this server has been opened we’ve already seen nearly 10,000 account registrations and over 2,200 players in-game concurrently. The servers are holding up pretty well, but there are definitely going to be some growing pains with a community as large and passionate as ours.

“I would like to thank Leandro for his support with this project, without his help none of this would have been possible right now.

“Going forward, we would like to communicate with you guys through the official forums until we have worked out something a little more flexible; we understand that the forums are under a lot of load right now and aren’t always accessible. We’re still working on all of this in the background and we hope to have more information ready for you guys soon. In the mean time, we look forward to seeing you guys in Paragon City once again and hope that you enjoy your time on the server. Thank you again for all of your support.” 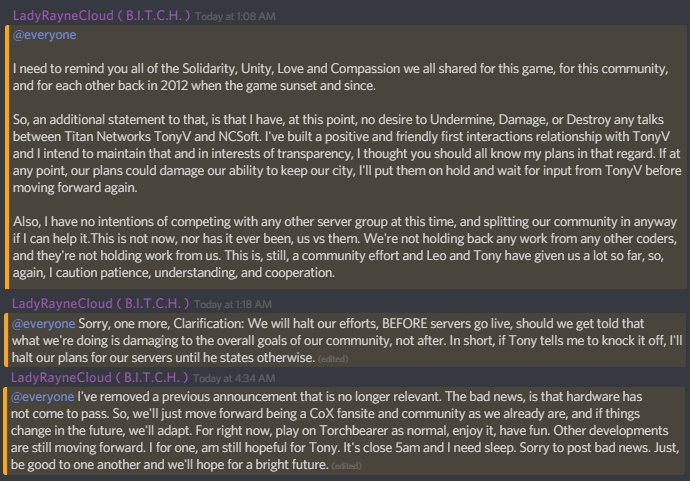 “We’re currently investigating how the community is able to financially support this server in a way that doesn’t put us in any legal jeopardy. The server is currently costing around $2100 per month, but there’s a reasonable chance we may have to scale up further for stability. In order to sustain the load from last night without major issues, the cost would likely go up to around $2700 a month.”

And it appears this may not be a test server after all – it may not even be wiped.

“Many of you have been asking how long this server will be around, and if there will be a character wipe at some point. The short answer to both of those questions is that we do not know yet. Our primary long-term goal is to ensure that the community has a stable server that we can all enjoy together in perpetuity. Right now we cannot say if his server will be that, but we are not closed off to that possibility. If for whatever reason that primary goal requires us to shut this server down or wipe the character database, then we will do that. Outside of fulfilling that goal, we don’t foresee any reason why a character wipe would need to occur.”